“It’s good to have family that you can rely on to work with because you’ve already developed that trust there,” says Joseph Doherty, leaning back in his chair. A steady blaze burns behind him in South Austin Trailer Park & Eatery‘s fire pit, surrounded by dozens of bright red picnic tables and sturdy live oaks strung up with lights.

Joe co-owns and operates Austin-based gourmet dessert food truck, The Holy Cacao, along with his two brothers, Matthew and JohnPaul. The Doherty brothers purchased the business in April 2013 when its former owners, who founded the company in 2009 and made it successful in Austin’s food industry, moved on.

“We just kind of swooped in there,” says Matt, the youngest. “I was sold when I first tried the hot chocolate and we really wanted to transition from managing restaurants to owning one and working for ourselves.”

Now, Matthew and Joe handle most of The Holy Cacao’s daily operations and those of their sister food trailer, The Holy Macaroni, with help from a handful of employees spread throughout the week.

“It’s hard work,” Joe explains. “People think, ‘I’m going to quit my job and start my own food trailer and it’s going to be wonderful,’ but in a lot of ways, this is much harder than working other jobs. You’re dealing with the elements. It gets really hot and really cold. There’s the day to day work and then you come home and there’s all the administrative stuff you have to do, too, so it’s challenging — rewarding, but difficult.” 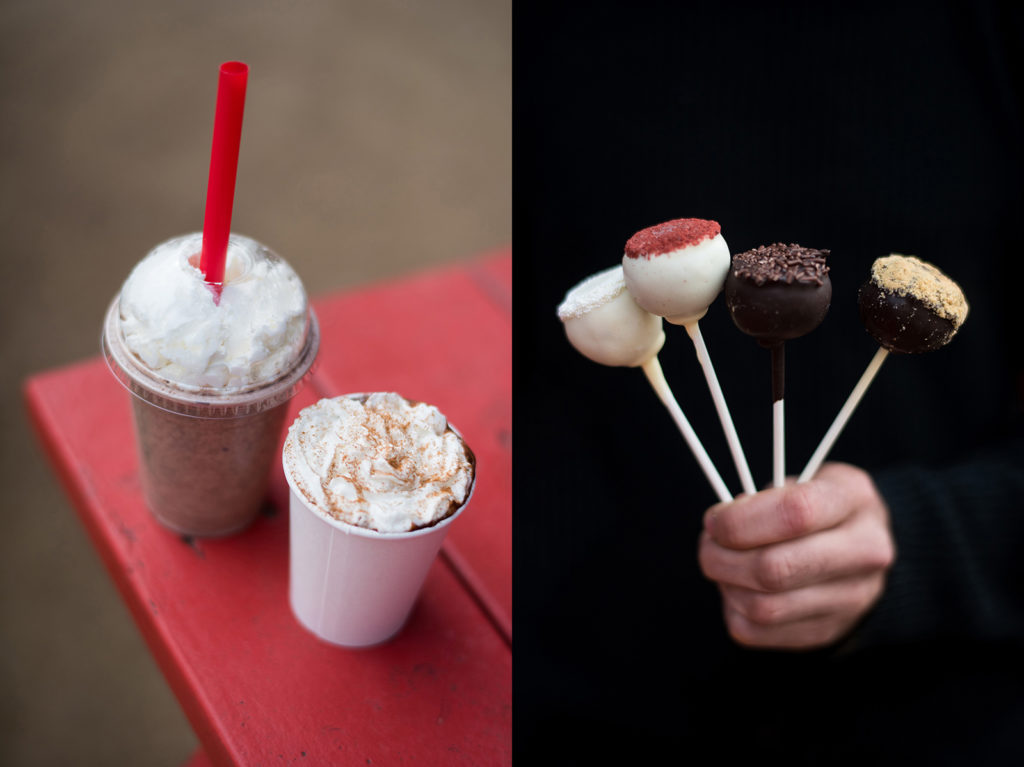 The Doherty brothers’ decadent operation has been featured by many a media outlet, including “The Rachael Ray Show” and The Food Network, as well as by plenty of local publications, and they’ve been named among America’s best cups of hot chocolate by Yahoo Travel, Travel+Leisure, and Zagat.

Back in 2014, we also sang The Holy Cacao’s praises by dubbing their hot cocoa as the most delicious in town — a classification we absolutely still stand by. So how have they done it? As Joe explained, it comes down to the unsurpassed quality of their product and the brothers’ refusal to cut corners.

“I feel like a lot of times, people use a mix or chocolate syrup,” he said. “We actually melt down 63% all natural dark chocolate into heavy dairy cream and milk to give our cocoa that dense chocolatiness and savoriness that sets it apart. It’s so rich, and yet it’s not super high in sugar. We’re very proud of it.”

For a leaner version of all of their offerings, the Doherty brothers stock three dairy milk substitutes — almond milk, coconut milk, and soy milk — and allocate those to be able to cater to vegan and gluten-free patrons.

Recently, The Holy Cacao even started selling espresso, drip coffee, and cold brew coffee, which they’re able to ensure are both fair trade and organic thanks to their local supplier, Texas Coffee Traders. What’s more, they only brew with filtered water and provide the option to add flavor shots and espresso shots to any drink. And while the Doherty brothers may not consider themselves a full-out “coffee shop,” adding joe to their menu has made them aware of certain developing trends in Austin’s food scene.

“I think it’s telling of how Austin has changed that there’s a Starbucks down on the corner there now,” Joe says, gesturing south to the intersection of West Oltorf and South 1st streets. “I feel like six or seven years ago, there would have been outrage over that and now there’s a big line there every day. There are four other local coffee shops on this very street who are all having to compete with Starbucks now.”

“I think someone told me once there’s like 3,000 trailers in town now, so it takes a lot to get people to know you’re there,” he continues, but not without optimism. “It’s kind of a reminder to us that we’re lucky to have a trailer that people think about sometimes. I couldn’t ask for much more. Hopefully, we all have bright futures.”

The Holy Cacao is closed every Tuesday, but don’t despair — you can still get your chocolate fix on any other day of the week. On Mondays, Wednesdays, and Thursdays, stop by between 9:30 a.m. and 9 p.m. On Fridays and Saturdays, visit during their 9:30 a.m. and 10 p.m. hours, and on Sundays, show up anytime from 9 a.m. to 9 p.m.

“We encourage people to BYOB here and put a little shot of whiskey, brandy, or Kahlua in their drink,” says Matt. “That’s definitely part of the atmosphere in this park, people just coming here, hanging out, and enjoying Austin together.” 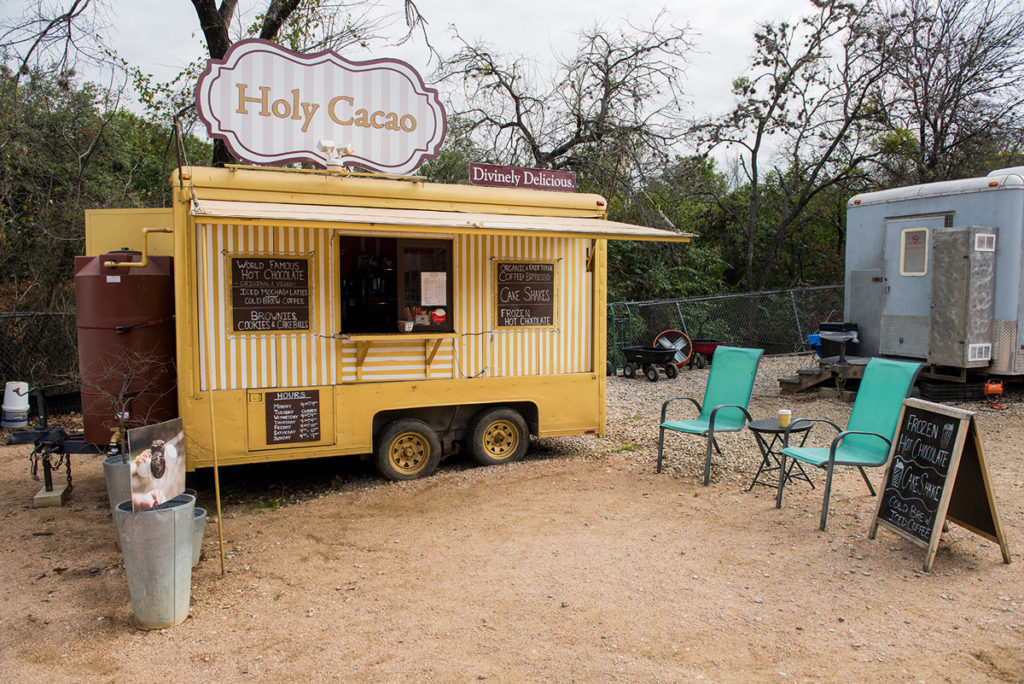 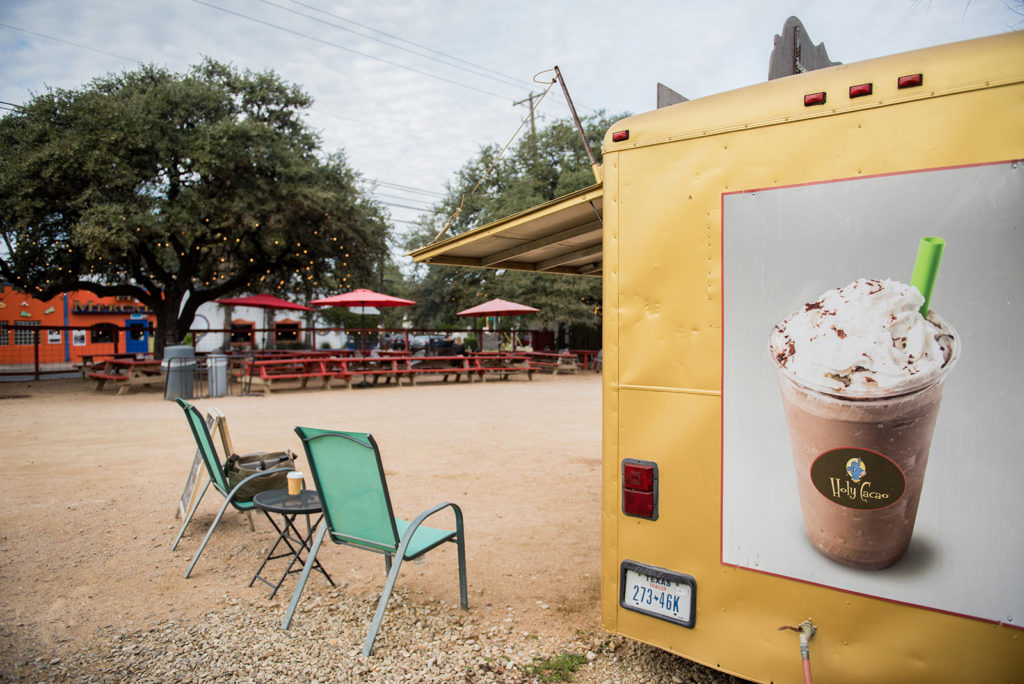 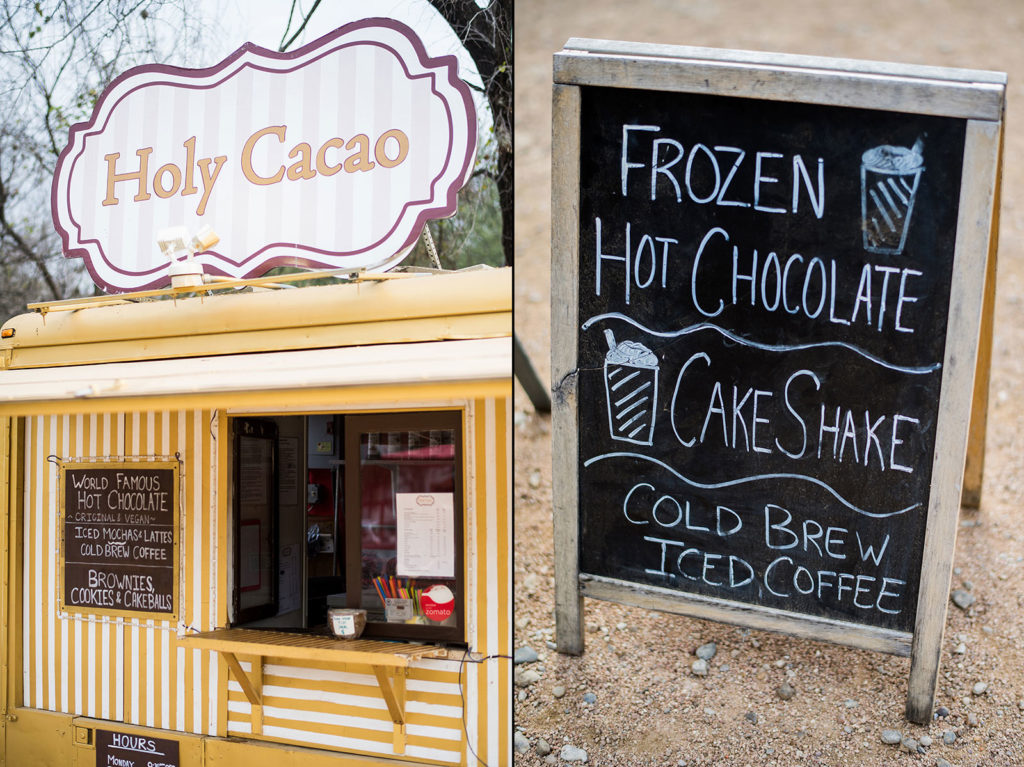