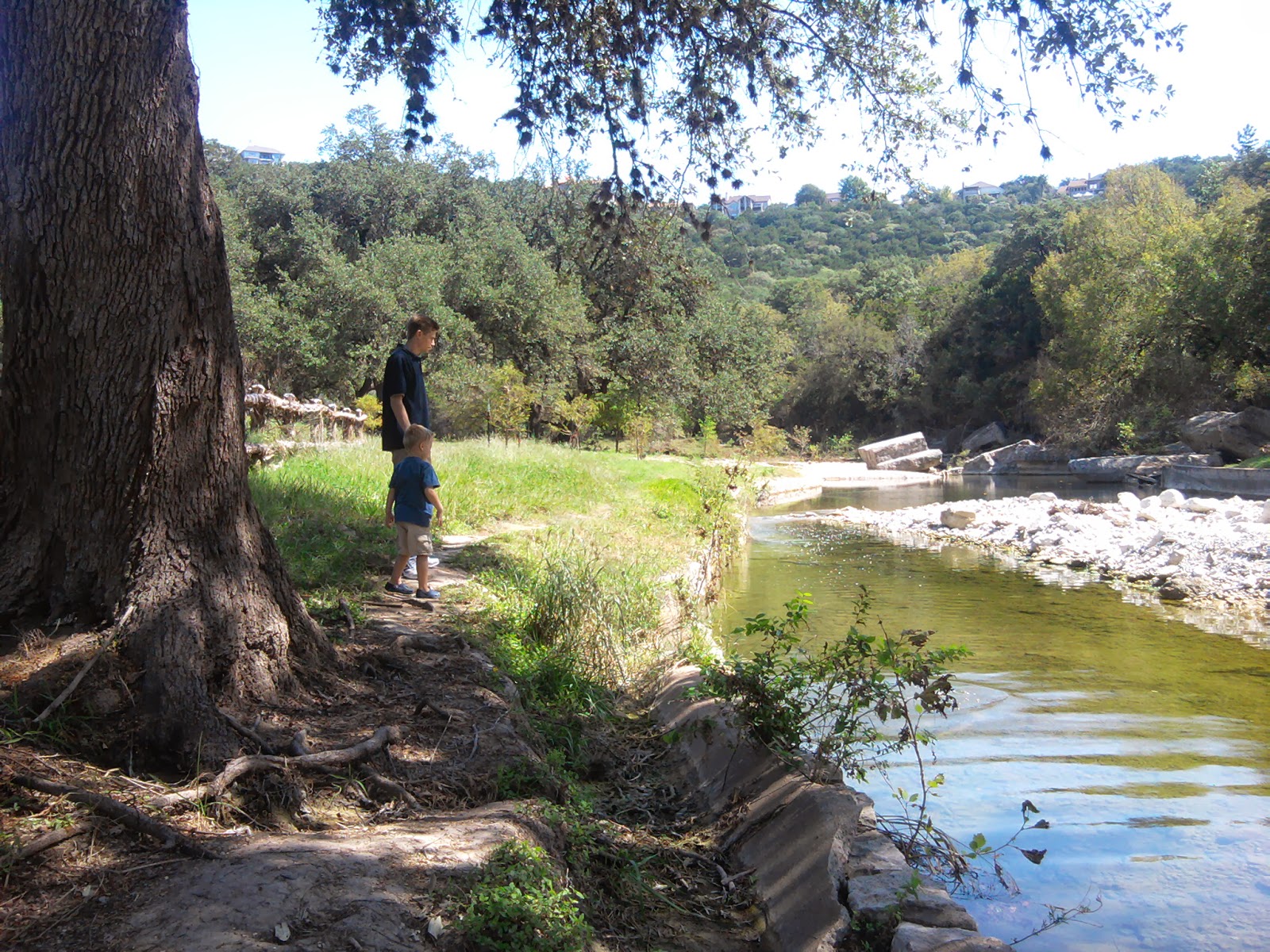 Hiking in the ATX: 10 Walks for Families in Central Texas

My kid has always loved the outdoors, and I find it a perfect antidote to the “I wants” and a great way to explore our area, at our own pace, and often, for free. It’s particularly gratifying when I am met by groans from the resident almost-8-year-old, only to have him later begrudgingly admit that he loved the new place we explored. It’s about the journey, right?!

One of my sources of inspiration is the book 60 Hikes Within 60 Miles, San Antonio and Austin, which you can check out from the Austin library. My husband and I did some of these hikes while I was pregnant, and we have done a few more with each new year. The book rates each hike by the level of difficulty, as well as providing information on the length and the approximate hiking time. In many cases, “hike” might seem like a misnomer, since the terrain is pretty flat, but even a walk can get your heart pumping if you are chasing a toddler who comes precariously close to the water’s edge, if you are carrying the makings of a picnic or if you are wearing your youngest while having to carry your oldest (so much for best laid plans). Usually our outings take about three hours from start to finish, which includes driving, so we also get plenty of time to talk about everything under the sun, which usually involves my husband and I hearing a lot about LEGO.

We’ve stuck to the hikes in the book which are close to Austin, but now that my son is older, I think we are up for venturing out further, so I’m looking forward to doing the ones in the Hill Country. Here are a few of our favorites, from the book and our own experiences, listed in alphabetical order:

Bull Creek Trail. FREE. Bull Creek is an entire greenbelt in and of itself, although the shade of green is dependent on the amount of rain we have received. In the summer, some spots can get a little icky if water is stagnant, but right now, the Creek is benefiting from what I can only guess is the water deposited during the Halloween floods. Here’s a great description of the trail and what you will encounter along the way. Depending on the weather, you may see lots of other people and dogs. During the late spring, we catch tadpoles near the intersection of Spicewood Springs and Old Spicewood Springs, and we have spotted water snakes and turtles while we have been wading. We’ve gone to Bull Creek Park before to skip rocks and climb on the rocks, as well. Since the park changed from being leash-free to an on-leash park, it’s a little less congested for human visitors. The trail length is four miles, but of course you can shorten that if you need to or just do one part or by starting at a different access point. We’ve also enjoyed the St. Edwards Park Trail, which begins outside of 360. 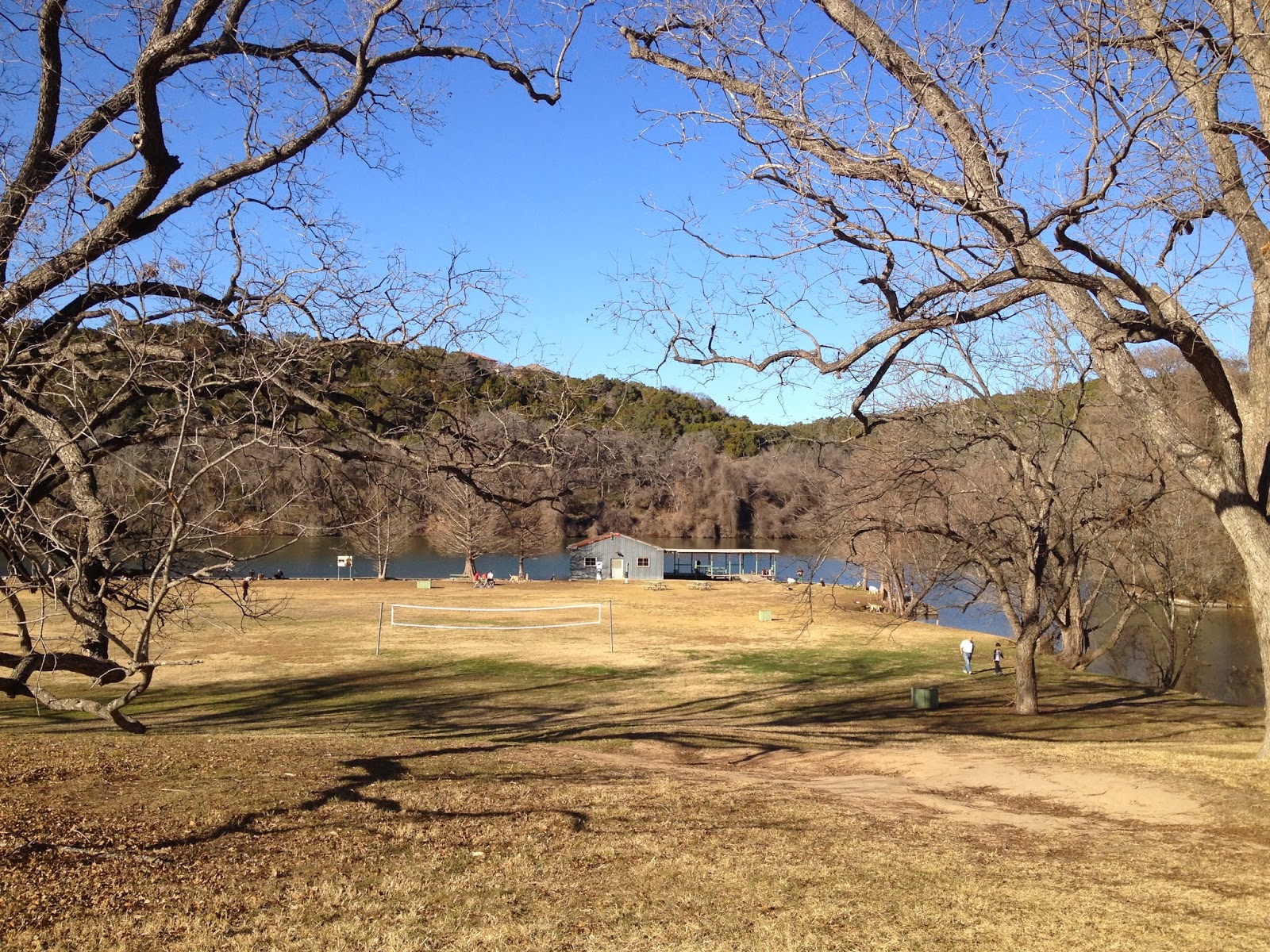 Commons Ford Ranch Loop. FREE. Commons Ford is a city-managed preserve in southwest Austin. The trail is only 1.2 miles, but we spent several hours there recently, from exploring a restored cabin to picking pecans (which we had no idea were there until we noticed other visitors walking away with baskets full), to watching dogs gleefully retrieve balls from Lake Austin. The high point is probably the area closest to Lake Austin, which has an open field where several people had spread out blankets to read and a handful of families and their canine companions were enjoying Austin’s beautiful January weather. A volleyball net was up in the grass, and there is a dock with picnic tables to enjoy the Lake. There is a lot of room to explore at Commons Ford, and trails aren’t super well-marked, which makes you feel more like you are off on an adventure. We didn’t notice any restrooms, so you might want to take care of that before you head out. We did notice that many ants also make the Park home, so pay attention to where you step! 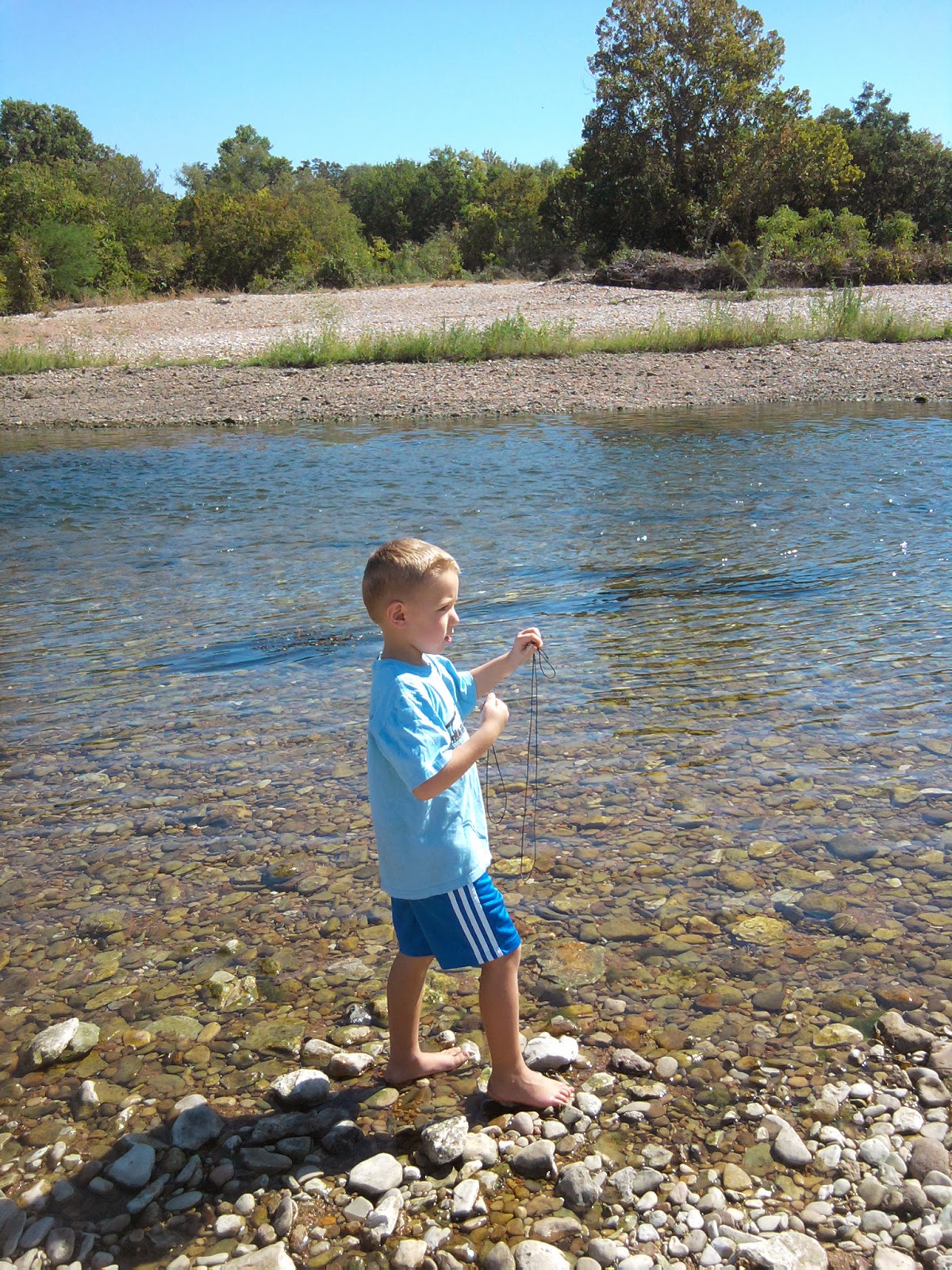 Roy G. Guerrero Colorado River Park Walk. FREE. I attended a grand opening at the Roy G. Guerrero River Park years ago, when the site was envisioned as East Austin’s own Central Park. Since then, lots of amenities have been added, but it’s still largely a secret to Austinites who don’t live closeby. One of the most recent discoveries there was the Secret Beach you can access through the park, which Heidi Okla wrote about last year. The park trail is 4.8 miles and takes you all the way past the Longhorn Dam to Pleasant Valley Road and onto the Lady Bird Lake Hike and Bike Trail. We haven’t taken the whole extent of the trail, as we were waylaid by the playgrounds, but it definitely feels like you are off the beaten path. 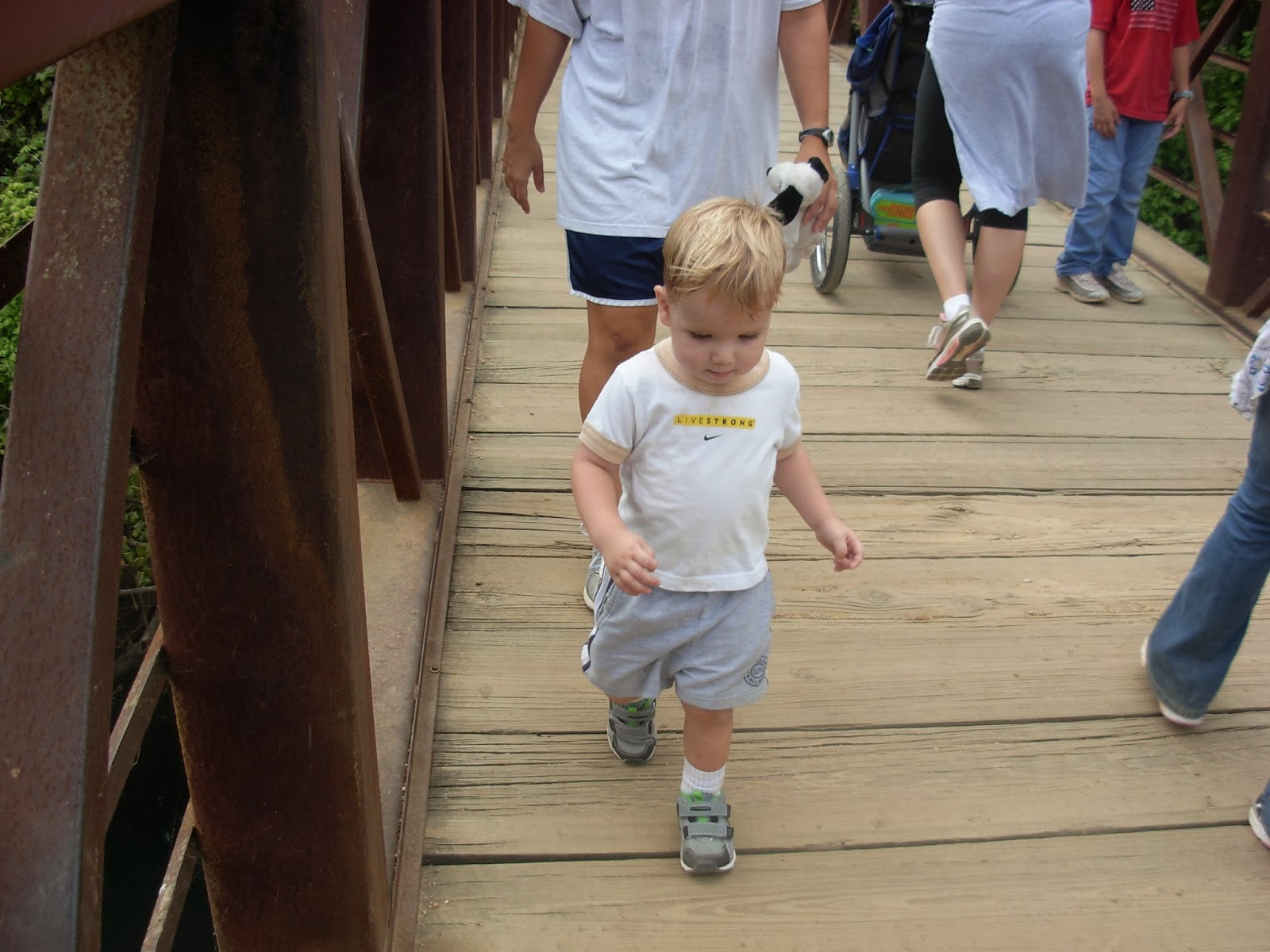 Lady Bird Lake Hike and Bike Trail. FREE. Yes, it’s probably Austin’s worst-kept secret, but the Hike and Bike Trail is a nice place to enjoy being outdoors in Austin. The main loops are 3.1, four and five miles and the further east you get, the less crowded the trail becomes. What you might not realize is that if you park at Austin High, you can take the trail west on the north side of the Lake to Deep Eddy. There is a small dock which is great for feeding the ducks and a playscape at Eilers Park. This would be perfect for toddlers or kids who aren’t up for much of a hike. Otherwise, the trail can get pretty congested and it can be hard to keep your kids from getting in the way of runners and bikers, but there are a few spots with more elbow room: Lou Neff Point (another spot for duck feeding — you could walk there from the Zilker Playscape if you are feeling ambitious), Vic Mathias Shores (formerly Auditorium Shores) and Shoal Beach, the area where Shoal Creek empties into Lady Bird Lake, north of the Lake and just east of Congress. 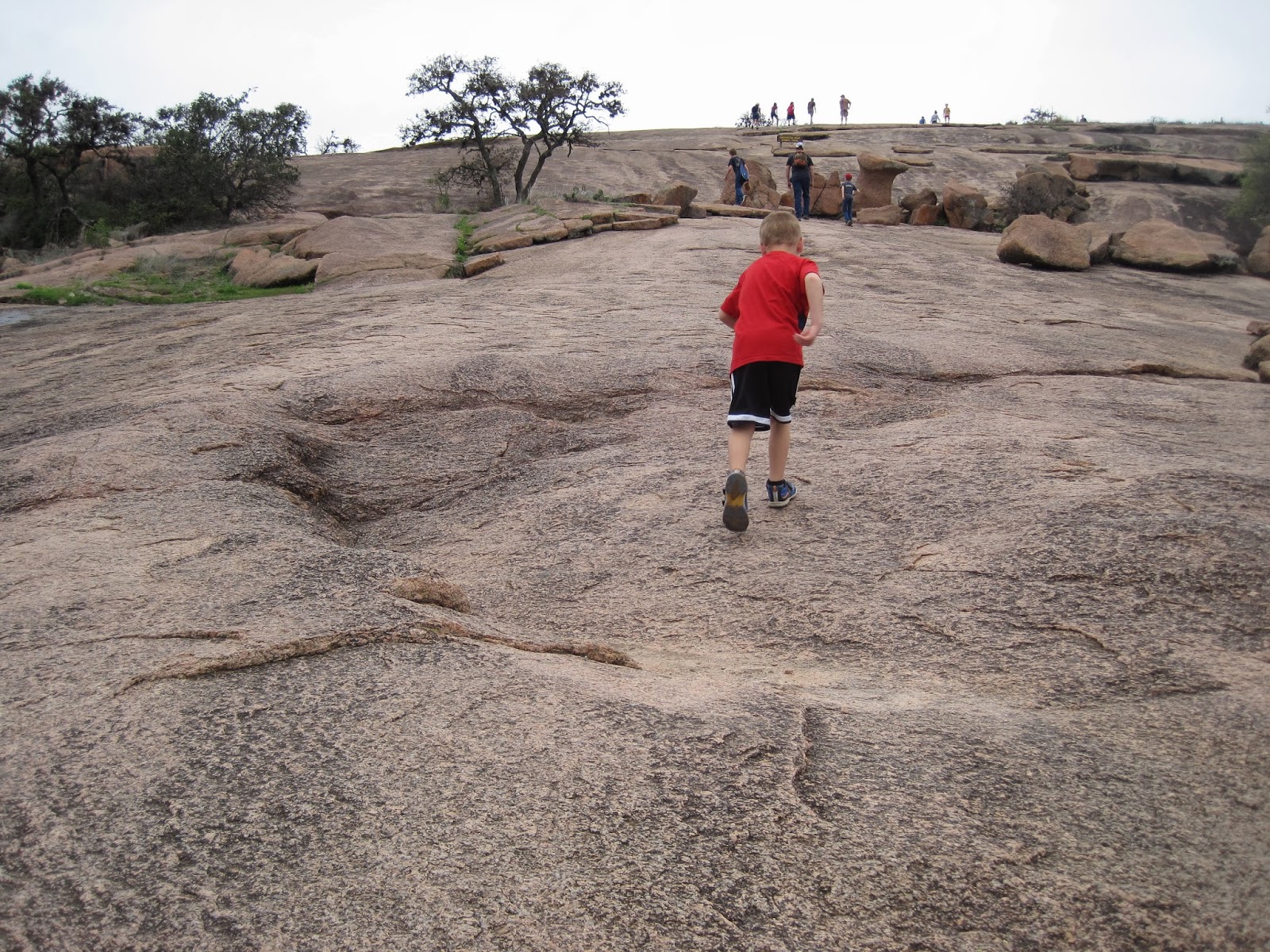 The Summit Trail at Enchanted Rock. $7/adult daily, children 12 and under FREE. As far as Central Texas goes, Enchanted Rock is our Kilimanjaro. The Summit Trail is a mere 0.6 miles, but due to a change in elevation of 425 feet, it is sure to get your heart pumping. More adventuresome hikers can try the Loop Trail, which is 4.1 miles. The trail is extremely popular, especially September through May, so do your research to ensure you will get in (only a certain number of visitors are let in at one time, as you will notice if you make it there first thing and see a long line of cars waiting to get in). We traveled over Spring Break and so we were able to get to the Park right when it opened. Making the hike up to the top of the summit is definitely something every Austinite should do! 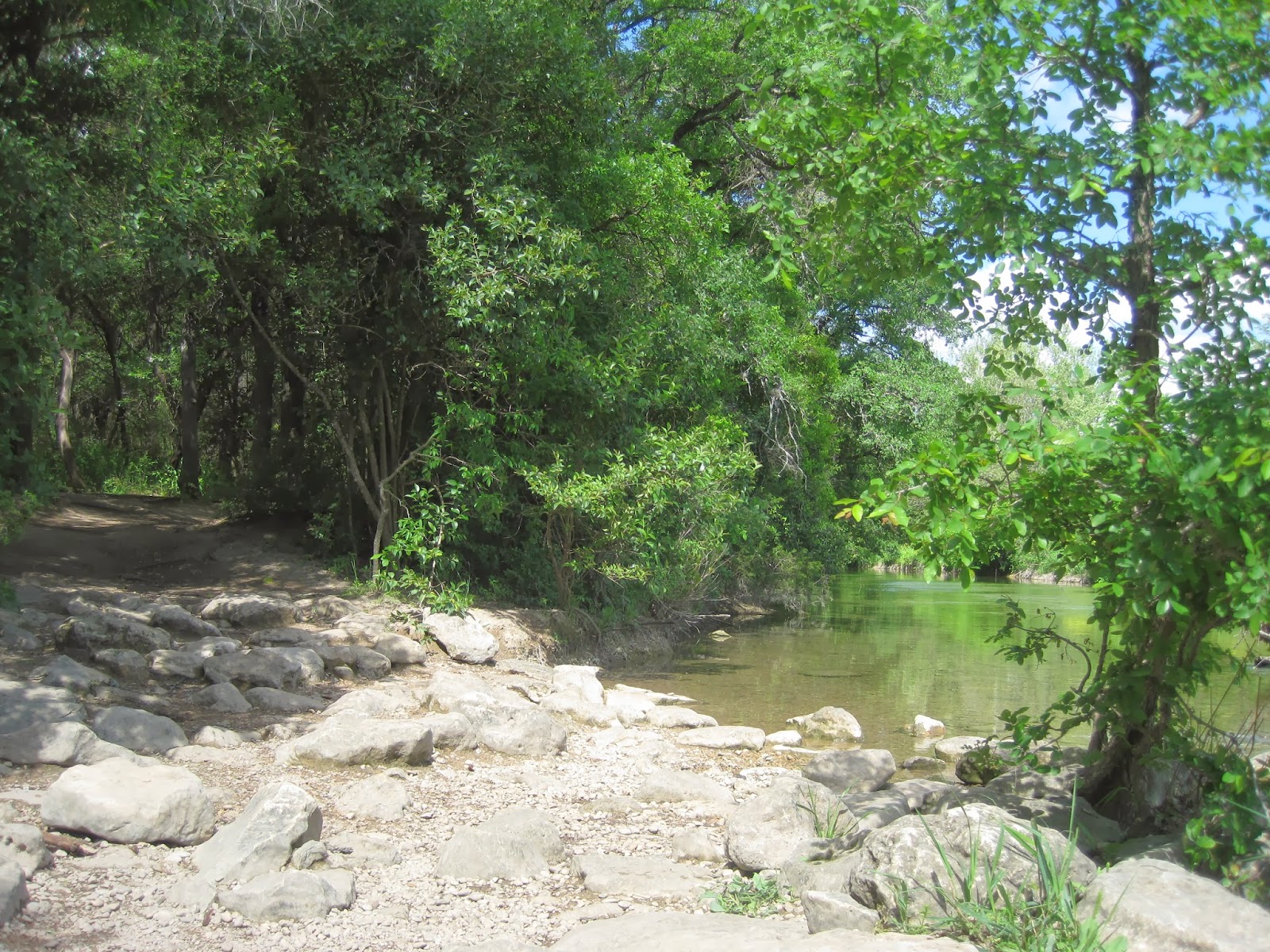 Lower Barton Greenbelt. FREE. The Greenbelt is another not-so-well-kept secret, as you can witness by the number of cars on the access points along Mopac. Of course, the good news is that families wake up earlier than most folks, so you can head on down early to avoid the crowds. The Lower Barton Greenbelt Trail begins at Barton Springs Pool and heads all the way down to Twin Falls. We’ve never done the entire trail, but we have hiked from the Spyglass Trail (bonus: right next to Tacodeli) and also entered on the Loop 360 Access. The water levels vary depending on the time of year. It’s sometimes fun (and harrowing) to watch the rock climbers along the creek banks. 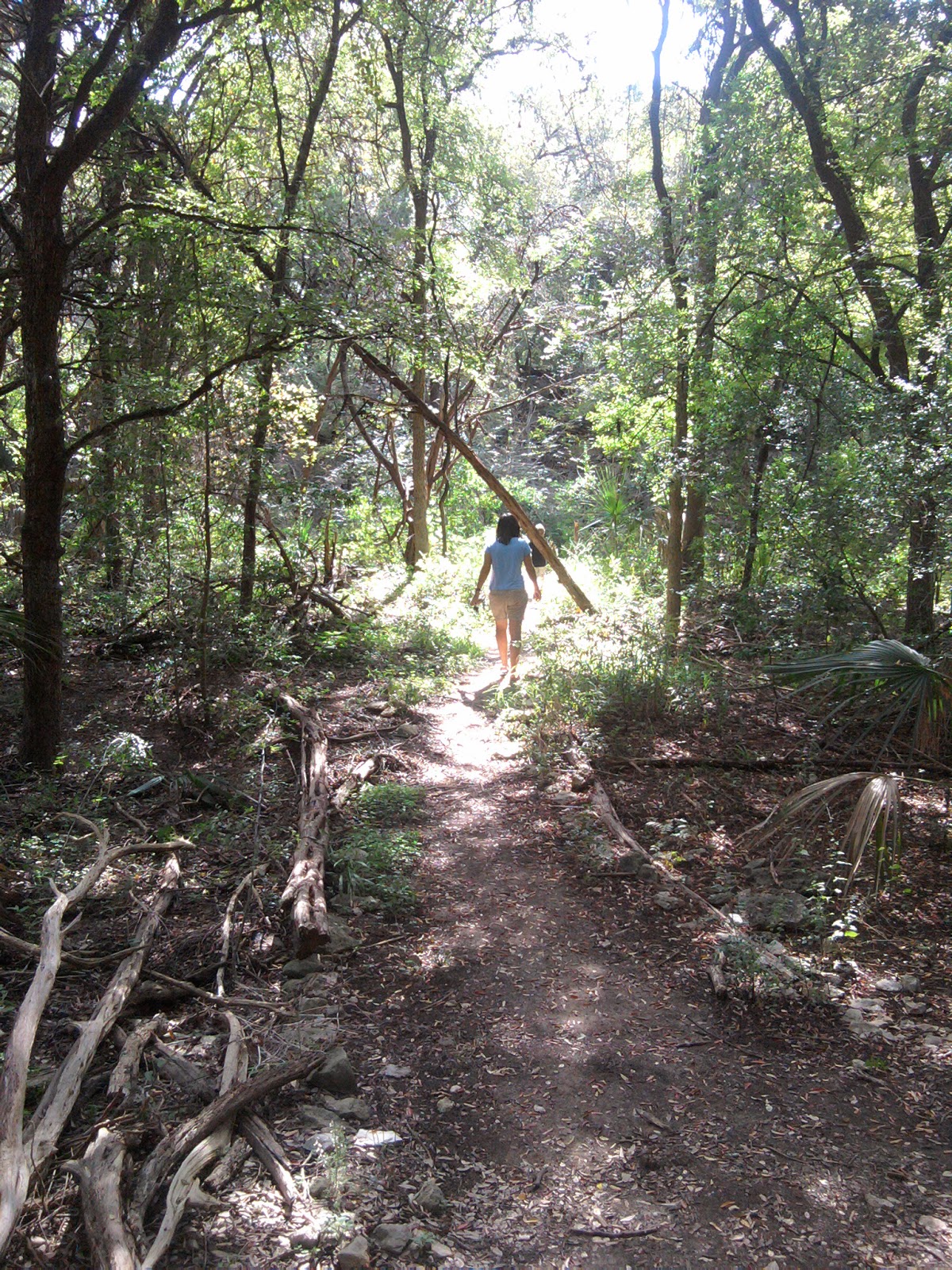 Mayfield Preserve. FREE. Mayfield Park is such a unique place, located so close to downtown, yet seemingly worlds away at the same time. Yes, there are the peacocks, yes, there are the ponds and gardens, but have you ever explored the trails behind the grounds? The one mile walk takes you through the woods along Bull Creek in a series of interconnected trails. It can be a little difficult to decide where to go exactly, since there are so many options. But, don’t worry; it’s nearly impossible to get lost here for long. If you are ready for more hiking when you are done, you can always head next door to walk the grounds of Laguna Gloria. 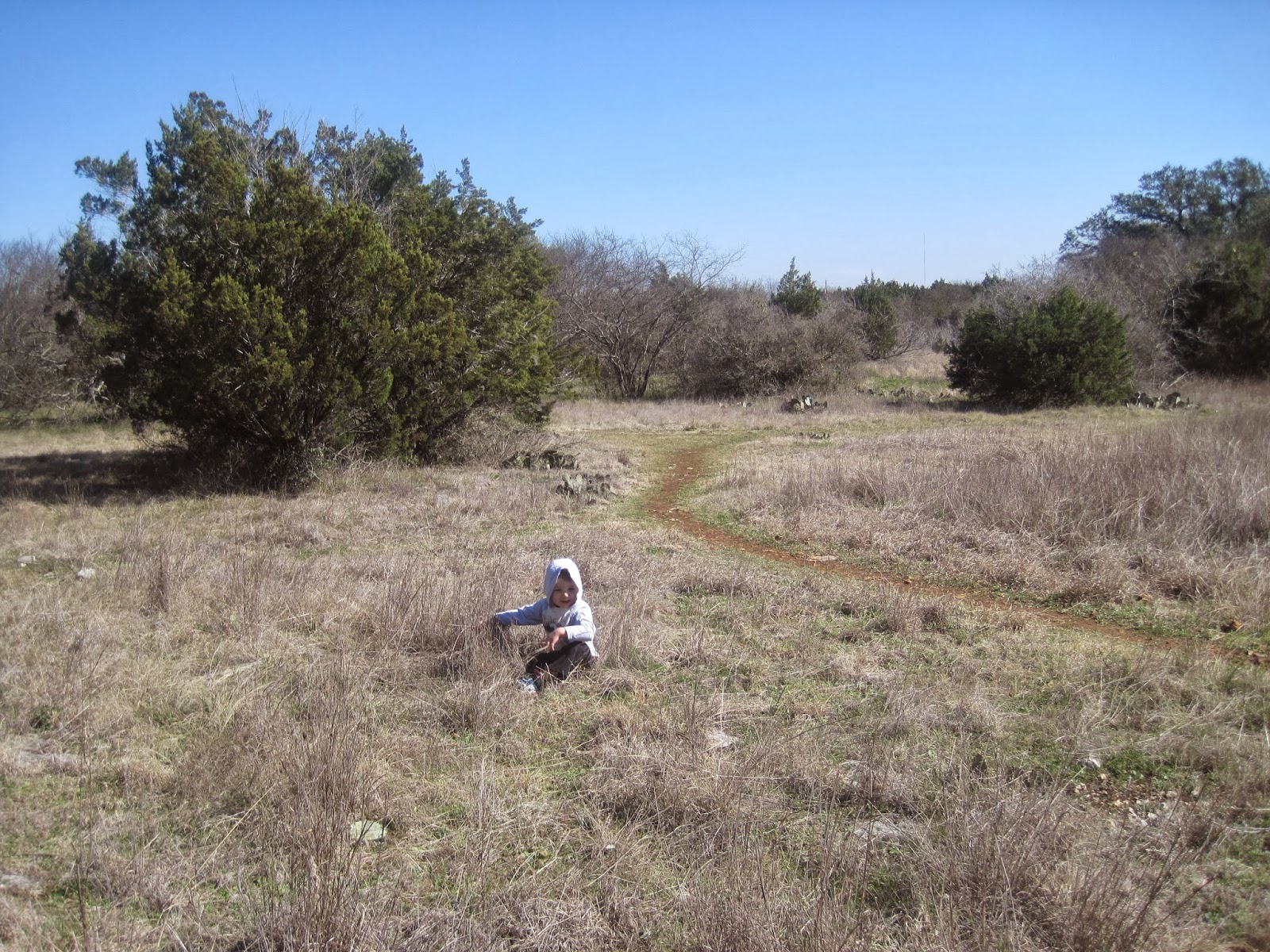 Dick Nichols Park Trail. FREE. Dick Nichols Park is a well-loved park for Southies, and for good reason. There is plenty to do there for families, from volleyball to a pool in the summer months to all types of playground equipment. There is a one mile long paved trail, but there is also a two mile trail which takes you next to a creekbed. We didn’t make it too far, as our kid was distracted by all the other fun things to do at the park, but by all accounts it’s a nice, easy hike. 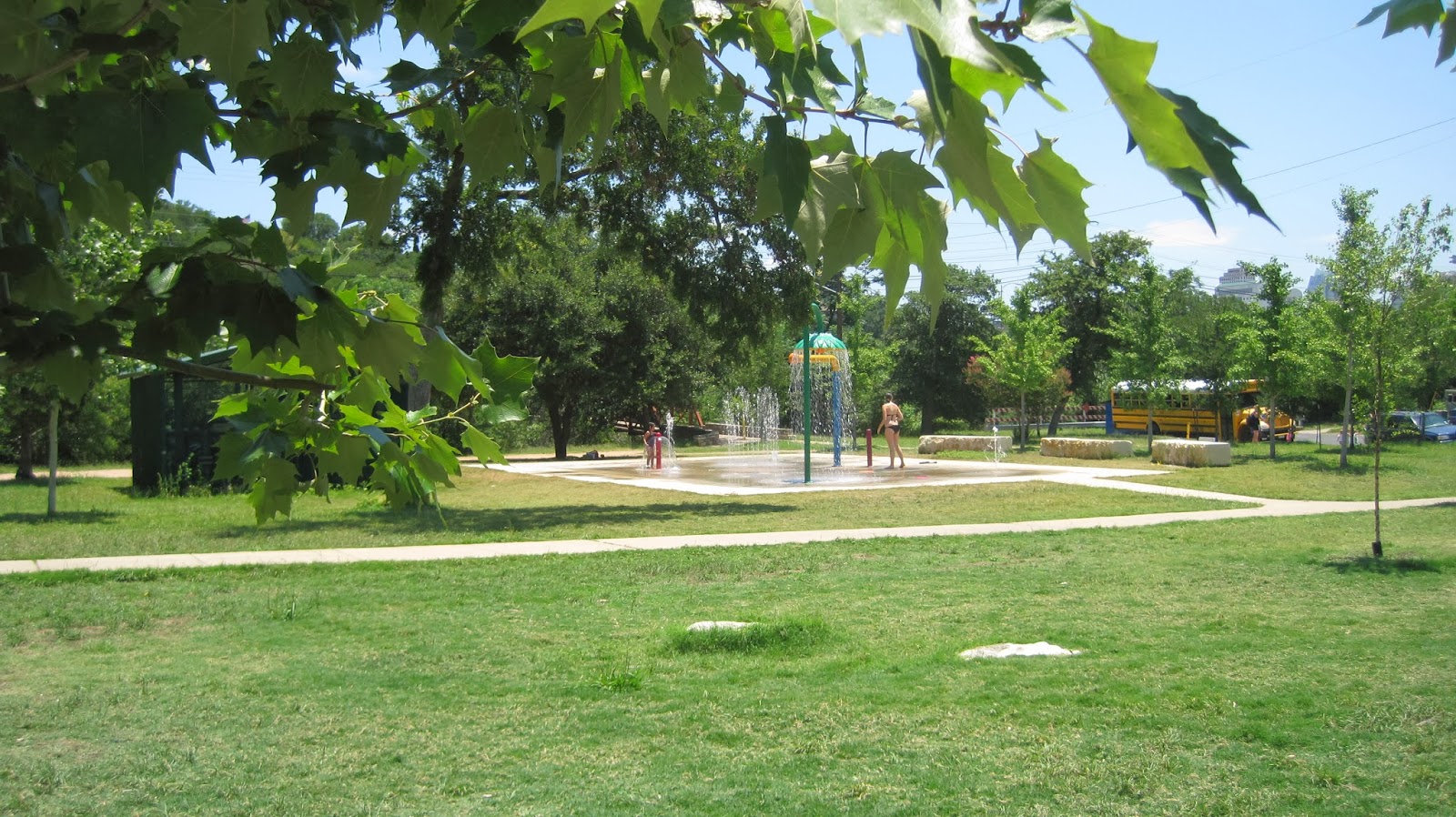 Shoal Creek Hike and Bike Trail. FREE. Shoal Creek has a lot in common with the Lady Bird Lake Hike and Bike Trail, with its multiple access points, kid-friendly stops (Pease Park, for one), restrooms and water nearby.  But the Trail seems to be less crowded, particularly the further north you go. We have always started at Pease Park and have done some exploring in the Creek on the way, which is a great place to find fossils. Surprisingly, the Trail goes all the way up to 35th Street, but I’ve never made it that far with my kid. 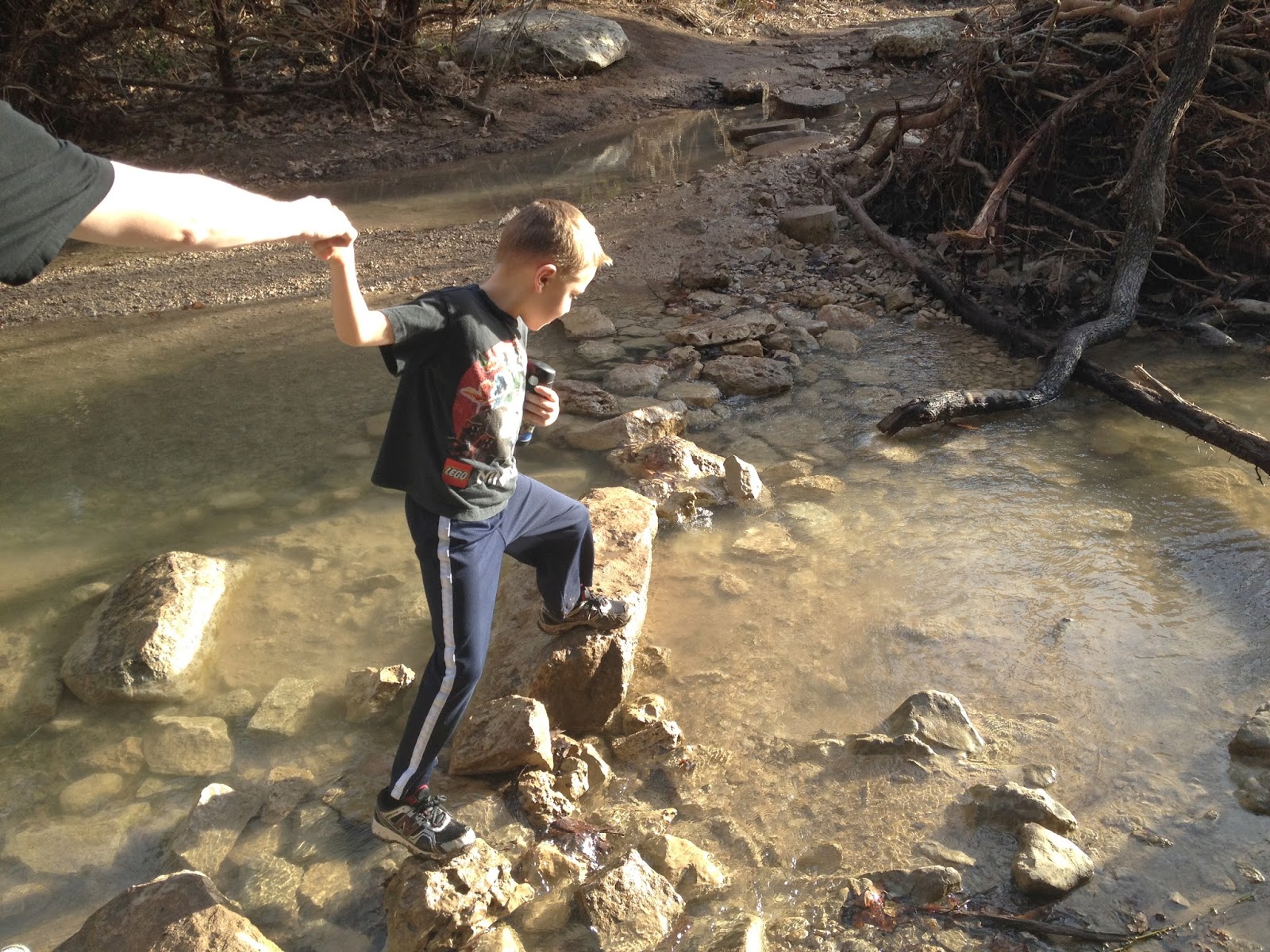 Turkey Creek Trail. FREE. We recently discovered Turkey Creek, which starts just outside Emma Long Metropolitan Park, just before the paid admission ranger’s station. This is a major hub for canine outings, so we were sorry we didn’t bring our furry family member, but we still had fun crossing the many creek crossings, enjoying the shade and finding the fern grotto about halfway into the 2.5 mile hike. This hike probably had the most elevation of any we have mentioned thus far, with the obvious exception of Enchanted Rock, but it was by no means impossible. There are no restroom facilities, and the parking lot only holds about 20 cars, so we ended up parking quite a ways up the road on a nice day in an attempt to avoid parking directly by signs along the road which say No Parking.