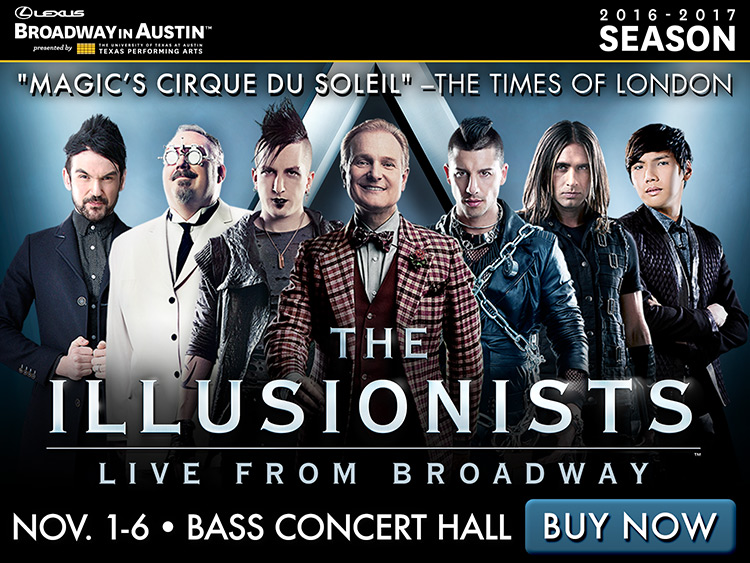 Giveaway: The Illusionists Live from Broadway at Bass Concert Hall

Don’t miss the Austin premiere of THE ILLUSIONISTS – LIVE FROM BROADWAY at the Bass Concert Hall November 1-6, 2016! On the heels of a highly successful multi-city tour and run on Broadway, the world’s best-selling touring magic show, THE ILLUSIONISTS – LIVE FROM BROADWAY is coming to Austin with Lexus Broadway in Austin presented by Texas Performing Arts as part of its current North American tour of more than 50 cities.

Full of hilarious magic tricks, death-defying stunts and acts of breathtaking wonder, THE ILLUSIONISTS has shattered box office records worldwide and thrilled audiences of all ages with a mind-blowing spectacular showcasing the jaw-dropping talents of seven of the most incredible illusionists on earth.

Creative Producer Simon Painter said, “We can’t wait to bring this electrifying show to Austin for a truly entertaining experience for the whole family. THE ILLUSIONISTS is the most non-stop and powerful mix of outrageous and astonishing acts ever to be seen on the live stage.”

The seven stars, each a master in their own field, are:

Interview with The Trickster, Jeff Hobson

We were delighted to have the opportunity to interview The Trickster, Jeff Hobson. Learn more about this delightful entertainer, who “delivers a refreshing and clever mix of comedy and magic,” then make plans to see him in THE ILLUSIONISTS LIVE FROM BROADWAY, November 1-6!

What initially sparked your interest in performing? How did you hone your craft?

At age 7, I saw a magician at my school and I was hooked immediately. I then delved into every magic book I could find and taught myself.

What drove you to want to do the “impossible?”

I remember the feeling I had of absolute wonder when I saw my first magic show and I want to create that same emotion in my audiences every night.

Was there a moment when you were discovered and thrust onto the national or international scene?

An appearance on my first, live, nationwide television show was quite stressful but did well for me. Entertainers still get most famous or “discovered” from TV appearances. Unfortunately, with the internet, it’s difficult for anyone to be famous for long unless you’re constantly in the spotlight.

How did The Illusionists come together?

A simple phone call from the producer who sought to find the best magicians in the world. I was very blessed to be on his list. At first I was skeptical when he told me that we would open at the Sydney Opera House. Well it happened and that was five years ago and we are still going strong.

How many countries have you visited with The Illusionists tour? Where is the most interesting place you have performed?

Besides Australia and New Zealand, we toured Europe with countries like Germany, England, Scotland, Hungary, Italy, Czech Republic, Slovakia and more. The most interesting place was Karlovy Vary in the Czech Republic. In my opinion, it’s the most beautiful city on earth.

What do you hope the audience will take away from your show?

I would hope that our audiences experience many emotions that are not normally associated with a magic show to give them an unexpectedly wonderful roller coaster of drama, suspense, humor, amazement and wonder. Even though this is not advertised as “kids” show, children are welcomed and encouraged to attend. It’s a show for everyone since every person needs to experience wonder.

About The Illusionists – Live from Broadway

Enter for a chance to win a pair of tickets to THE ILLUSIONISTS LIVE FROM BROADWAY for Opening Night, Tuesday, November 1, 2016 at Bass Concert Hall on The University of Texas campus.  The winner will be notified by email on Thursday, October 27 with ticket pick-up instructions.
Loading…

Pull Over! These 10 Family-Friendly Tourist Stops in Austin Can’t be Missed!

- December 3, 2020
Here’s How to Send Letters to Santa Through the USPS Operation Santa Program 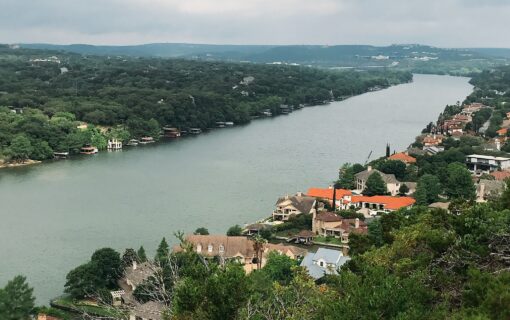 The Westlake neighborhood offers some of the most stunning homes in Austin. Learn more about the neighborhood's restaurants, activities, and more.
- December 2, 2020
Giveaway Alert! Here’s How To Win a $300 Shopping Spree

Just in time for the holidays, you could win a $300 giveaway thanks to Preston Pest Control. Here's how to enter!