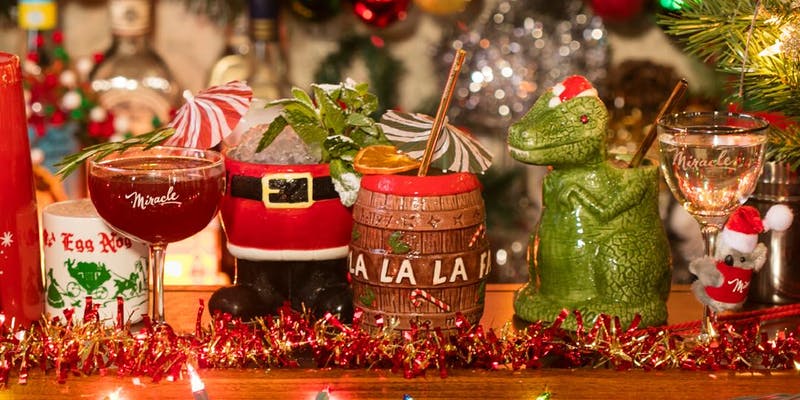 Looking to get your drink on while celebrating the season? Lucky for you, this year there are more Austin holiday themed pop-ups and specialty menus than ever before!

Here are 22 holiday themed bars and restaurants in Austin!

Miracle on 5th Street
Through December 29 | The Eleanor, 307 West 5th Street
Austin’s favorite Christmas cocktail pop-up bar is back for its third season. The 2019 cocktail menu features exciting new frosted features like the SanTaRex cocktail and a new Mistletoe shot. Last year’s addition of The Shot Ski Lodge returns for 2019 as well.

Lucille’s
Through December 31 | Lucille’s, 77 Rainey Street
Lucille’s on Rainey Street is fully decked out in Christmas decor (until they tear it all down and decorate for the NYE bash)! Their specialty drinks include the Apple Sauced, Lucille’s Mulled Wine, Drunken Gingerbread, and S’Mores Hot Chocolate.

Latchkey XMas Party
December 16 | Latchkey, 1308 East 6th Street
Ho ho, oh yes! On December 16, Latchkey will be hosting an Xmas party with $3 beer and shot specials all night long, a gift card extravaganza game, shot skis, and more. We’re guessing the decor will be up throughout the month though.

Lala’s Little Nugget
Always | Lala’s, 2207 Justin Lane
Lala’s is decked out for Christmas all year round, so there’s no better place to get in the holiday spirit. Their signature cocktails include: Reindeer Water, Santa’s Irish Coffee, and Naughty Little Nugget. Their Jolly Hour is every Monday through Thursday from 4 to 7 p.m. with $2 domestic bottled beer, $3 tall boys, and $3 well drinks. Additionally, Lala’s will be hosting Lala’s Christmas Stocking Event which will donate to blind children in Texas.

A Krampus Carol at the W Austin
December 12 through 25 | W Austin’s Secret Bar, 200 Lavaca Street
The Secret Bar at W Austin will be all done up and decked out for Xmas this year for their Krampus themed Xmas – A Krampus Carol. The Secret Bar will have cocktail specials and a decadent Hot Chocolate Bar (with options to spike) and décor to go along.

Nostalgic Noel at Cavalier
December 19 through 28 | Cavalier, 2400 Webberville Road
Join in on childlike holiday fun as the Cavalier reminisces about favorite 80’s & 90’s toys and cartoons – in cocktail form! Peer through the ViewMaster menu to choose your most sentimental sips. Their Hot Buttered Battle Cat will surely give you the power of Greyskull with a kick of rum and holiday spices. You won’t feel like an eeeediot drinking Western Grace Brandy’s Ren & Stimpy house made horchata featuring chocolatey mesquite bean extract (though you may get the “Log” song stuck in your head…”it’s big, it’s heavy, its’ wood!”). Spin the Seek & Say wheel to determine the final component in your Dexter’s Laboratory elixir. Enjoy the full food menu daily from their scratch kitchen including hand-battered chicken tendies (for grown-ups!), pimento cheese, and more.

Gingerbread Village at the Four Seasons
Throughout December | Four Seasons, 98 San Jacinto Boulevard
Inspired by the magic of snow globes, the 2019 Gingerbread Village includes dozens of tiny edible houses representing one of the biggest concepts of them all: friendship. Free and open to the public 24 hours a day, the festive display depicts an Austin village surrounded by gingerbread scenes from five of Austin’s global sister cities.

Holidean’s at Line Austin
Through Mid January | Line Austin, 111 East Ceasar Chavez Street
The LINE Austin is dressing up Dean’s One Trick Pony as Holidean’s until mid January. They are serving up holiday cocktail specials like the Wild Sleigh Ride made with Mexican chocolate ice cream, vodka. and peppermint as well as a cinnamon hot toddy called Naughty or Nice.

Donn’s Depot
Through December 29 | Donn’s Depot, 1600 West Fifth Street
It basically feels like Christmas all year round at Donn’s but they really outdo themselves for the holidays. They’ve even planned some special events this year. Keep an eye on their Facebook page for details.

Revelry Bars
Throughout December | Revelry Kitchen + Bar, 1410 East 6th Street, and Revelry on the Boulevard, 6215 North Lamar Boulevard
Revery Kitchen + Bar and Revelry on the Boulevard are turning into winter wonderlands for the holidays! Enjoy over the top festive decor, themed holiday cocktail menus at each bar, and holiday themed events such as a Doggy Sweater Party on December 7 and a Holiday Bar Crawl visiting both Revelry locations and Corner Bar on December 20.

Corner Bar
Throughout December | 1901 South Lamar Boulevard
Corner Bar is also turning into a winter wonderland for the holidays! Like its sister bars, guests can enjoy over the top festive decor, a themed holiday cocktail menu, and holiday themed events such as a Doggy Sweater Party on December 7 and a Holiday Bar Crawl visiting both Revelry locations and Corner Bar on December 20.

Lifesize Gingerbread Dining Room at Stella San Jac
Through January 1 | Westin Austin Downtown, 310 East 5th Street
Stella San Jac invites you to witness its Life-size Gingerbread Dining Room. The giant gingerbread house is an extension of the restaurant, Stella San Jac, and will serve a special holiday menu. This year, the theme of the house is centered around Christmas Vacation, so here’s hoping uninvited family don’t show! Bonus? A portion of the proceeds from the space is donated in full to Back on My Feet Austin, making it easier than ever to give back during the holiday season.

Mozart’s Annual Light Show
Through January 5| Mozart’s Coffee Roasters, 3825 Lake Austin Boulevard
Starting at 6 p.m. each evening, and replaying at the top of every hour until closing, enjoy dazzling lights set to music!  The lights show will happen every night, excluding Thanksgiving and Christmas Day.

The South Pole at Geraldine’s
December 17 through 21 | Geraldine’s at Hotel Van Zandt, 605 Davis Street
This holiday season, Geraldine’s is treating Austin to some TexMas
hospitality—South Pole-style. From December 17 through 21, starting at 6 p.m., the restaurant perched on the fourth floor of Hotel Van Zandt will host a holiday pop-up complete with a snow machine, cozy igloo lounges on the pool deck with views of downtown Austin, an artisan market, holiday-themed cocktail menu, appearance by Southern Santa, and of course, the return of Geraldine’s annual Motown Christmas performance.

Kitty Cohen’s Hanukkah Themed Get Lit Pop-Up
December 18 through 30 | Kitty Cohen’s, 2211 Webberville Road
The East Austin bar will be decked out in blue and silver and feature specialty drinks like Slivotinis and Latke Punch. A proceed of the profits from the pop-up will benefit Shalom Austin.

Did we miss one of your favorite holiday bars? Let us know and we’ll add it to the list!

Looking for more holiday fun?
Check out these posts: