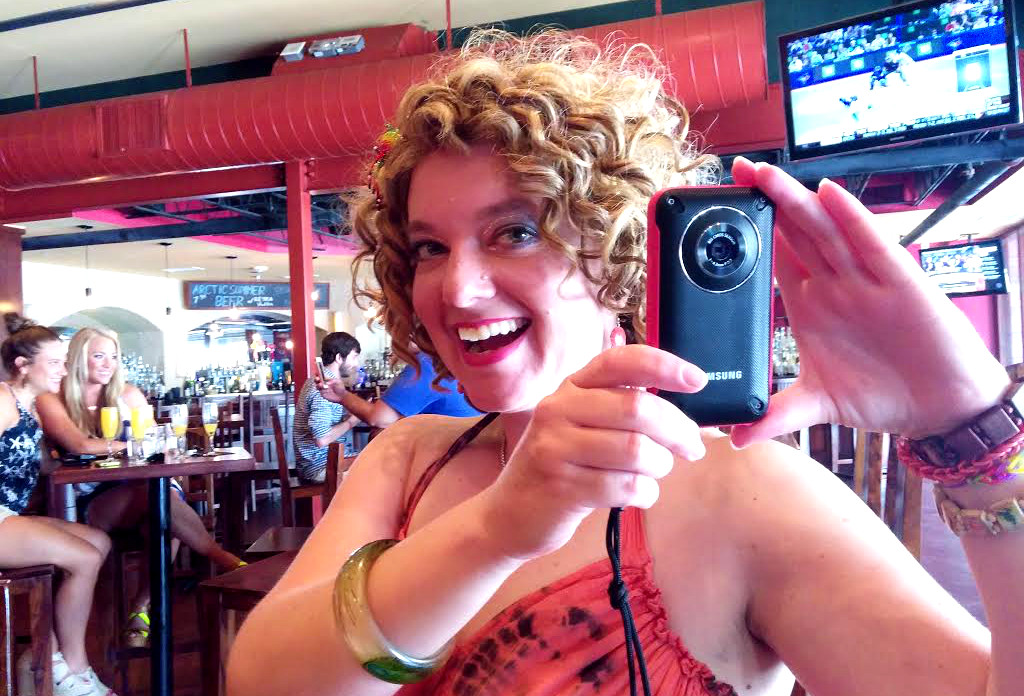 Get Your Day Drinkin’ On with Austin’s Own Arcie Cola

Have you ever flipped on the TV late one night while you’re drifting into a boredom coma, unaided by the droll entertainment options afforded at the odd hour, only to stumble across something really, really weird on Austin’s local-access cable network?

If you’re like many an Austinite, you may have been lucky enough to stumble across Channel Austin when they’re airing one of Arcie Cola’s programs. Her new show, which Arcie launched last October, is called “Day Drinkin’.” (You can watch the most recent episode in the video above, and her interview with Daniel Webb — aka, Obama’s fist-bump buddy — was posted on Austin.com earlier today.) We caught up with Arcie recently for a chat at the bar 219 West on 6th Street, just before she filmed an upcoming episode of the show, and posed a simple question: “What do you love to most about Austin?”

“I love that, even though it’s growin’ and it’s difficult to navigate and hard to pay the rent, there’s still a vibrancy to this city that’s enticing but also welcoming,” she added. “It’s not like the Devil callin’ you. It’s like your aunt, your crazy aunt. You love her, you may hate her, but mostly you love her. She’s always wearing something sparkly, she’s always tipsy, and, you know, she’s just there to tell you it’s okay. But she’s got a temper. You gotta know when to get away, go jump in the spring.” Arcie started out on TV with her sister Shasta, in a cooking show they called “Cookin’ Good.” The premise was simple enough: Two Austin ladies with a gift for gab, a love of cooking and a keen interest in conspiracy theories get together in the kitchen, sometimes with friends, and cook… Usually while discussing things like the “New World Order.” (There’s a reason why Austin is also known as the Conspiracy Capital of the World.)

Here’s a tiny taste of an episode about cornbread:

Thanks in part to it’s natural, conversational style and spontaneously hilarious weirdness, “Cookin’ Good” inspired the editors of The Austin Chronicle to put Arcie and Shasta on their cover for the “Best of Austin” issue in 2008, as the winners of “Best Public Access TV Show.”

“It took a few years to get going, but once it did there was a huge surge of love and recognition,” she told Austin.com. “It got weird… Then when the Chronicle said they wanted to write about us, we had no idea we were going to be on the cover. We found out when we walked in… They had a table laid out and were like, ‘There’s our cover girls!'”

But like all good things, “Cookin’ Good” eventually came to an end, and the Cola sisters pivoted to something completely different, but also entirely their own. They released a workout video, called “Toning for the Tribulations.” The theme, they explain, is that y’all gotta get in shape before The Man and his New World Order takes over the government, because you wanna be one of The Man’s sex slaves and not one of the workers, or just dead. And that’s just logical, right?

Arcie said that “Toning for the Tribulations” did not get the reception they were hoping for: a true injustice. It’s still wonderful, and you should check it out. Part one follows, and here’s a playlist of all the rest:

Moving on from that homegrown weirdness, Arcie looked to host her own show herself, with the help of a trusty sidekick. Not Shasta, but “Cameraman,” her producer and friend at Channel Austin who brought the hardware, lights and sound. Though not often on screen, Arcie and Shasta would frequently talk to “Cameraman” during episodes of “Cookin’ Good,” making him like an unofficial character in the show.

When her solo project materialized, Arcie returned as “The Oracola,” a live TV psychic taking phone calls from her audience. To watch it is to be hypnotized and rendered unable to look away. In all honesty, the only amalgam to “The Oracola” in pop culture is “Tim & Eric Nite Live,” and those guys are actually trying. Arcie? She hardly has to try. She’s just this fabulous:

“You learn a lot, being on live TV,” she said. “You cannot stop. You have to keep going, keep talking. There is nowhere to hide. So, I learned some skills, but it just got hard to keep going, to keep putting up with the little persnickety things that kept coming up.”

Arcie was feeling the pinch of the digital transition. “Everything’s headed to the Internet right now, and even though they stream [Channel Austin] and they’re trying to keep up… It’s hard to keep up, and it’s hard to tell people how to watch your show because everyone’s got to have digital cable and not everyone knows how to find it.”

She left Channel Austin for (ideally) greener pastures on YouTube, and last October Arcie launched her own video series: “Day Drinkin’,” featuring brief interviews with regular Austin folks. “I just put them out randomly, sometimes a lot and sometimes very little,” she said. “They’re just local folks. Some that I know, some that I don’t. I try to make ’em short, but you can get to know somebody in that amount of time. It’s also a way for me to learn filmmaking and editing, all that.”

We asked which video is Arcie’s favorite, but she refused to pick. “They’re all my babies,” she said. “Don’t ask mama to choose from her babies.” Fair enough: Here’s all of ’em.

A bonus: If you’d like to meet Arcie, she and the performance group “PooPoo Platter” also host a monthly drag show at Elysium. “Even though the drag culture is heavily steeped in the gay scene, it’s also undergoing a big transformation, constantly,” she said. “The younger performers are very experimental and they try things that may or may not fly in the more structured drag clubs and communities… Who am I to judge? I used to put my videos of cookin’ on the TV, so whatever you want to do girl, get it!”
——