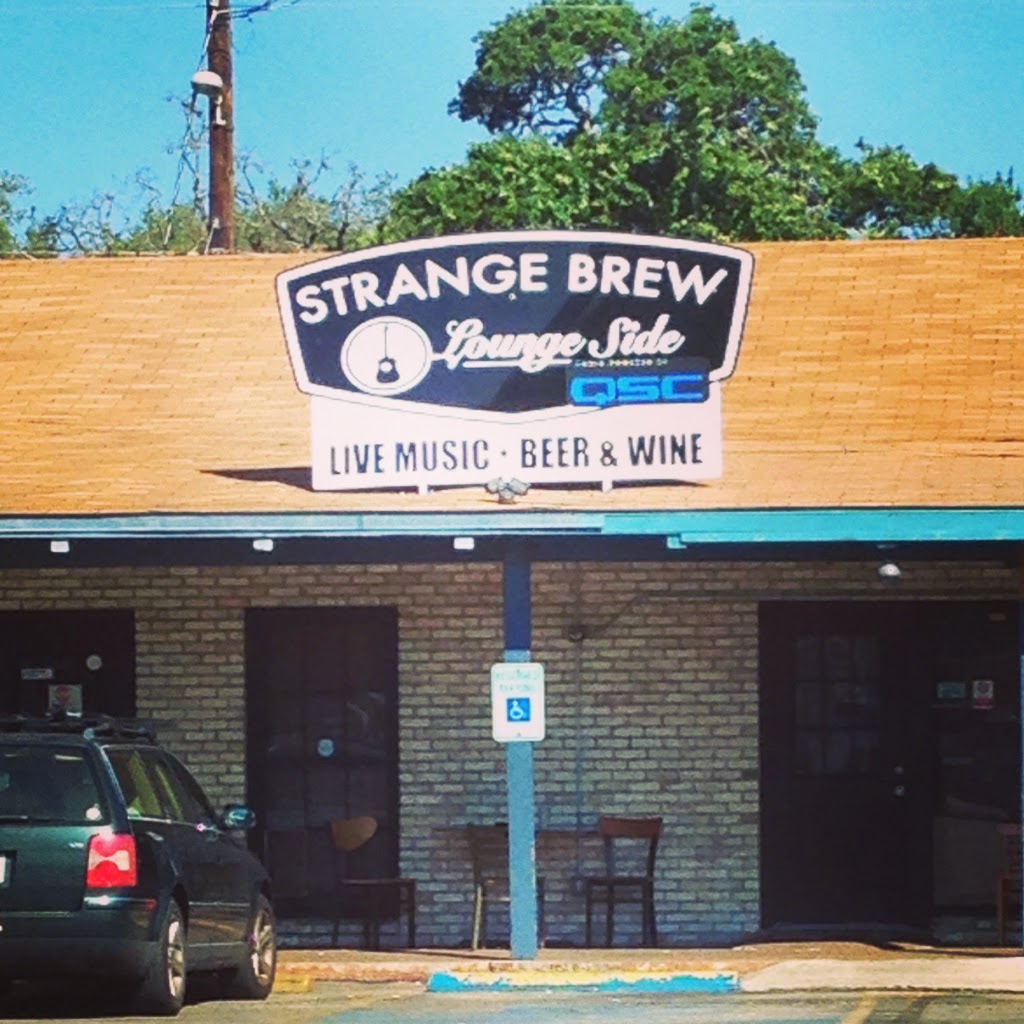 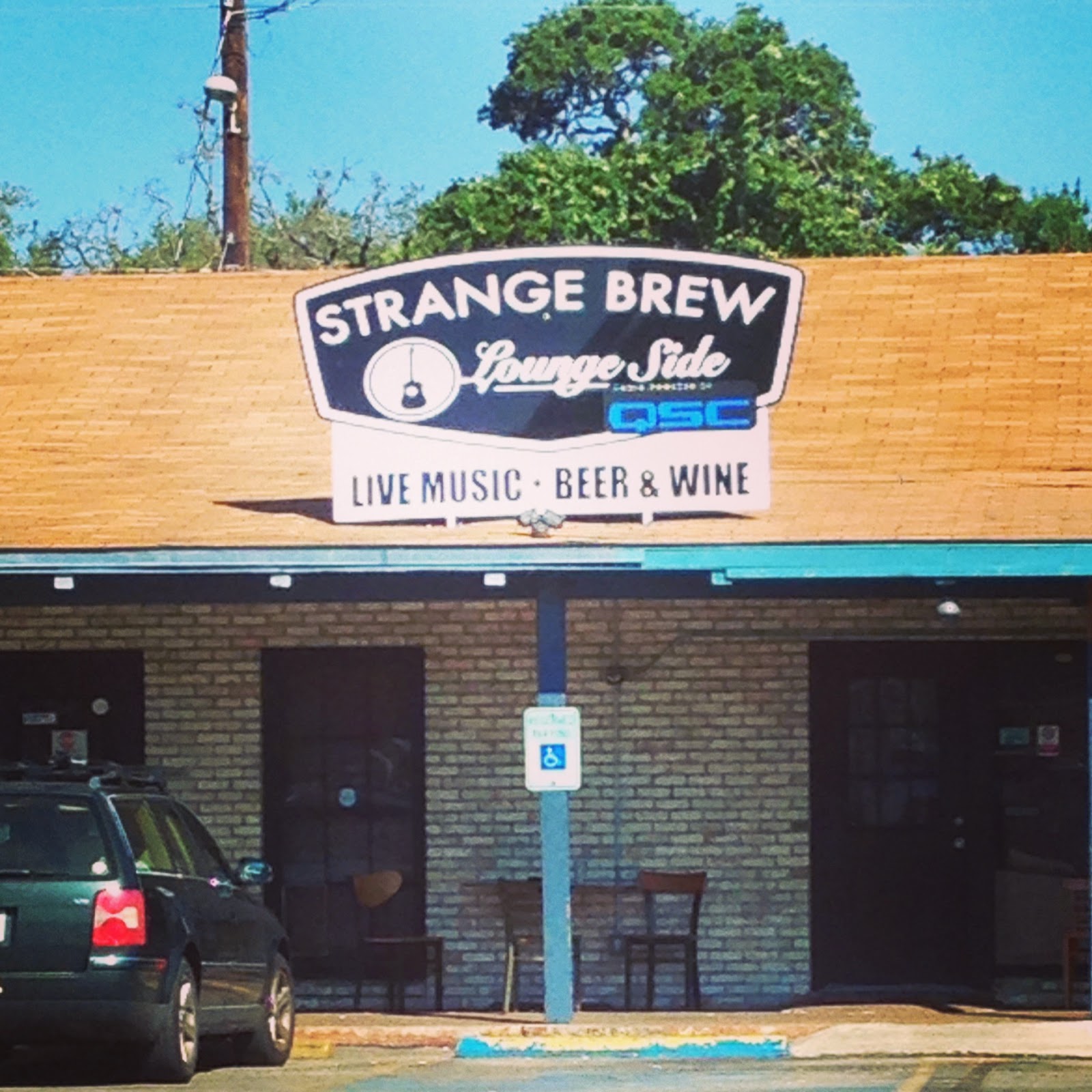 Before last week, I’d never been to Strange Brew Coffee (on Manchaca Road just north of Stassney), but I’d been stalking its events calendar for weeks. The list of bands and musicians playing at Strange Brew Lounge Side, right next door to the coffee shop, is eclectic, extensive and enticing, featuring everyone from Eliza Gilkyson (playing June 8!) to Joe Ely (two shows on June 28!!) to weekly gigs with Matt the Electrician (Thursdays) and David Hamburger (Mondays). Best of all, at least for my family, the calendar features free live music shows for kids Saturdays at 10 AM! 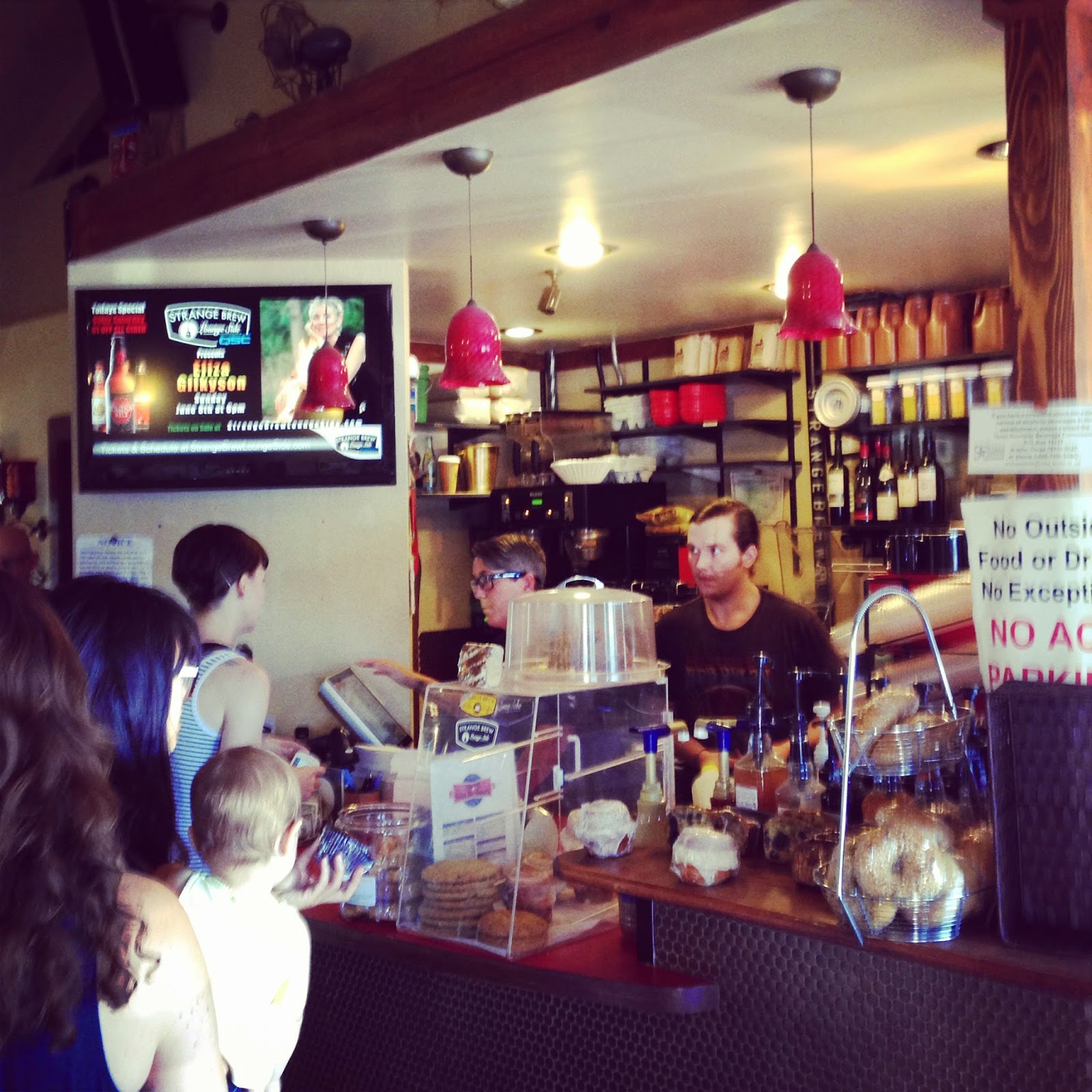 This past Saturday, I took Pearl to the show to meet with her play group friends. We arrived just before 10, and there was plenty of parking, but our friend who met us 20 minutes later had to circle the lot a few times to find a spot — once the show starts, the place fills up fast.

We bought iced tea and a peanut butter cookie in the coffee shop first, before heading over to the Lounge Side — the room, accessible from inside the coffee shop, where the bands play. When we opened the door to the Lounge Side, I was surprised to see a semi-dark room with windows covered by heavy curtains, filled with rows of chairs, a dance floor patterned with colored spotlights, and a sound board at the back — just like a regular bar or nightclub where bands play. Okay, I guess the Lounge Side is a regular venue for bands…but it seemed incongruous for a kiddie music show. Which I thought was pretty nifty. Why shouldn’t kids get to enjoy a nightclub — er, dayclub — just like adults? 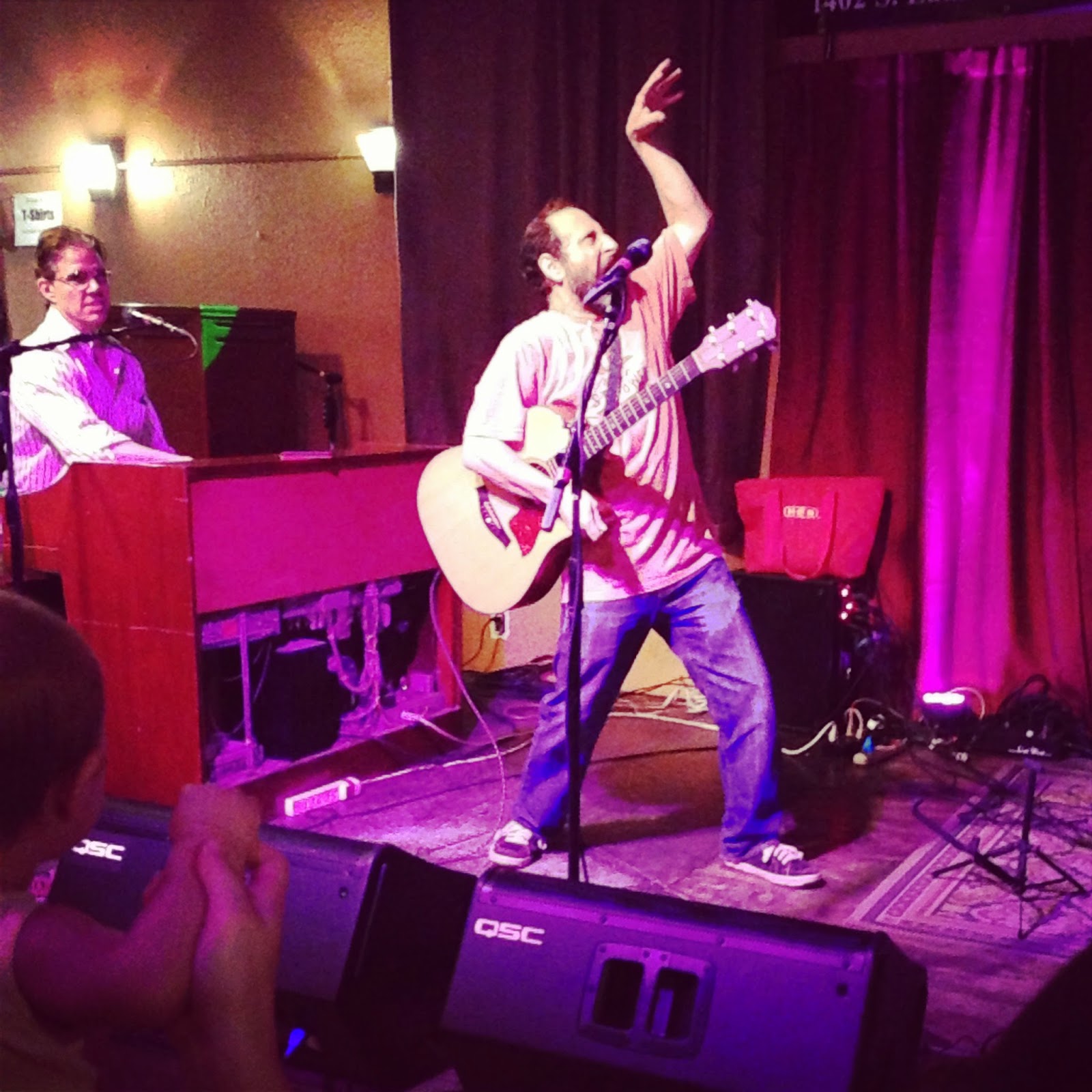 I wanna ride my giraffe all day!

The band playing was the Groundwork Music Orchestra, who started promptly at 10 and sang for the kids for over an hour about things like Rid[ing] My Giraffe (“I wanna ride my giraffe alllll daaay!”) and Bone Soup (“It’s not so bad!” “Yes, it is!”). The band was so fun — hilarious, engaging, with catchy songs everyone could sing along to immediately. They played lots of original songs, but also plenty of classic crowd favorites that all the kids knew by heart. They even asked for a volunteer from the audience to come up and sing on one song, and a very brave young lady with a beautiful, bell-clear voice went up to the stage and accompanied the lead singer for the entire song. 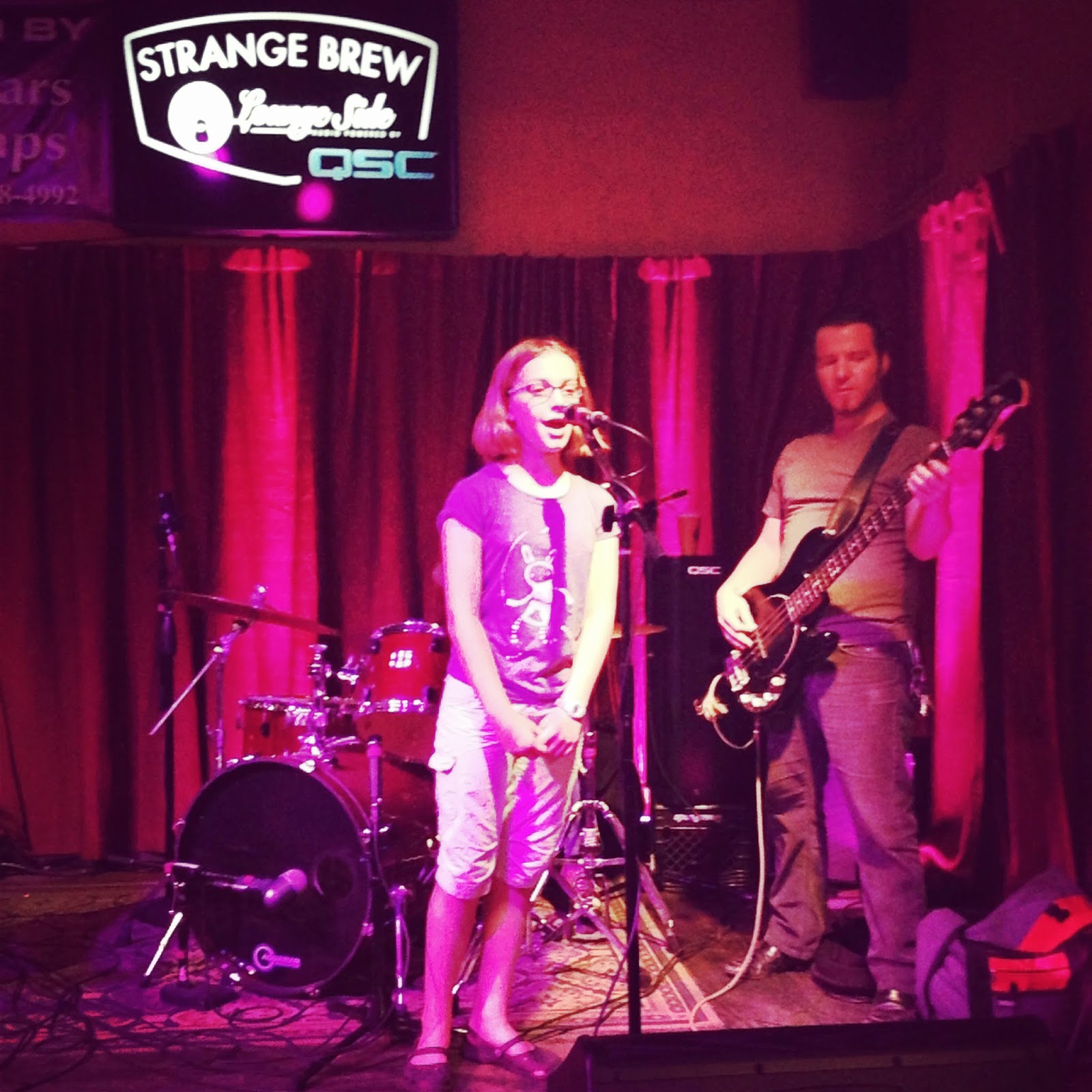 I’d never heard of the Groundwork Music Orchestra, but after checking them out online after the show, I learned they’re part of the Groundwork Music Project, which provides free and low-cost music lessons to young children with limited means. Pretty awesome. You can listen to some of their songs here, and even download individual songs or the whole kids’ album for FREE! You can also make a donation; in my opinion, it’s for an excellent cause, as music programs in public schools keep being cut back further and further along with other programs deemed “non-essential” (that’s another discussion for another time, but the work this group does seems so needed, and so cool!). 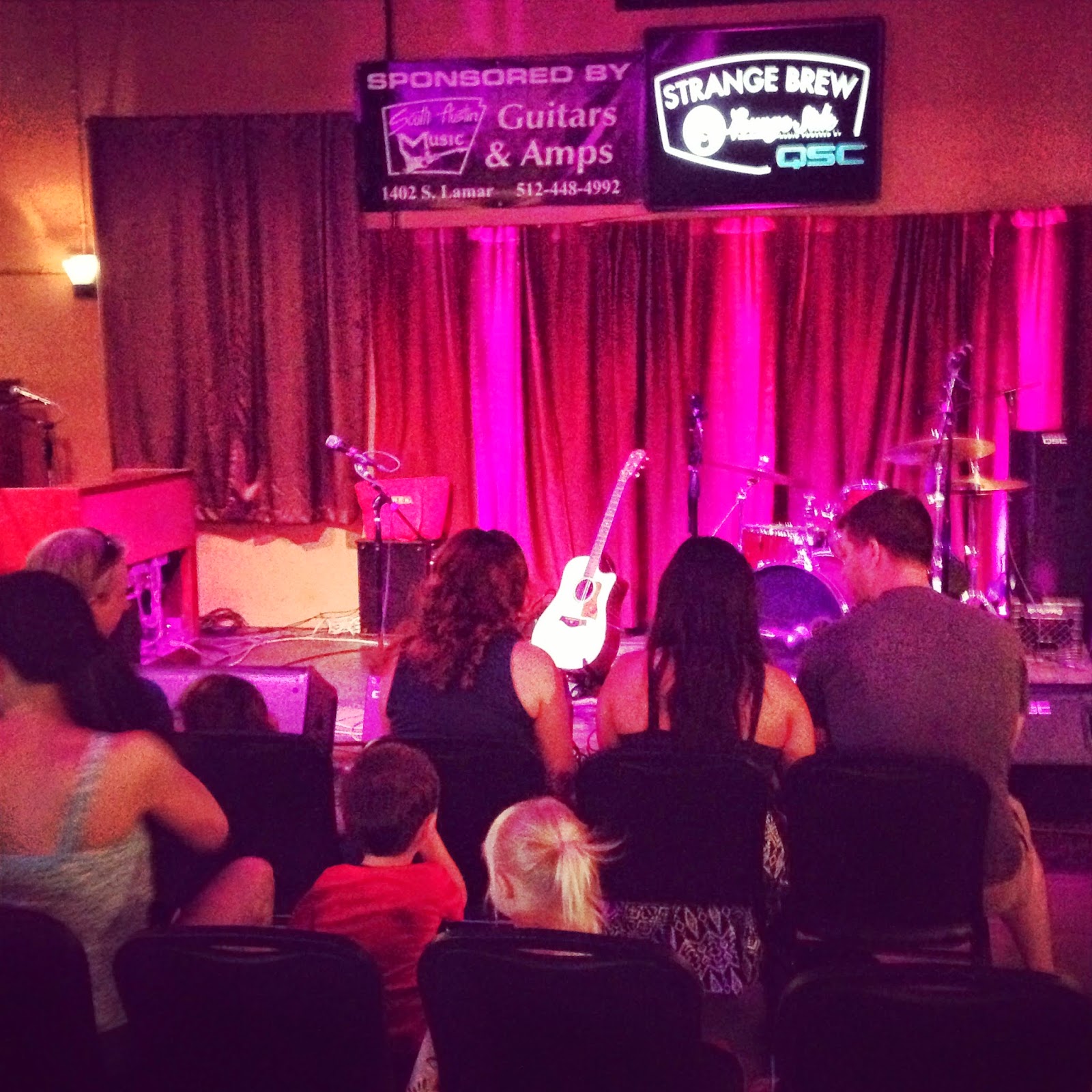 I very much recommend the Groundwork Music Orchestra, but don’t see them listed on the Strange Brew calendar in coming weeks.

The free Strange Brew Saturday morning kids’ shows through August feature other bands, such as the Que Pastas (June 14 and July 12) and Jungle Jill and the Jaybirds (June 21, July 19 and August 16). Be sure to check the schedule before you go. 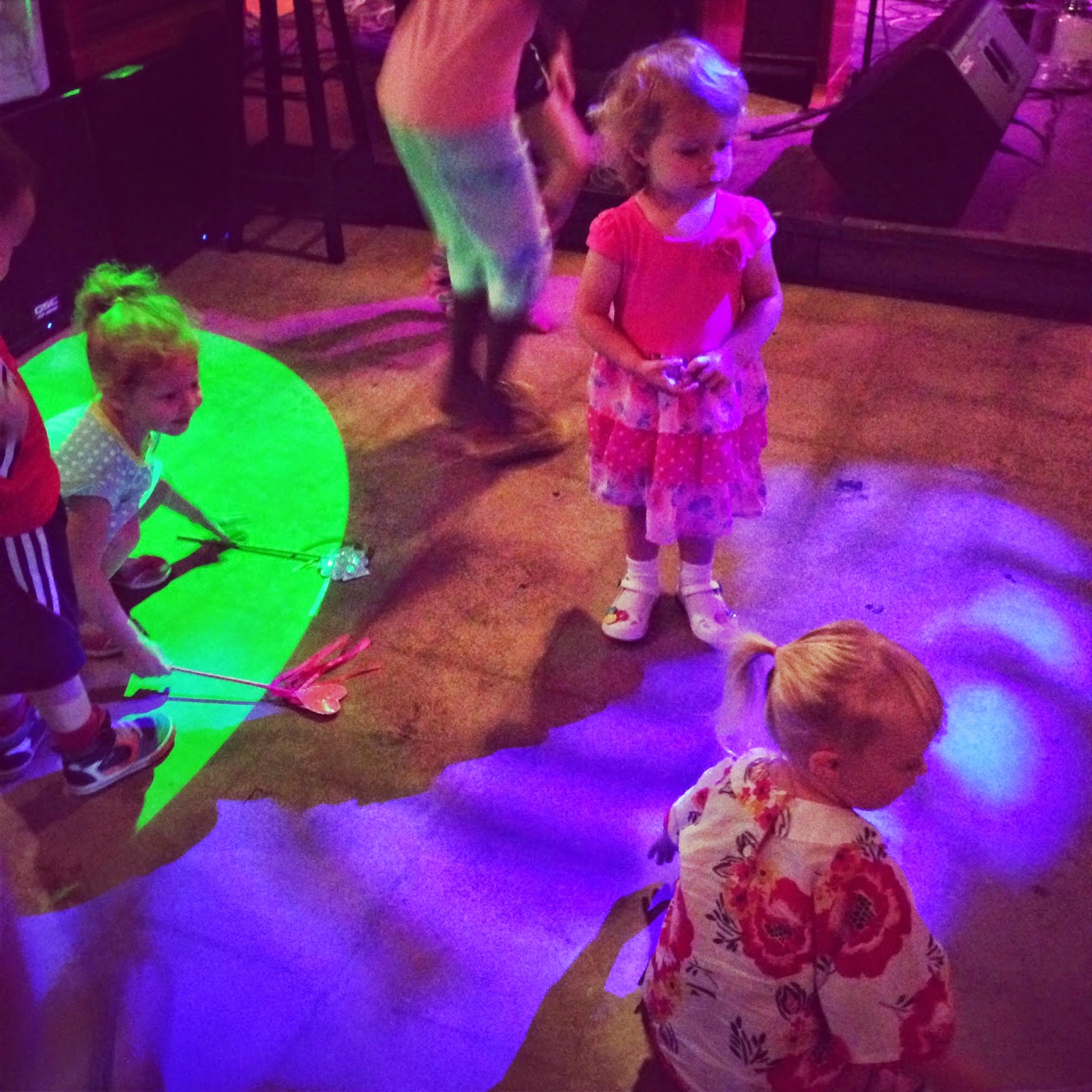 One thing that was great about Strange Brew Lounge Side was that it’s an enclosed room, so the kids can run free, dance, sit in the chairs, lie on the floor — whatever they want to do. I found it much less stressful than lots of places I’ve taken Pearl to before, since I didn’t have to be on such constant alert regarding where she was and whom she might be bothering. There was also a dance floor for the kids, complete with a colored-light show, which was just so cute and cool! I thought the food offerings were a bit on the expensive side (e.g., $3.50 for a bean-and-cheese taco), but since the show was free, paying a little extra for food didn’t seem like a big deal.

Oh, one other cool thing that may not matter to anyone besides me: I always like places that provide recycling options instead of making you toss everything into the trash, and Strange Brew has a good composting and recycling station!

Here’s the full summer kids’ show schedule at Strange Brew Lounge Side — all shows are free on Saturday mornings at 10 AM.