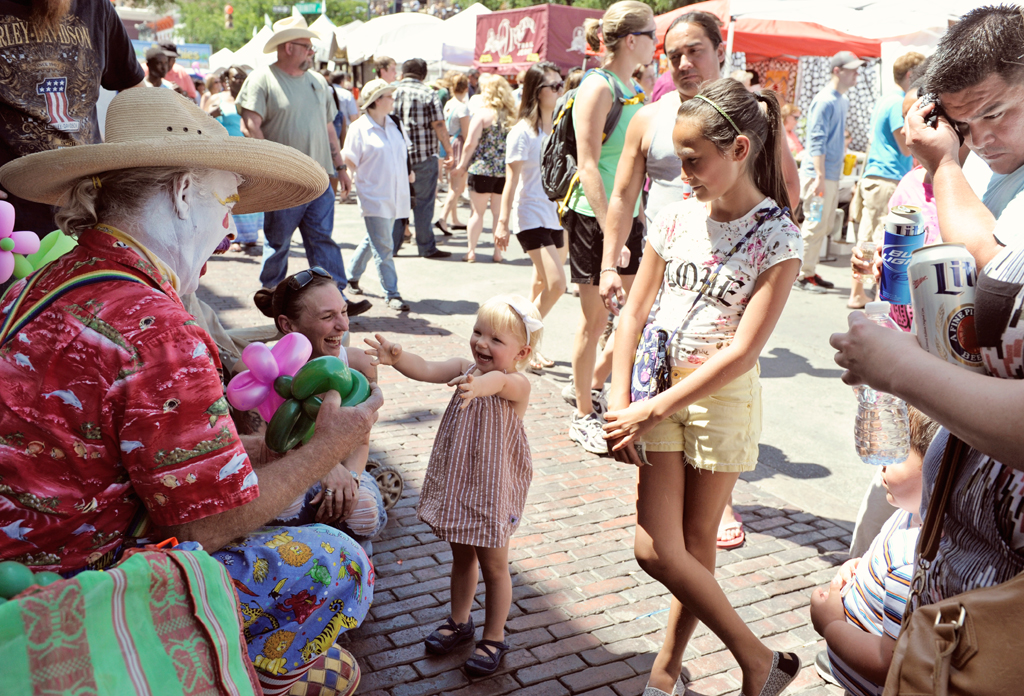 If you understand anything about Austin, you know that 6th Street is the place where pub crawling Austinites booze and schmooze their nights away, guzzling local brews and rocking out to sweet live tunage. In fact, most travel guides and “top things to do in Austin” lists rank partying down “Dirty Sixth” as a must-have experience for any tourist or resident. However, 6th Street is more than just a nightly watering hole for native wildlife. Lined by some of the oldest and most famous historic shops, venues, and restaurants in the city, the Sixth Street Historic District between Brazos Street and I-35 arguably represents the very heart of Austin—and this year’s fall Pecan Street Festival can prove it.

The Pecan Street Festival is a art-focused palooza that takes place every year on the first weekend in May and the last weekend in September, courtesy of the Old Pecan Street Association. Hundreds of artists and artisan vendors from all over the country gather to sell their work to the 200,000 festivalgoers that attend per weekend as musicians and street performers entertain the masses from event stages (located on Trinity, Neches, and Red River Streets), street corners, and open windows.

“The arts and crafts show the creative side of Austin,” said Shannon Sedwick, festival coordinator and president of the Old Pecan Street Association. “These aren’t items that can be bought at a mall, or in a grocery store. These are hand-crafted, one of a kind pieces of art, that bespeak the artist, and create a dialogue between the buyer and the seller.” This year’s festival will feature 200 local and national vendors, including 30 food artisans, and 45 renowned and up-and-coming musicians and bands. Many artisans, such as this fall’s featured artist, Warren Cullar, have been setting up shop at Pecan Street Festivals for decades. You’ll find art from all mediums at the festival: apparel and adornments, paintings and photography, pottery and sculptures, rock art, wood art, metalwork, and more. Event coordinators have also cooked up a hearty helping of kid- and family-friendly fun, including face painting, a petting zoo, interactive workshops, and kid-oriented street performers.

With such a wide variety of offerings, Sedwick is confident that the Pecan Street Festival can amuse just about anyone. In fact, that’s the beauty of holding it on historic Sixth.

“Sixth Street is basically the heart of the Austin entrepreneurial spirit,” she said. “All the mom and pop businesses that started up there, for over a century, prove that if you had the gumption and drive to start your own place, whatever race, creed, or color, you could do it in Austin on Sixth Street! People helped each other to survive, and everyone enjoyed each other: from the Hispanic meat markets to the Jewish jewelers, the Lebanese taverns to the African American doctors, to the German movie houses, to the Chinese restaurants. They loaned money when the banks wouldn’t and all the kids hung out on the street corners together in a true melting pot of cultures!” In the end, whether it’s the handcrafted creations, the mouthwatering scents of simmering funnel cakes and turkey legs, or charity-minded gusto that draws you to the Historic Sixth Street District on Sept 27-28, one thing is certain: the Pecan Street Festival is and always has been about the people.

“Like Austin itself, Pecan Street Festival attendees are diverse,” said Sedwick. “Some come to buy art, others come for the food or the music, but they all come to take part in a tradition that is 100 percent Austin and has been known for more than three decades as a great way to spend a weekend.”

For more information about this year’s Pecan Street Festival, visit the event website or watch this documentary short on the 2011 festival or watch the 2013 video below. Featured photo: Nicola Gell, courtesy of the Old Pecan Street Association.