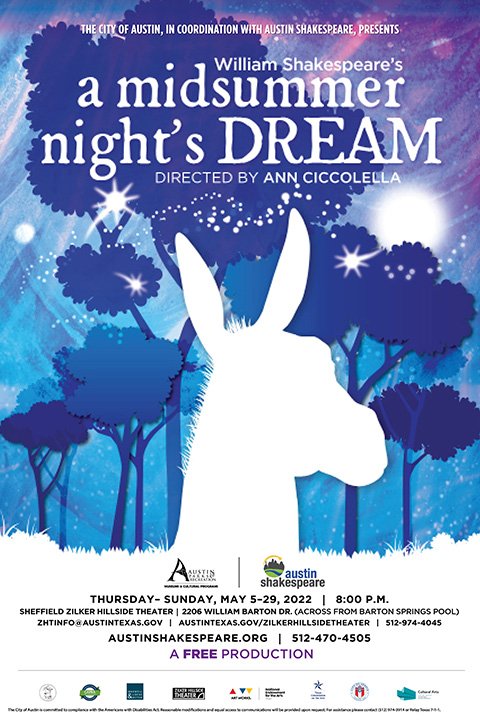 Our “Free Shakespeare in Zilker Park” returns to offer the famous romantic comedy A Midsummer Night’s Dream for four weekends May 4-May 29, 2022.

Made possible in collaboration with City of Austin’s Parks and Recreation Department, this colorful outdoor story of young lovers made crazy by fairy tinkering is a family favorite.

“We are thrilled to bring “Austintatious” creativity to what has been hailed as Shakespeare’s “perfect comedy” with some of the best professional Austin actors playing lovers, fairies and comics, featuring a pop music mix by L.B. Bartholomee.”
− Ann Ciccolella, Austin Shakespeare Artistic Director

In this, one of Shakespeare’s most beloved romantic comedies, we find the bewitched lovers Lysander and Demetrius (Dane Parker and Max Green) spending a fever-pitched night of love, desire, and confusion chasing (or being chased!) through the forest of magical creatures by their beloveds, Hermia and Helena (Eliza Renner and Helyn Rain Messenger).

While twisted up in their own tumultuous love affair, we are also greeted by the glorious Queen of the Fairies, Titania, (Kate Glasheen*) as she is “charmed” to fall in love with the magically transformed, donkey-headed Bottom (Gwendolyn Kelso*) by her own husband Oberon, the powerful and jealous King of the Fairies (Gabriel Diehl), aided by his mischievous henchman, Puck (Henry DelBello). Our winged fairies round out the Queen’s court Peaseblossom (Amani Alexander) and Cobweb (Danielle Kaigler).

The zanier comics of this piece are known as “the mechanicals” . . . their members being Quince, the workman/director for the bizarre play-within-the-play (Bennie Braswell); Snug the Lion’s part (River Ramos); Snout/Wall (Trace Turner); Flute/Thisby (Coltrane Conklin); and Starveling/Moonshine (Meg Hobgood). They are all joined by the hilarious Bottom as they strive to entertain the mortal king and queen of the land, the legendary hero, Theseus (Charles Gross) and his conquest-queen Hippolyta (Emily Green). Rounding out this cast of characters in the mortal court is Egeus, Demetrius’ forceful father (Milaka Falk) who creates the impetus for our young lovers to flee into the forest in the dead of night to find their fates to be forever intertwined in love and desire . . . plus a little fairy magic!

Shakespeare’s most popular play has lighting and scenery by our resident lighting designer, Patrick W. Anthony and colorful costumes designed by Aaron Kubacak.