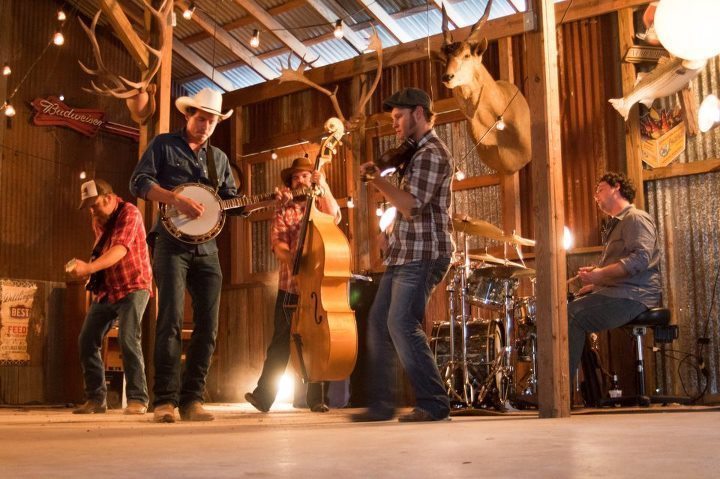 Times are tough for just about everyone these days, especially for those who live in what is often referred to as the “flyover states,” in the heart of the country. People have become tougher, their skins have grown thicker and they have become much harder to win over. That especially holds true when it comes to the music that rolls into the bars, music halls and honky tonks of their towns. The overwhelming success that TURNPIKE TROUBADOURS have had on the so-called Red Dirt circuit of those states says a lot about the quintet’s authenticity and fire, particularly because their music is not exactly what that scene in known for producing.

“When we first started playing, people couldn’t have cared less that we were there,” recalls Troubadours’ frontman Evan Felker. “They were there to drink beer and raise hell and they didn’t really care what music was playing while they did it. But as we went on and as we got better, they started to listen. I mean, they were still drinkin’ plenty of beer, but before too long, they were actually coming to hear us and asking us to play our songs, and not just covers of traditional favorites and all the other stuff we’d been doing.”

Not only did the crowds get more attentive, they kept getting bigger. As time went on, and the Troubadours broadened their touring circle, they moved on from tiny clubs in the more obscure corners of the Sooner state and started hitting – and selling out – prestigious venues like Cain’s Ballroom in Tulsa, the Firehouse Saloon in Houston and Antone’s in Austin.

Over the course of the past five years, Felker, bassist RC Edwards, fiddle player Kyle Nix, guitarist Ryan Engleman and drummer Gabe Pearson, have honed the rowdy, quick-witted sound that’s brought folks of all stripes together in front of those stages. And on Goodbye Normal Street, the Troubadours’ third full-length album, the band takes that blend of nice and easy and nice and rough and distills it into a 43-minute ride that takes in the scenery of America’s Heartland and the inner workings of a group of 20-somethings on a quest for something better.

“This time around, we tried to balance things out,” says bassist Edwards, who shelved a steady gig as a pharmacist in late 2011 to concentrate on the band. “We wanted to combine the idea of getting something perfect, the way you can only do in a proper studio, with the energy of playing in front of a thousand people jumping around and screaming.”

They attack that goal with gusto on Goodbye Normal Street, putting the pedal to the metal on “Before the Devil Knows We’re Dead” (a breakneck romp about regular folks who lived hard and died in a blaze of glory) and dialing back to a sensual closing-time waltz on “Call a Spade a Spade” (a cheater’s lament on which Felker duets with Jamie Wilson of the Trishas).

Felker, who writes the majority of the lyrics – with an assist from Edwards, who penned the semi-autobiographical “Morgan Street,” about the band’s hardscrabble early days – has a knack for capturing slices of life in vivid detail. He can hit hard emotionally with a song like “Blue Star” (a bittersweet tale of a veteran returning from war) or tweak the listener with something like “Gin, Smoke and Lies” (on which he contrasts his own romantic plight with that of a rooster who manages to satisfy 20 partners, and not just one).

“All the songs are about people we know,” he says. “And yeah, some of them are probably about me to some degree – the guy who ticks off the wrong girl from Arkansas, and the guy who doesn’t always like what he sees himself becoming. Mostly though, I think they’re just honest.”

The band – which took its name from the Indian Nation Turnpike that connected so many of the smaller towns where they cut their teeth – gradually evolved from offering acoustic explorations of tunes by Townes Van Zandt and Jerry Jeff Walker to kicking out three or four sets a night of full-throttle roadhouse country – tinged with the punk rock attitude that was in the air during the members’ teen years.

“We all pretty much grew up with hardcore country music around us,” says Felker. “I mean, sure, there was rock stuff in there, but the real old-school stuff, plus exposure to folks like Jason Boland and Cross Canadian Ragweed, really affected what we were playing. We’re really a product of both our influences and our environment. It wasn’t something that we sat in a room and dreamed up in one day.”

That’s clear. The raw-boned energy of their 2007 debut, Bossier City, cut on a shoestring budget and aimed squarely at getting boots on the dance floor earned raves from many corners, including No Depression, which dubbed it “a testament to the small towns in which they were raised … with stories of longing, humor, tragedy and general life in rural America.” The quintet broadened its horizons on its sophomore outing, Diamonds and Gasoline, which spawned the Americana favorite “Every Girl” and brought them to the attention of folks throughout the country, and overseas.

And with Goodbye Normal Street – the name a reference to another longtime band residence as well as a state of mind that they left behind long ago – they set their sights on conquering even more expansive territories. With songs like the blue-collar anthem “Southeastern Son” and the universally understandable breakup plaint “Wrecked,” they look pretty likely to conquer them.

“This music, at its best, can put into words what we have been thinking for our entire lives,” says Felker, “and even at its worst, it gets people drinking beer and makes people happy. Either of those is fine with me.”