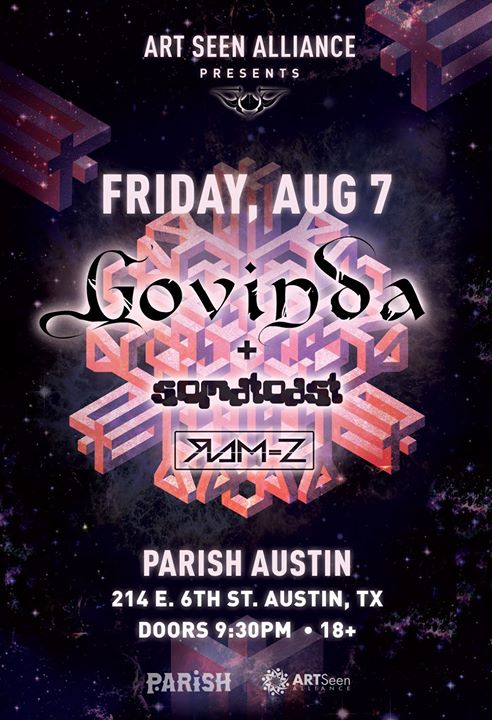 Govinda is the alter-ego of Austin based producer/composer Shane Madden. In addition to performing with Thievery Corporation, Tipper, Bassnectar, Shpongle, STS9 and many more he has played at numerous festivals throughout North America including Coachella, Lightning in a Bottle, Sea of Dreams, SXSW and more. Govinda’s music has been on TV including stations like WB, MTV and Bravo as well as many independent films. The Govinda live show immerses the audience with a textured atmosphere of exotic, dubby vibrations interwoven with cosmic visual projections, world class dancers and mesmerizing vocals- all to the magic of his live electronics and violin.

Mark Rubin AKA Somatoast has an insatiable hunger for the unheard. Through downtempo rhythms, spacious melodies, and alien textures, Mark invokes a mysterious ritual in a modern, strange context.

Mark came to Austin to study film production and digital media. He was immediately sucked into psychedelic music and arts culture. There, Mark began creating his own dub, electronica, and glitch-hop concoctions as he became inspired by the eclectic surroundings that Austin has to offer. Mark now has official releases on Shanti Planti, Gravitas Recordings, and Merkaba Music.

Ram-Z has been a Texas Icon for the last 16 years and has been growing within the global community ever since he jumped into the studio to create his souls expression 7 years ago.

Through his exploration and love of music Ram-Z’s finesse through a range of emotions and genre jumps can bring a tear to your eye or leave you drenched in sweat while you celebrate your journey on life’s dancefloor! His genre’s of music can flow from Glitch, Midtempo, Breakbeats, 2Step, Trap, Bass Music, Dubstep and more! Some have said, this is a dj’s dj and he truly understands the journey!