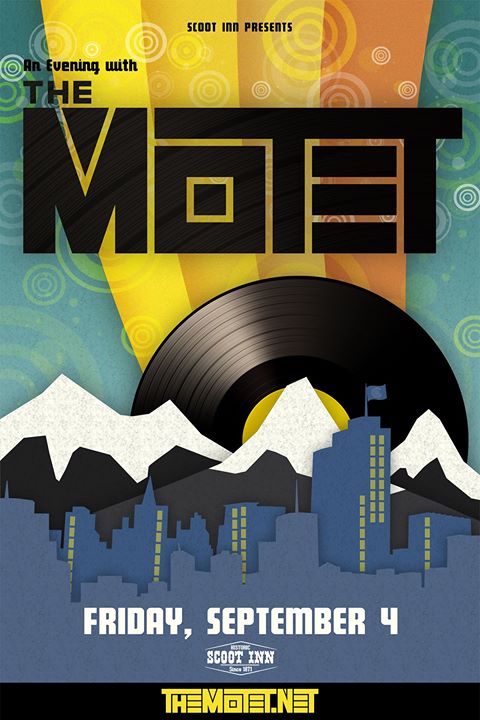 An Evening with The Motet

Hailing from Colorado, the Motet is a world-class improvisational funk band that has dedicated more than a decade to the healing powers of funky dance music. Although the early years of the band saw a constantly revolving cast of musicians, the most recent incarnation has been touring the country for the last several years developing a new and unique style with roots in funk, afrobeat, disco, electronic music, and soul. This new Motet has quickly gained a reputation for throwing infectious dance parties everywhere they go, creating a deep rapport between band and audience.

With the release of their 7th album, the Motet has once again showcased their commitment to pushing the sonic envelope while remaining dedicated to the musical traditions that have defined their sound. The band’s decision to call the album “The Motet” is a reflection that the group has finally become what it has striven to be throughout its existence. The album is a truly collaborative effort, with each member contributing equally to the writing process. In addition, the band spent hundreds of hours in the studio meticulously crafting vintage tones that hearken back to the glory days of funk music. The result is an organic collection of strong interlocking parts and melodies that sounds like nothing else on this planet.

All bands have their influences, and the Motet is no different. The band has a long-standing tradition of putting on a musical costume each Halloween, playing consistently sold-out shows along the front range of Colorado while performing the music of groups like Earth Wind and Fire, Parliament Funkadelic, Tower of Power, and Jamiroquai. The careful study of these bands has had an undeniable effect on the creative direction of the Motet. As bandleader and drummer Dave Watts told the Boulder Weekly, “We realized how effective a great song is on a crowd. Instead of just the energetics we’re used to bringing with improvising, soloing, and extended arrangements, we really decided to focus on tunes, because we understand how powerful a great song is.”

A great song needs a great band to play it, and the Motet proves to be more than adequate in that regard. In addition to Watts, Joey Porter (keys), Garrett Sayers (bass) and Ryan Jalbert (guitar) form a core rhythm section that has been playing together for nearly a decade. This time together has led to their characteristic deep rhythmic pocket, and has created the musical bonds that allow them to take their collective improvisation to heights bordering on precognition. The Motet horns consist of Matt Pitts (sax) and Gabriel Mervine (trumpet). Although deeply rooted in jazz, their time with the Motet has made them into one of the funkiest horn sections on the scene. Front man Jans Ingber rounds out the lineup with his soulful singing, welcoming stage presence, and “Soul Train” dance moves which inspire concert goers to boogie like no one is watching.

These seven musicians form what is undoubtedly the strongest, most cohesive incarnation of the Motet to date. Whether you’ve loved the Motet for years or you’re just tuning in, listen up. You haven’t heard the Motet like this, and you won’t be disappointed.