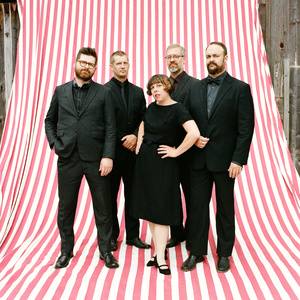 “In some ways, this album was four years in the making,” says Colin Meloy, frontman and primary songwriter of THE DECEMBERISTS. “We were on hiatus, so we had all the time we could want, no schedule or tour, no expectations.”

With the ability to work at their own pace, the resulting record, What a Terrible World, What a Beautiful World, is the band’s most varied and dynamic work, both musically and emotionally. Since their earliest recordings more than a decade ago, the Decemberists have always been known for their sense of scope and daring – from “The Tain,” an eighteen-and-a-half minute 2004 single based on an Irish myth to their last two ambitious, thematic albums, The Hazards of Love and The King is Dead. This time, though, Meloy explains that they took a different approach: “Let’s make sure the songs are good, and eventually the record will present itself.”

The Decemberists – Meloy, Chris Funk (guitars), Jenny Conlee (keyboards), Nate Query (bass), and John Moen (drums) – had announced that they would be taking a break when their touring cycle finished following the release of 2011’s The King is Dead. Meloy wanted to spend time with his family and work on the children’s book series that became the acclaimed, best-selling Wildwood trilogy. To be sure, they had reached a new peak in their career: King entered the Billboard album charts at Number One, and the track “Down by the Water” was nominated for a Grammy in the “Best Rock Song” category.

Without a deadline, the Decemberists were able to explore every song to completion. “Usually you have to let some songs slide because of time constraints,” Meloy says, “but nothing was relegated to the b-side pile, everything was given a fair shake. Which is a blessing and a curse – we ended up with 18 songs, and each had champions and detractors. There were a multitude of albums you could potentially make – somber, over-the-top pop, folk – and I think every band member would have created a different record.”

Ultimately, What a Terrible World, What a Beautiful World found its final form, a distillation of the best things about this remarkable band. A new way of working led to a renewed excitement about the next chapter for the Decemberists. “I’ve never lived with a record for so long,” says Colin Meloy, “documenting my shifts and changes as a songwriter, with a real sense of time passing. And there’s something very freeing about working on music with absolutely no agenda, and just letting the songs become themselves.”