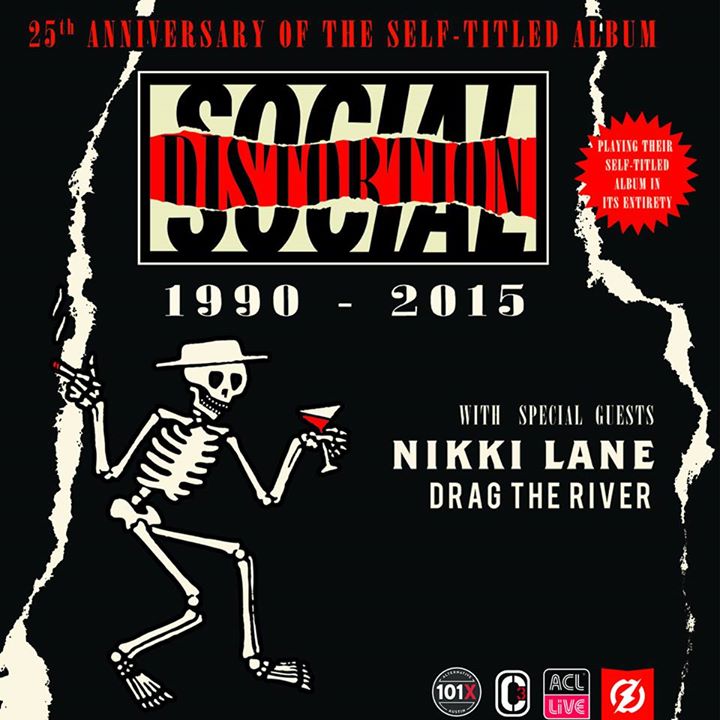 Presented by 101X and brought to you by ACL Live, C3 Concerts and Transmission Events. With special guests Drag the River and Nikki Lane!

In celebration of the 25th anniversary of their “self-titled” album, SOCIAL DISTORTION have announced a 2015 North American tour. Beginning in Tempe, AZ on July 28, Social Distortion will embark on a six-week tour where they will perform their “self-titled” album in its entirety. In addition to performing Social Distortion front to back, the band will also play classic tracks and rarities from their extensive back catalogue. Joining them on the road will be Nikki Lane and Drag The River. Tickets go on-sale Friday, April 24 at 10am local time.

Released in March 1990, Social Distortion was the iconic band’s 3rd album and the first for Epic Records. It became their best-selling album worldwide, and the first one to enter the Billboard 200 album chart. Singles “Story Of My Life,” “Ball and Chain,” “Ring of Fire” and “Let It Be Me” all reached Top 25 Billboard single chart positions. The album is set to be re-released on limited edition color vinyl for Record Store Day.

In regard to the forthcoming tour supporting the 25th Anniversary of the seminal album, frontman Mike Ness states: “We are very excited about this tour. It’s not often we get to celebrate anniversaries of records, or play them in their entirety, but this record was a milestone for us and after rehearsing it we realized it was a hell of a set… High energy and good flow. It was a great feeling to play songs that I hadn’t played in twenty years, or more. It’s inspirational to “revisit” this album; especially during the writing of a new record. All I can say is ‘it’s gonna be a kick ass show!!!!’”

In the 25 years since the release of Social Distortion, the band have gone on to release four more critically acclaimed and fan favorite studio albums; “Somewhere Between Heaven and Hell” (1992), “White Light, White Heat, White Trash” (1996), “Sex, Love and Rock ‘n’ Roll” (2004) and “Hard Times and Nursery Rhymes” (2011). Social Distortion’s latest release, Hard Times and Nursery Rhymes, was the first album with their current label Epitaph Records and the band’s highest charting album in their career. Produced for the first time by Ness himself, the album debuted at #4 in the US Billboard Chart.