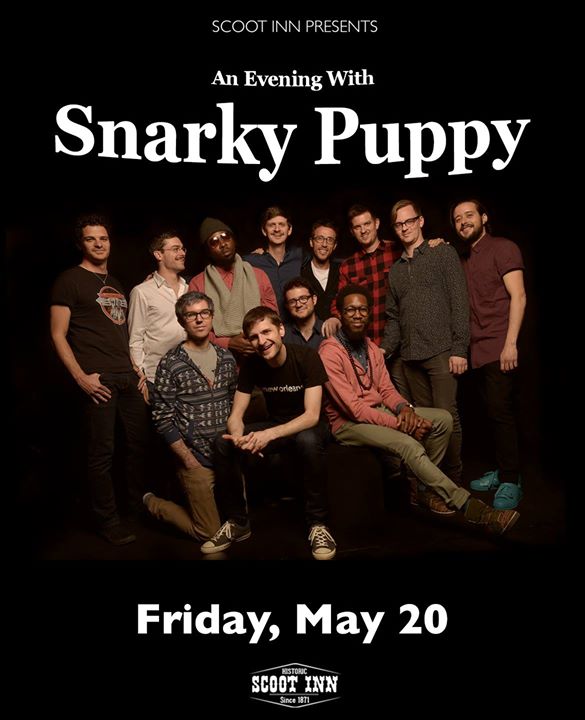 An Evening with Snarky Puppy

With every new project—hell, with every show they play—Snarky Puppy hopes to do something they’ve never done before. With their new album, Family Dinner, Volume 2, the eclectic, unclassifiable jazz/funk/global collective has set their sights higher than ever.

“We had a wish list of artists we wanted to collaborate with from a wide array of styles,” says bassist/composer/producer Michael League. “We tried to come up with different demographics, nationalities, even age groups. Beyond that, we wanted to write arrangements that not only the band would really shine on, but would also truly capture the essence of each artist.”

The result is a free-wheeling, wide-ranging collection, recorded live in New Orleans, featuring an astonishing list of musicians from around the world, including Susana Baca, Charlie Hunter, Salif Keita, Laura Mvula, David Crosby, and an all-star group of Big Easy players including Ivan Neville and Terence Blanchard. Various combinations of the three-dozen members of Snarky Puppy act as the house band for an unprecedented journey through different sounds, genres, and cultures.

The album is the second installment of a series that started with 2014’s Grammy-winning Family Dinner – Volume One, and is the follow-up to Snarky Puppy’s most recent release, Sylva, a collaboration with Holland’s Metropole Orkest that garnered a 2016 Grammy nomination and entered at #1 on both Billboard’s Jazz and Heatseekers Charts. The record (which comes packaged with a companion DVD that features footage of the recording process and artist interviews) is the first release in a joint partnership between Universal Music Classics and GroundUP Records, the label owned and operated by League; a portion of the proceeds will be donated to the New Orleans music education and mentorship organization Roots of Music.

Formed in 2004 at the acclaimed music school of the University of North Texas, Snarky Puppy exists as both an original music ensemble and a production team/session band, with individual sideman credits as diverse as Kirk Franklin, Snoop Dogg, Marcus Miller, and St. Vincent. Voted “Best Jazz Group” in Downbeat’s 2015 Reader’s Poll, as well as “Best New Artist” and “Best Electric/Jazz-Rock/Contemporary Group/Artist” in Jazz Times’ 2014 Reader’s Poll, they have earned accolades everywhere from the BBC to the Los Angeles Times, and All Music recently called the group “one of modern music’s bright lights.”

The Family Dinner concept grew out of the band’s weekly late-night sessions at New York’s Rockwood Music Hall, where they invited different guests for each show. Settling on eight of their favorite collaborators, they gathered in Roanoke, Virginia for the making of Volume One, which was honored with a Grammy in the Best R&B Performance category.

“I love that album, but it was kind of heavy on female R&B,” says League. “The main difference this time was that we invited guest instrumentalists and paired them with singers. We put the Swedish trio Väsen with Becca Stevens, an Appalachian singer-songwriter, and as soon as they sat down, it felt like they were had been playing together for years—and that happened with each combination of artists.”

Setting up shop in New Orleans’ Esplanade Studios, Snarky Puppy rehearsed for three days on their own, then for another two days with the guest artists, and brought in an audience for three days of recording. The studio building became one big, all-day hang-out: the tone was set when guitarist Charlie Hunter went into a storage room to try out some amps, only to find everyone piling into the closet with him, yelling encouragement.

“The most important thing for something like this is the attitude, and all the musicians were amazing,” says League. “People would be downstairs jamming and talking and sticking around to be with each other. It was all egoless, just a joy.”

Though participants came from South America, Africa, and Europe, perhaps the most surprising Dinner guest was Rock and Roll Hall-of-Famer David Crosby. “Someone turned him on to the group and he was tweeting about us every day,” says League. “My family are huge CSNY fans, so I sent him a PM on Twitter and he replied within an hour. He said he was in the middle of a writing binge, so I said we should do one of the new songs. The first one he sent me was ‘Somebody Home,’ and I said, ‘That’s it!’ It’s the only ballad on the album, and it’s stark. Beautiful.”

Of course, the incomparable setting also had an impact on the music of Family Dinner, Volume 2—especially since the sessions came during the days leading up to Mardi Gras. “New Orleans is its own planet, and it was really deep to have all of the artists there,” says League. “So much music has come out of the mixture of cultures in the city, and we had a microcosm of that in the studio. It just felt like the right place to be.”

The one artist who could not join for the sessions was master Afro-pop singer Salif Keita, who fell ill and was unable to travel. League made the trip to Mali and recorded Keita’s part on “Soro (Afriki)” in his home studio—truly an unforgettable experience. Both the original plan and the adjustment are a tribute to Snarky Puppy’s soaring ambition; “We try to turn obstacles into opportunities,” says League.

With Family Dinner – Volume Two complete, Snarky Puppy is back on the road, continuing their perpetual touring schedule, and working on their next recording, which will be their first studio album in seven years (“To me, that’s weird—recording in front of people is what we do,” says League). But the exposure to so many genres and the creation of such a variety of combinations will stay with these musicians forever.

“The homework we did on these styles feeds into the general pot of knowledge and experience we pull from every night,” says League. “We talk to the artists about their music, their rhythms—that’s who we are as people. We want to learn. To us, it’s not about being rich or recognized, but about surrounding ourselves with people who can help us grow. That’s what keeps you humble and hungry.”

And numbering the volumes of the Family Dinner series is the giveaway that Snarky Puppy plans to continue doing these projects for a long time. “Different places, different artists- there are so many potential variations that you get a unique personality every time,” says League. “If you get the right blend of people in the room, it will keep working. We’ll do it as long as we can.”