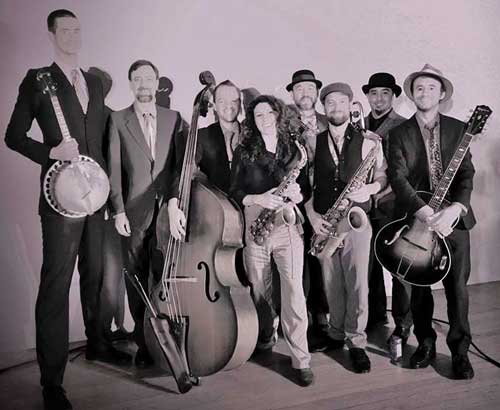 The Austin Traditional Jazz Society will feature the Rock Step Relevators on Sunday, October 20 from 1 to 3:45 pm at Cap City Comedy Club.  Rock Step began life in 2012 as the Thrift Set Orchestra, and quickly became a favorite of Austin jazz fans and swing dancers.  The band’s founder, reed player Jonathan Doyle, left Austin for Washington State, and maintains the Thrift Set name for national appearances.  The core of the band has remained in Austin and plays under the local name of Rock Step Relevators.

The Relevators are patterned after the small big bands of the Twenties and Thirties.  These ensembles rarely exceeded ten or eleven players, and in the Twenties the reed players often switched between sax and clarinet.  The Relevators typically perform with two reeds (three when cornetist David Jellema plays clarinet), cornet, trombone, banjo, guitar, string bass and drums.  They are a fun group that plays danceable hot jazz.

The Austin Traditional Jazz Society is a 501(c)(3) non-profit organization.