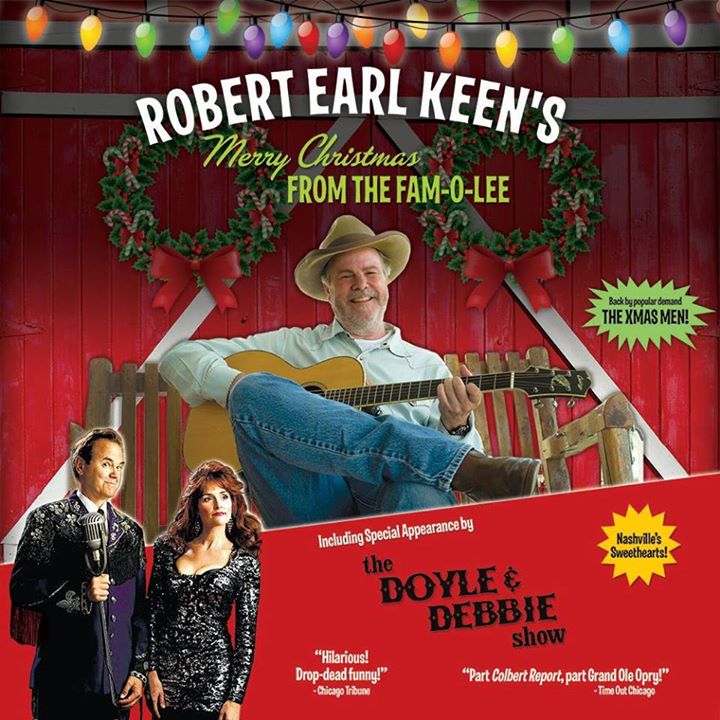 “The road goes on forever …”

It’s not always easy to sum up a career — let alone a life’s ambition — so succinctly, but those five words from ROBERT EARL KEEN’s calling-card anthem just about do it. You can complete the lyric with the next five words — the ones routinely shouted back at Keen by thousands of fans a night (“and the party never ends!”) — just to punctuate the point with a flourish, but it’s the part about the journey that gets right to the heart of what makes Keen tick. Some people take up a life of playing music with the goal of someday reaching a destination of fame and fortune; but from the get-go, Keen just wanted to write and sing his own songs, and to keep writing and singing them for as long as possible.

“I always thought that I wanted to play music, and I always knew that you had to get some recognition in order to continue to play music,” Keen says. “But I never thought of it in terms of getting to be a big star. I thought of it in terms of having a really, really good career and writing some good songs, and getting onstage and having a really good time.”

Now three-decades on from the release of his debut album — with well over a dozen other records to his name, thousands of shows under his belt and still no end in sight to the road ahead — Keen remains as committed to and inspired by his muse as ever. And as for accruing recognition, well, he’s done alright on that front, too; from his humble beginnings on the Texas folk scene, he’s blazed a peer, critic, and fan-lauded trail that’s earned him living-legend (not to mention pioneer) status in the Americana music world. And though the Houston native has never worn his Texas heart on his sleeve, he’s long been regarded as one of the Lone Star State’s finest (not to mention top-drawing) true singer-songwriters. He was still a relative unknown in 1989 when his second studio album, West Textures, was released — especially on the triple bill he shared at the time touring with legends Townes Van Zandt and Guy Clark — but once fellow Texas icon Joe Ely recorded both “The Road Goes on Forever” and “Whenever Kindness Fails” on his 1993 album, Love and Danger, the secret was out on Keen’s credentials as a songwriter’s songwriter. By the end of the decade, Keen was a veritable household name in Texas, headlining a millennial New Year’s Eve celebration in Austin that drew an estimated 200,000 people. A dozen years later, he was inducted into the Texas Heritage Songwriters Hall of Fame along with the late, great Van Zandt and his old college buddy, Lyle Lovett.

The middle child of a geologist father and an attorney mother, Keen was weaned on classic rock (in particular, the psychedelic blues trio Cream) and his older brother’s Willie Nelson records — but it was his younger sister’s downtown Houston celebrity status as a “world-champion foosball player” that exposed him to the area’s acoustic folk scene. By the time he started working on his English degree at Texas A&M, he was teaching himself guitar and setting his poetic musings to song. That in turn led to a college fling with a bluegrass ensemble (featuring his childhood friend Bryan Duckworth, who would continue to play fiddle with Keen well into the ‘90s) and front-porch picking parties with fellow Aggie Lovett at Keen’s rental house — salad days captured in spirit on the Keen/Lovett co-write, “The Front Porch Song,” which both artists would eventually record on their respective debut albums.

Robert Earl Keen will make a stop at ACL Live with a very special holiday show. So gather your own family together and have a Merry Christmas from Robert Earl Keen’s Fam-O-Lee!