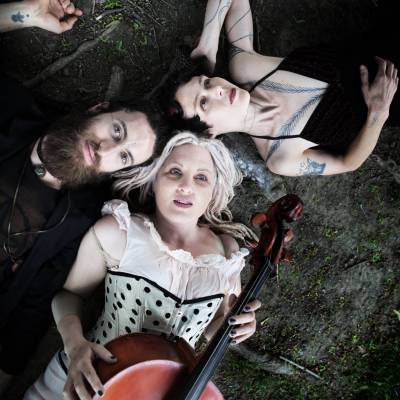 Rasputina works as an anomaly in popular music. By ignoring trends and maintaining artistic integrity coupled with musical enthusiasm, the group has thrived as time has passed. They expose passionate fans to historical tales, and inspire young string players to seek alternatives to the classical world.

Born and raised in Kansas, Melora Creager –Rasputina directress for the past 20 years – comes from a musical family and received classical training. At 18 she moved to New York City to attend Parsons School of Design. While majoring in photography, she began playing her cello in rock bands and became involved with drag performers. She formed “The Fingerlakes Trio,” a falsely geeky classical group that performed covers of disco hits, before joining NYC’s Ultra Vivid Scene. Melora was Nirvana’s cellist for their final tour in Europe.

The concept for the group came to her fully formed; the idea was written as a manifesto. Her intention was to create an electric cello choir – no boys or guitars allowed. Through want ads she recruited like-minded cellists. Rasputina evolved, employing elaborate costuming, as they were unable to move about while forcibly stationary in their chairs. What began as strictly “Victorian Whites”- bloomers, corsets and hoopskirts – has evolved into an amalgam of historical feminine icons – Indian princesses, Hawaiian handmaidens and fallen medieval queens.

When a certain roll of industrial-grade Saran Wrap runs out, Melora will disband the band.