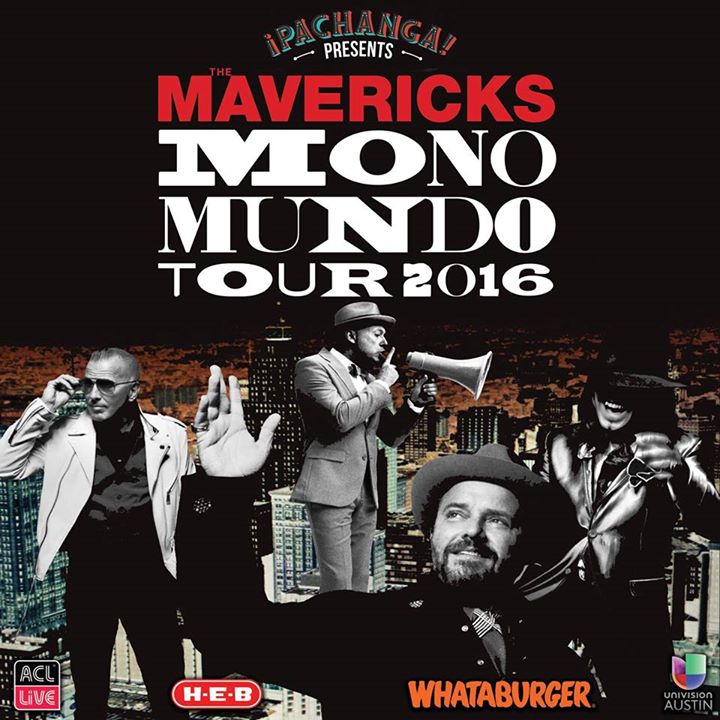 “The world has too much strife, racial and social divides being fed 24/7; it’s non-stop. It turns normal, loving people into brainwashed zombies who can’t come together. Maybe it’s the hopeless romantic in me, but I’d like to make a place where all people can come together.”
— Raul Malo

It sounds like lofty “hippie speak,” something the Grammy winner jokes about, but Raul Malo, the son of Cuban immigrants, and his musical comrades believe in bringing people together – often in the name of good times and great music – which is the most universal language of all.

“One of the things we love about our shows is we get all walks of life, all ages, all colors, all politics, all genders, all religions,” frontman Malo states.

From their earliest shows as a garage band playing the punk clubs on Miami Beach, THE MAVERICKS have had a skill for getting people to groove. Drawing on a mix of classic country, cow-punk and standards, Malo and company left South Florida, bringing their rhythmic fervor and Latin machismo, along with Malo’s lush baritone, to the world.

In 2013, after numerous years as a band, multiple gold and platinum albums, world tours, breakups and reformations, The Mavericks recorded their critically-acclaimed album IN TIME and re-introduced music lovers to the band’s genre-defying melting pot of pop music.

With the new release of MONO, The Mavericks find themselves making the most relevant music of their career.

“The experience of making this record was quite unique. We had the luxury of a very finely tuned band and the energy from the last two years of touring under our belts. We all believed that it was going to be special and I think we would all agree that, our record MONO best represents what our band does live,” expresses guitarist Eddie Perez.

While in the studio to record the new album, the band realized that their songs required a different approach. They felt drawn toward the idea of creating an album that shines through its songwriting and instrumentation in a singular mindset without relying on stereo tricks of modern recording – so the idea of recording in mono was born. Drummer Paul Deakin explains, ”As is often the case with The Mavericks’ plans, the idea to mix the record in mono came about spontaneously. During the recording process we would go into the studio around noon and listen to vinyl records for some extra inspiration. At some point, someone noted that almost all of the recordings we were listening to were mixed in mono. Our producer Niko Bolas said, off-the-cuff, ‘we should mix this record in mono.’ And we thought, we can’t get away with that – so of course … we had to.”

Longtime keyboardist Jerry Dale McFadden adds, “Most of these songs were recorded live in the studio with very little overdubbing. Some people might even be surprised to know that the tracking vocal is the vocal you hear on the record. Raul didn’t go back in and re-sing anything.”

With MONO, the band embraces cultural and musical diversity. Malo’s songwriting builds on the compositional craftsmanship of early-twentieth-century musical elegance yet demonstrates his skill for writing music that is progressive and timeless. From the thrusting opener “All Night Long” to the pensively sheer “Fascinate Me” and the chaotic thrill of “(Waiting for) The World To End,” the band seamlessly shifts gears.

Elements of ska play a prominent role in songs like “Summertime (When I’m With You)” and one of the most rockin’ tracks, “What You Do To Me,” which Perez believes “has all the energy and style that best represents what it’s like to be at a Mavericks show. It’s a stylish frenzy of electricity and relentless backbeat. This is definitely one of my favorites on the record.”

The seductive swing of “Stories We Could Tell,” the vintage country shuffle of “Out The Door” or the randy blues of “The Only Question Is,” show the band’s instinctive affinity to a variety of musical styles.

“During the writing process, I found myself wanting certain things. When you hear Cuban or world music of any kind, you may have no idea what the singer is saying, but you can feel it. That was what I wanted: to evoke a feeling so you could feel it! When you’re ready to go out, you put on this album… and it creates a vibe, a mood for your night,” says Malo.

“What Am I Supposed To Do” echoes the soulful sounds of The Four Tops or The Spinners while “Pardon Me” and “Let It Rain (On Me)” mine the desolation of road life and stand as MONO’s most somber tracks. McFadden explains, “ ‘Let It Rain (On Me)’ is my idea of a perfect song. It’s hard to write a very simple, catchy song, but Raul has always had a knack for that. It’s why recording the album in mono actually works. Only a great song can stand tall in a single channel mix, not dressed up with all kinds of bells and whistles that a stereo mix would have. It’s really why this record works in mono so well. Not many acts could pull that off. Not many would even try, is my guess.”

“When we went in to record this record, we were very resolved: we’d been through the time on the road, making the last album, living together as friends and as a band…We have nothing to lose, and only the music to gain,” says Malo.

ABOUT THE PACHANGA LATINO MUSIC SERIES

In 2016, the Pachanga Latino Music Festival is growing the Austin celebration of Latino music and culture to a year-round program, by evolving into a quarterly concert series at Austin City Limits Live at The Moody Theater (ACL Live).

The Pachanga Latino Music Series is the latest evolution of the critically acclaimed Austin, Texas, based festival, which was dedicated to promoting a vibrant blend of Latino-created music and art and its impact on contemporary American culture. This series presents world-class Latino talent to Austin audiences, with a concerted focus on bringing more of central Texas’ Latino and Hispanic communities to experience live music at ACL Live, a world-renown state-of-the-art concert venue in the heart of downtown Austin.

Promoters from both the festival and ACL Live are working together to grow the series into an institution lasting for years to come. Pachanga Latino Music Festival founder Rich Garza says of the evolution, “I couldn’t think of a better home or team to work with for the next phase of Pachanga than ACL Live and the amazing folks there. I’m really looking forward to our new approach of bringing in more top-level acts throughout the year.” And there is a rich history from which to draw; from 2008–2015, Pachanga presented—on multiple stages—a wide-variety of traditional and modern genres of music from the United States and around the globe during a day-long festival at Austin eastside park, Fiesta Gardens. Past festival artists include Calle 13, Intocable, Julieta Venegas, Los Lobos, Kinky, Ximena Sariñara, Los Lonely Boys, Bomba Estereo, Grupo Fantasma, Brownout, Bostich + Fussible, Celso Piña, El Gran Silencio, Michael Salgado, Bobby Pulido M.I.S., Toy Selectah, Pacha Massive, Sergio Mendoza y La Orkesta, and many more.

Past partners from the festival are also supporting the series, including Univision, HEB, and Whataburger. Both the ACL Live porch and the W Austin terrace will be utilized to provide space for festive sponsored activities and food vendors, especially for the family-friendly shows like Pocoyo Live Show, the first concert in the Pachanga Latino Music Series happening Sunday, February 28th. Pocoyo Live Show will deliver a host of surprises and discoveries seasoned with the best of children’s music, and both Univision and HEB are providing a fun-filled Sunday afternoon of activities and goodies at ACL Live right before the afternoon concert. And to celebrate the launch of the Pachanga Latino Music Series, ACL Live is offering special pricing to Pocoyo Live Show for all past Pachanga Latino Music Festival attendees, while supplies last.