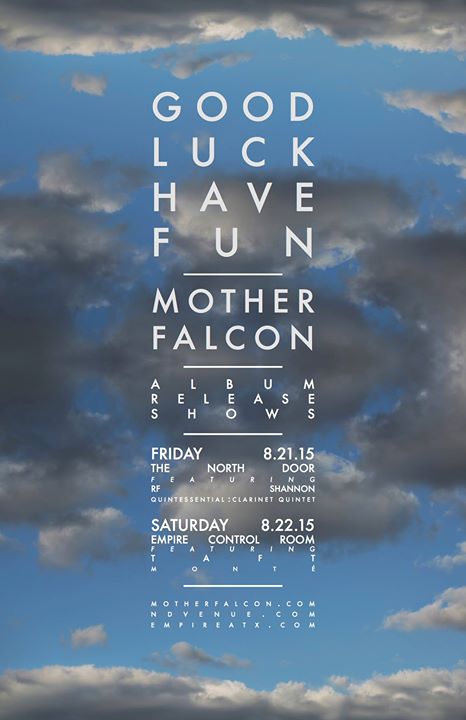 ***This is a 2 night, 2 venue release party! COMBO TICKETS FOR BOTH NIGHTS $25 in advance only at the link above.

Mother Falcon return with their third full-length album GOOD LUCK HAVE FUN, slated for release August 14th on BitCandy Digital and Punctum Records. Seven years, two albums and hundreds of shows on from Westlake High, this unlikely indie orchestra takes a leap into the unknown, blowing up their usual way of composing and recording together in a conscious effort to push themselves into new stylistic and sonic realms.

As such, GOOD LUCK HAVE FUN doubles down on both sides of Mother Falcon. The adventurousness is more adventurous, with fully half the album comprised of experimental instrumental soundscapes composed as the score to an upcoming documentary about competitive gaming. Inspired by Bowie’s Low, 60s improv iconoclasts AAM, Koji Kondo’s score for Majora’s Mask and the psychedelic drone of Fuck Buttons, the instrumental pieces ebb and flow in tension between unresolved crescendos and throbbing, jagged minimalism. Conversely, the rest of the album may be Mother Falcon’s most accessible music ever, with a stronger emphasis on rhythm, concise arrangements that move the vocals to the fore, lyrics grounded in universal themes and a wealth of hooks, upon hooks, upon hooks.