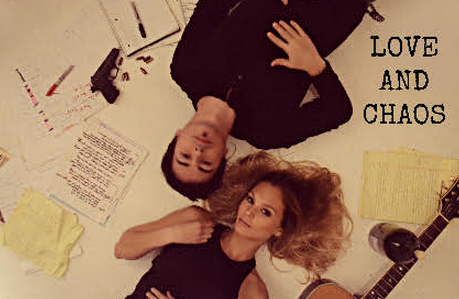 LOVE & CHAOS is the new duo from TX singer-songwriters & long-time collaborators, AJ Vallejo & Kendall Beard. Fresh off the heels of Kendall’s stint as a semi-finalist on American Idol, she hired AJ, an accomplished producer & rock veteran leading his band of brothers in the Austin band Vallejo, to produce her full-length debut, All Around Girl. The album was a work in progress, to say the least, spanning 3 years before it was finished for release. “Looking back, I feel like the long workspan really benefited me as a songwriter because I was honing my craft with every song we worked on and kept pushing the envelope to make a better result..”, says Kendall, “that result was me being able to channel solid and worthy melodies & lyrics almost efforlessly.” AJ joined on as Kendall’s guitarist in her live band and soon after they were back in his Austin studio working on the new material Kendall was bringing in at a feverish pace. In no time she was sitting on her completed sophomore effort, Here Comes Trouble (due this fall). But the songs kept coming..

After noticing Kendall & AJ’s onstage chemistry during a fiery Austin performance attended by record label friends of the duo, it was suggested that they entertain the idea of pairing up and starting a project as a duo. After the holidays, they entered AJ’s studio and within two months cranked out 17 songs. The stand-out track, Summer Song, is a prime example of what this joining of musical forces is capable of. “We push each other alot..”, AJ suggests, “push, pull, yell, laugh…chaos, hah. Just listen to the songs, they don’t lie.”