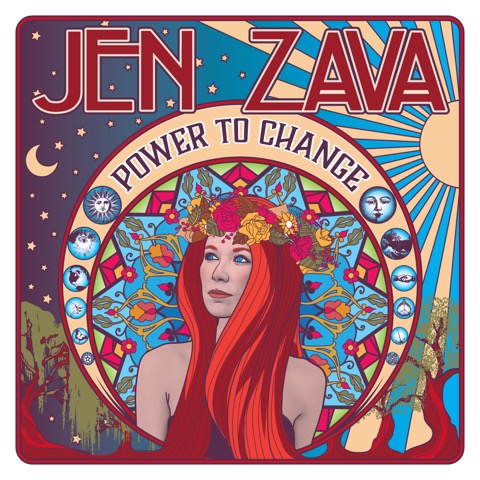 Fiery and soulful Austin-based indie rock siren Jen Zava announces the forthcoming release of her debut solo album “Power To Change” set to be released Friday, June 2, with an official album release party on Thursday June 1 at The Townsend located at 718 Congress Ave. Suite 100, Austin, Texas 78701. Doors will be at 7:30 p.m. and the show will begin at 8 p.m. Tickets are $10 and can be purchased here: https://www.eventbrite.com/e/jen-zava-power-to-change-album-release-the-townsend-tickets-32670155314.Ten percent of ticket and album sales will be donated to Kids in a New Groove to provide instruments and music lessons to children in foster care. To learn more about the nonprofit, please see: www.kidsinanewgroove.org. For information on Jen Zava see www.jenzava.com.

Formally known in the local music scene under her full name Jennifer Zavaleta, the time has come for Zava to take center stage as she reinvents herself with a brand new solo project. The 11-track debut album exposes Zava’s vulnerability, strength, hopefulness and desire to improve herself and the world around her.

“I recorded ‘Power to Change’ over the past five years, with songs written during the course of the last 20 years of my life,” Jen Zava said. “Major phases of my life are represented on this record: The single and free, fiercely independent younger version of me, moving across the country from Georgia to Texas chasing the dream of music, turned the married and pregnant version of me walking along the beach in South Texas contemplating life and what it all means, turned the mom version of me, navigating the profound changes that come along with parenting, hoping and praying that everything will turn out ok while still following that dream that brought me to Texas in the first place.”