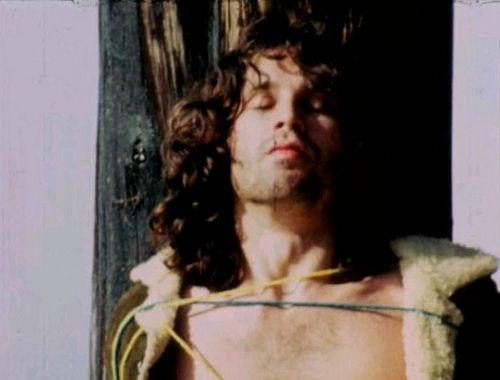 Jim Morrison (THE UNKNOWN SOLDIER) and Andy Warhol (PORTRAIT OF TED O’NEILL) donated these original short films to Cinema 40 for their archive. Restorations of the films will screen alongside original works by Gregg Barrios made during that period, featuring on campus Vietnam protests and UT visits from Jonas Mekas and Allen Ginsburg. Introduction by Gregg Barrios.

Films in this program:

THE BOYS OF NEW YORK (BONY) 1967. A film by Gregg Barrios.
BONY chronicles a day in the life of Warhol superstars and poets Gerard Malanga and Rene Ricard on a madcap trip from the Factory, the Chelsea Hotel, Horn & Hardarts to the silver painted Factory. Along the way these merry pranksters are joined Ruby Lynn Reynor, Tom Naef, Mario Anniballi, Ivy Nicholson and young Leonard Cohen. Filmed in B&W and Kodachrome with a 16mm Bolex camera Warhol provided. A portrait of a NYC long-vanished. Special Jury Finalist, 1968 Ann Arbor Film Festival.

FLOWER POWER THRILOGY (1966-1968). These short 8mm films were shot by Barrios for his film diary. They reflect the awe that the new generation was blooming…

GINGSBERGURU. Allen came to Austin to chant and read and conduct cleansings with his haromonian. He was the true counterculture presence of that era. Music: “The Inner Light.” (The Beatles).

TEX-MEKAS. The godfather of the experimental and underground film also came to Austin to preach sight and sound of the new indie film-making scene. A Village Voice film critic Mekas tours the city at high speed velocity all the while urging the cameraman to let the healing of pure light of truth abound. Music: “I’m So Glad” (Cream).

TRIBE 67. As the outrage over the Vietnam War grew, Austin was among to hold protests against LBJ’s fatal expansion of the War. Students at UT were also protesting the draft wondering if their number was next. Nevertheless, on a bright summer day, the protestors took to the street marching as soldiers of peace. Their journey ends in the park where psychedelic bands and their devotees celebrated. Music: “I’m Waiting for my Man.” The Velvet Underground.

THE UNKNOWN SOLDIER. (1967) A film by Jim Morrison and the Doors. My poet friend Gerard and I attended an after-hours at The Scene featuring Jimi Hendrix and the Doors. Afterwards, the two poets, Malanga and Jim spoke how new music and film were delivering the news to the youth. He studied filmmaking at UCLA and co-directed a film clip of their latest song. He later sent a copy to Cinema 40 to screen at the onset of our programming. The LA Weekly critic called it as powerful as Coppola’s Apocalyse Now. Peace out, Jimbo!