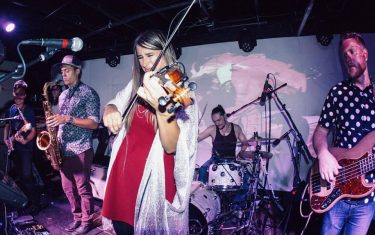 Don’t Miss Austin’s Ruby & the Reckless On ‘Nashville’ This Week!

The band’s headliner Ruby Jane Smith is no stranger to the spotlight. As the youngest fiddler to ever be invited to play the Grand Ole Opry at the age of 10, Ruby Jane has played with big names like Lady Gaga, Blues Traveler, Sheryl Crow and ZZ Top. She’s even recorded with legendary Austin performers Asleep at the Wheel and Willie Nelson.

“Ticket Out” is the first official music video from the band.

Nashville premieres at 8 p.m. on Thursday, January 5, on its new home, CMT.