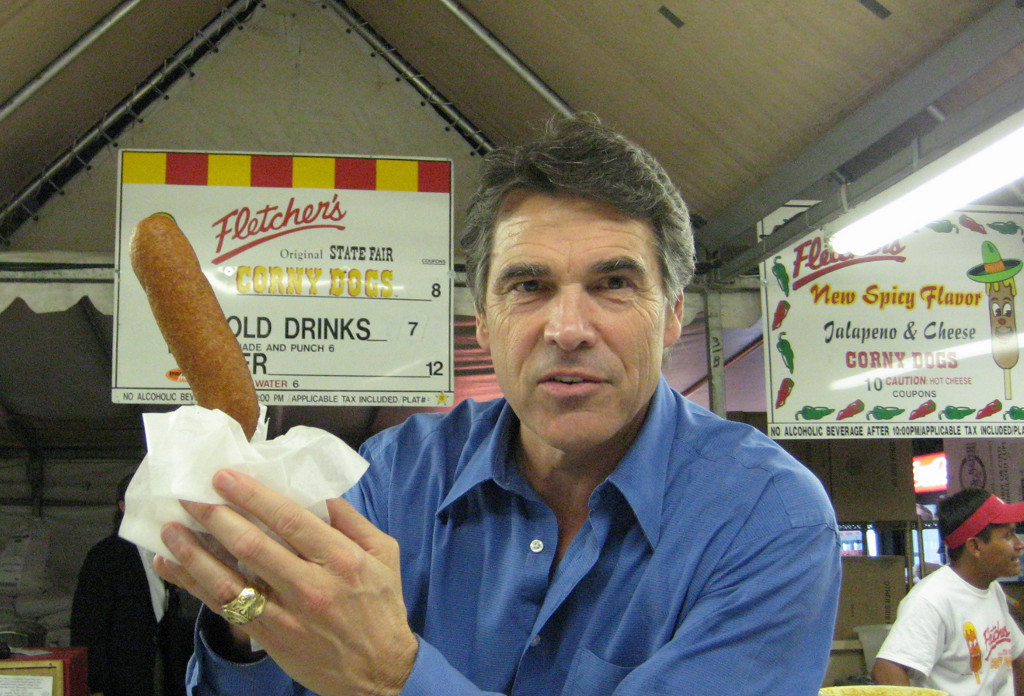 Gov. Rick Perry had a rough day today. You might have heard about it. He sort of got booked on felony charges, which is a bummer for any public official with presidential aspirations. And after getting fingerprinted and mugshot-ed, ole’ Rick needed a little pick-me-up. Going through an ordeal like his, who wouldn’t?

Perry’s Twitter feed from Tuesday looks like an endless stream of “thank you” posts directed at fellow Republican politicians and friendly talking heads, like the always-right Fox News opinionator Sean Hannity and the feminist-bashing blogger Erick Erickson. He’s a man clearly girding for a fight.

So here’s Perry, cussing all these liberals who’ve hounded him all the way into the jailhouse — nevermind that it’s almost entirely Republicans manning the prosecution — and he’s looking like he’s just had it up to Here. Naturally, Perry decides to do what any Austinite in the know would do after a hard day, and he swings by Sandy’s for some ice cream (although technically, Sandy’s serves frozen custard, but this isn’t Wisconsin so we don’t really differentiate unless it’s Blue Bell or Amy’s).

Before you say anything, no, Sandy’s is not pictured above. We just couldn’t resist using a photo of Perry holding a corn dog.

So anyway, at the end of his parade of “thank you” shoutouts to everyone from Ted Cruz (whom he actually thanked twice) to Jeb Bush to John Cornyn, Perry capped off his Really Bad Day with this final tweet of temporary relief:

“We were surprised when he came in to get ice cream, but we were a little upset that he didn’t get burgers too,” Isaac Alba, a Sandy’s employee, told Austin.com. “You know, it could have helped him maybe get over what he’s dealing with now. But it’s still good that he came by Sandy’s before he has to go back to court and all that other stuff. He didn’t really say anything — he said hi, and I took a picture with him. But that was it.”

In the photo Perry ultimately published, he’s hugging a woman named Brenda, the manager on duty at Sandy’s on Tuesday afternoon. She was not available for comment, and Isaac did not have time to give her full name because hungry customers were lining up and he had to run (which is good thinking, Isaac — don’t let us get you in trouble).

For those not in the know, Sandy’s is a great little Austin ice cream and burger joint off Barton Springs near South First Street. They are so dug-in to the community that they don’t even need to have a website; Austin folks just know, Sandy’s is the spot if you need some comfort food in a hurry. Their location is particularly convenient for people leaving Zilker Park, Barton Springs or the spillway — a big plus because Sandy’s burgers and shakes really hit the spot after a Saturday afternoon outdoors. It’s just a thing around here.

To his credit, Perry did know where to turn for support in Austin after this bruising first round. Sandy’s take all kinds, even if those kinds include individuals with sketchy criminal backgrounds (so long as you’re polite and wearing clothes, basically). Of course, whether that says anything about Perry’s defense attorneys remains to be seen.

The only thing is that’s sure about 2014’s political scene in Austin is that things are going to get interesting, basically starting now. Here’s the latest from Austin NBC affiliate KXAN-TV: