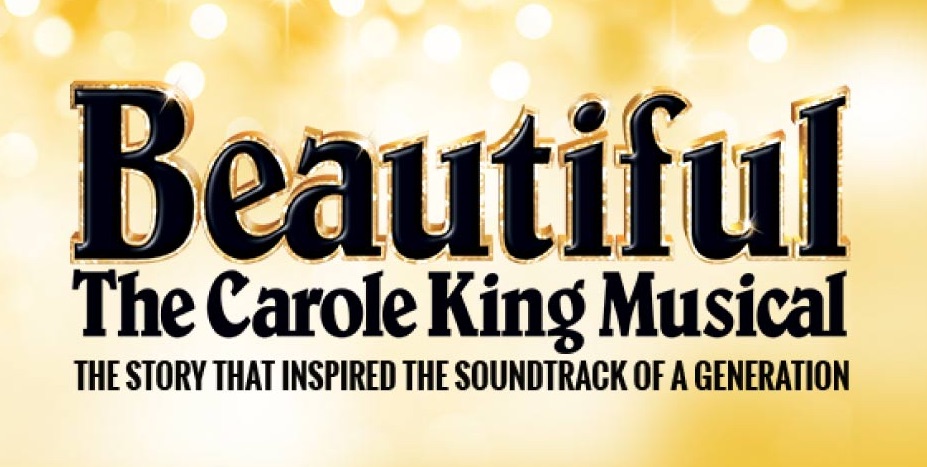 Broadway Is Coming to Austin—and You Could Win Tickets!

Beautiful—The Carole King Musical will premiere at Austin’s Bass Concert Hall (on the UT campus—map) March 21–26, 2017. This Tony- and Grammy Award-winning hit tells the inspiring true story of the early life and career of the legendary and groundbreaking singer/songwriter, who ultimately became one of the most successful solo acts in popular music history. 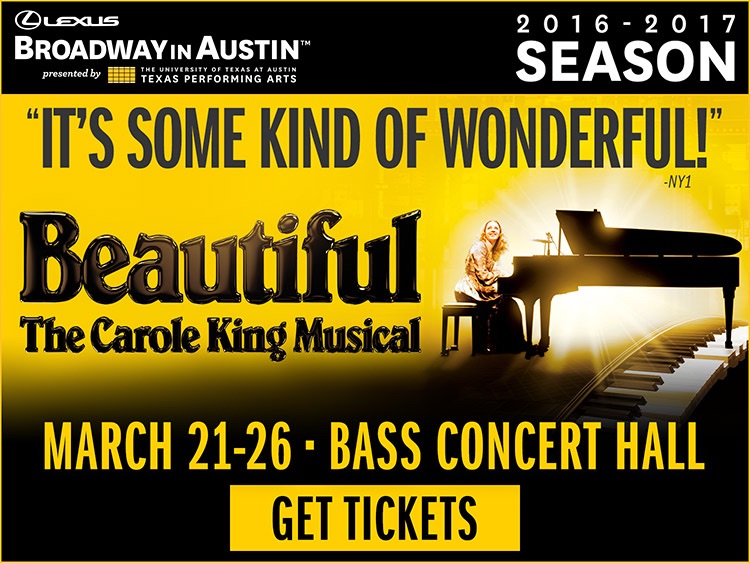 Long before she was Carole King, chart-topping music legend, she was Carol Klein, Brooklyn girl with passion and chutzpah. She fought her way into the record business as a teenager and, by the time she reached her twenties, had the husband of her dreams and a flourishing career writing hits for the biggest acts in rock ’n’ roll. But it wasn’t until her personal life began to crack that she finally managed to find her true voice.

Producer Paul Blake says, “Carole King might be a native New Yorker, but her story of struggle and triumph is as universal as they come—and her music is loved the world over.”

Originally opening on Broadway at the Stephen Sondheim Theatre in January 2014, the show has broken all box office records, recently becoming the highest-grossing production in the theatre’s history. Featuring beloved songs including “I Feel The Earth Move,” “One Fine Day,” “(You Make Me Feel Like) A Natural Woman” and “You’ve Got A Friend” along with the title song, Beautiful took home two 2014 Tony Awards and a 2015 Grammy Award. 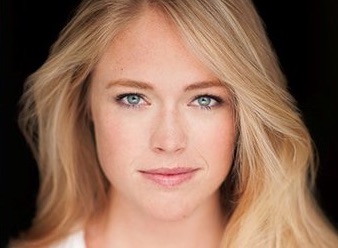 Recently, Free Fun in Austin had the pleasure of communicating with Erika Olson, who plays Cynthia Weil, the great songwriter and Carole’s best friend, in Beautiful. Olson came to the production fresh from Carnegie Mellon’s prestigious theater program, and is said to be a spunky, fun talent, just like the real Cynthia Weil. Here’s the brief interview:

What about Carole King’s life story drew you to get involved with this production?

Olson: So many facets of Carole’s life story [drew me in]! But especially, her resilience and compassion in the face of the many obstacles that came her way. Her ability to juggle a failing marriage, two children and a hugely successful songwriting career all before she was 28 is beyond admirable and incredibly inspiring.

Is there anything about Carole’s life story or her rise to stardom that you relate to on a personal level?

Olson: Carole sold her first song to Donnie Kirshner when she was just 16 years old. I, like Carole, also knew what I wanted to do at a very young age. I chose to leave my small hometown in California at age 15 and move to Boston to pursue a better theater education. At the time, I wasn’t aware of how crazy that sounds, I just knew it was what I had to do if I wanted to achieve my dreams, and it’s that love and commitment that eventually led me to this truly Beautiful show!

Did anything surprising come up as you learned more about this artist and her history?

Olson: I had no idea how many songs Carole wrote but didn’t cover herself. I was familiar with her Tapestry album, but was shocked to find out she wrote so many other hits (like “The Locomotion,” “One Fine Day,” “Up On the Roof” and “Pleasant Valley Sunday,” to name a few!).

What about her story would you most hope to “get right” if Carole herself were sitting in the audience, watching a performance?

Olson: Carole did, in fact, sit in the audience and watch us perform just months ago. She talked to our cast before the show and reminded us of how she never gave up on her dreams regardless of how impossible or improbable they seemed. We have an incredible opportunity every night to tell a story of relentless drive and passion for what you believe in, that resonates with everyone. I would hope at least one person in the audience comes away from this show feeling that.

Carole King has been a national icon for decades, and even young people who may not have heard her name have probably heard her songs. So there is a timelessness to her work. Is there anything about her life story or her message that feels fresh and timely (or timeless) to you?

Olson: Throughout her life Carole has been a trailblazer for diversity; she stands up for what she believes in with grace and fearlessness. Her lyrics remain timeless because of the deceptive simplicity that cuts deep to the core and resonates with all listeners. I think, currently, the ability to understand and share the feelings of others is especially important, and that is something Carole has always done effortlessly through her beautiful music.

Thank you so much, Erika, for your thoughts and insight! 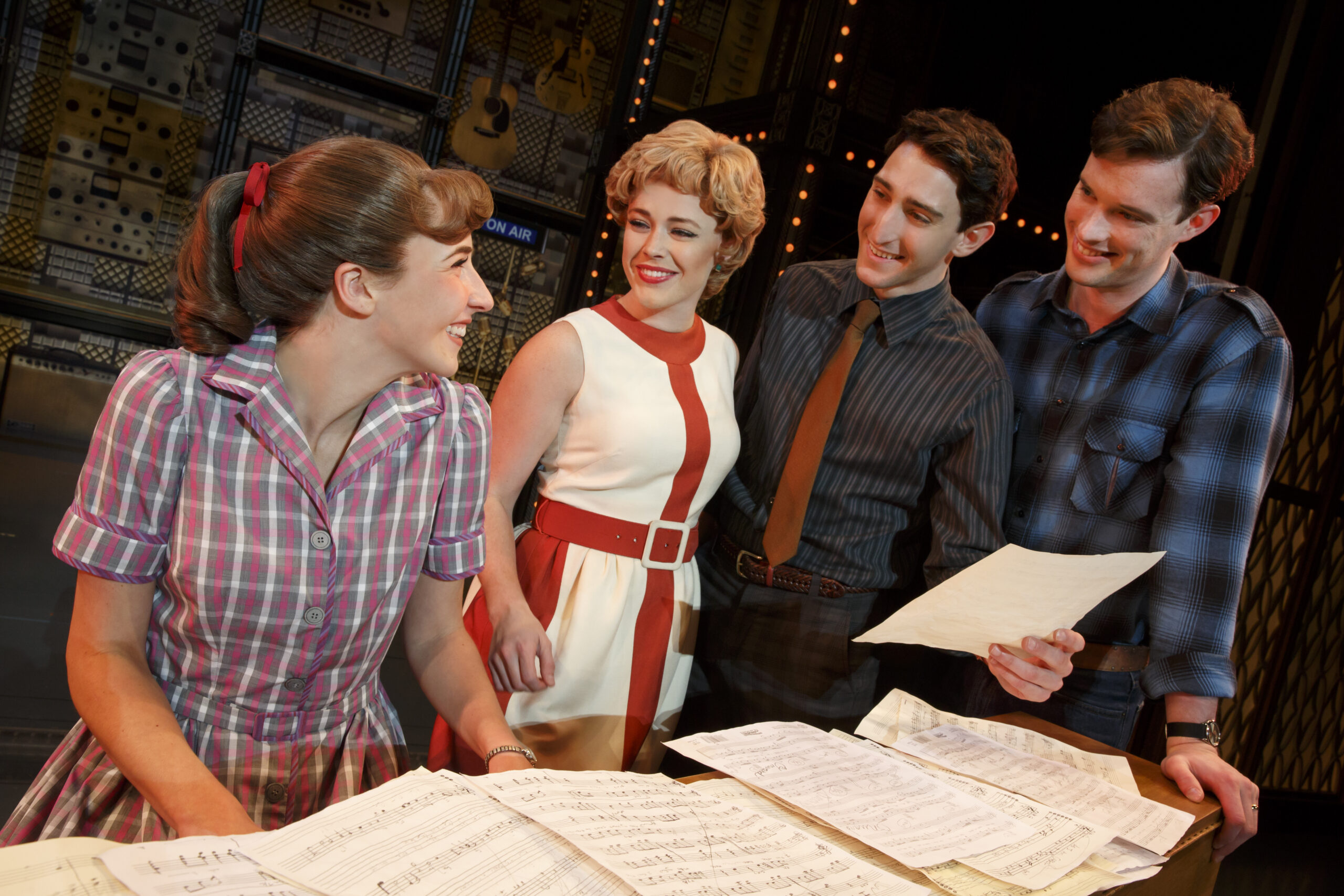 Purchase Tickets to the Show—and Enter to Win our Free Tickets Giveaway!

You can also enter our giveaway for a chance to win two free tickets to opening night! (Value: $158; opening night show is at 8 PM on Tuesday, March 21, 2017.) To enter this giveaway, simply fill out the form below. The giveaway will close on March 15, 2017, at 11:59 PM. One winner will be selected at random and contacted by email. Official Giveaway Rules.