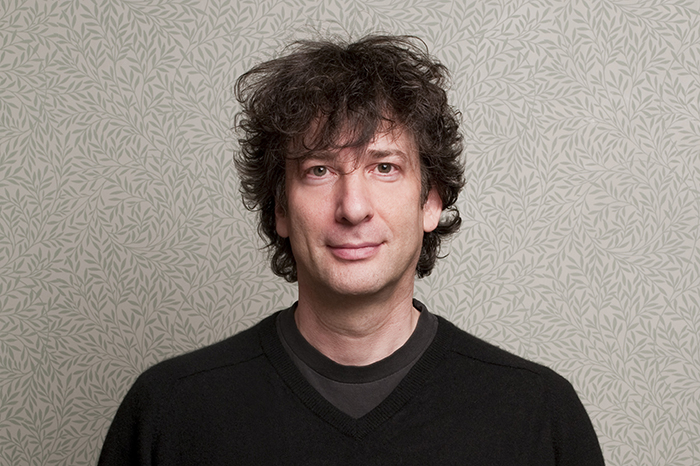 Author Neil Gaiman was greeted with thunderous applause when he took the stage at The Long Center last Friday, but it didn’t take long for him to quiet the room as he spoke about the devastating attacks that had just taken place in Paris. As he pondered the last moments of the 80 innocents murdered in a Parisian theater not so unlike The Long Center, he read from his May 2015 essay “Credo,” a piece about the pervasiveness and power of ideas.

“I believe that it is difficult to kill an idea,” he muses, before delivering a potent statement about the futility of terrorism. “I believe that in the battle between guns and ideas, ideas will, eventually, win.”

Ever a man of ideas, Gaiman is considered to be one of the most popular science fiction and fantasy writers worldwide, for good reason. In print, he’s a masterful storyteller. And as Austinites and out-of-towners discovered last Friday evening, his stage presence is nothing short of electrifying, too.

Throughout the evening, Gaiman alternated between reading his work and answering the audience’s questions about his writing and personal life. In response to inquiries about his own work, Gaiman recounted how writing The Sandman cured his chronic nightmares, what it was like working with Terry Pratchett on Good Omens, how he became inspired to write The Graveyard Book, and why it took him 24 years to actually finish the manuscript. Additionally, he announced the completion of his latest nonfiction book, The View from the Cheap Seats, whose title incited hearty cheers from the folks in the back of the theater.

Along the way, Gaiman made no less than three shameless personal confessions. First, he routinely writes love letters to his wife, American singer-songwriter Amanda Palmer and remembers the exact moment he fell in love with her (which incidentally felt like being “hit over the head with a love-shaped brick”). Second, he steals ideas from his children. Third: He misses “the old days” when Palmer still thought his accent was adorable. Gaiman refused to provide a newlywed couple with baby names (fearing eventual vengeance from the child in question), but instead shared his secret to maintaining a strong marriage. “Talk in the morning, talk late at night,” he said. “Never forget why you like talking to each other.”

For aspiring writers, Gaiman shared his remedy for Writer’s Block, also in three parts. Number one: Admit that you have a problem and are simply “stuck.” Number two: Diagnose the problem by returning to the point where everything was working. And number three: Immediately resolve the issue or write something else for a time. He also emphasized the value of actually finishing projects, as well as reading ravenously and indiscriminately.

Friday evening marked Gaiman’s third-to-last scheduled appearance before he withdraws from public life for at least a year to write a novel and care for his new son. Despite using the “R” word (see: Retirement) on multiple occasions, Gaiman assured fans in Austin that he’s only taking a hiatus and will soon resurface.

Whenever a writer starts talking about quitting, it can be tempting to imagine that their best work is finished. In spite of his ever-growing collection of prestigious awards, one might even put Gaiman in that category, as if he’s peaked. But he doesn’t want to hear it. That’s another thing he made abundantly clear on Friday night: Even if deadline guilt or the joy of invention didn’t motivate this man to keep writing, something else would.

As Gaiman explained, he constantly has no less two dozen ideas swimming around and colliding in his head. We should know by now just how hard those are to kill.

Thank you to everyone who was at the #gaimanATX evening at the @longcenter tonight. It was healing for me, and I loved reading new things. — Neil Gaiman (@neilhimself) November 14, 2015