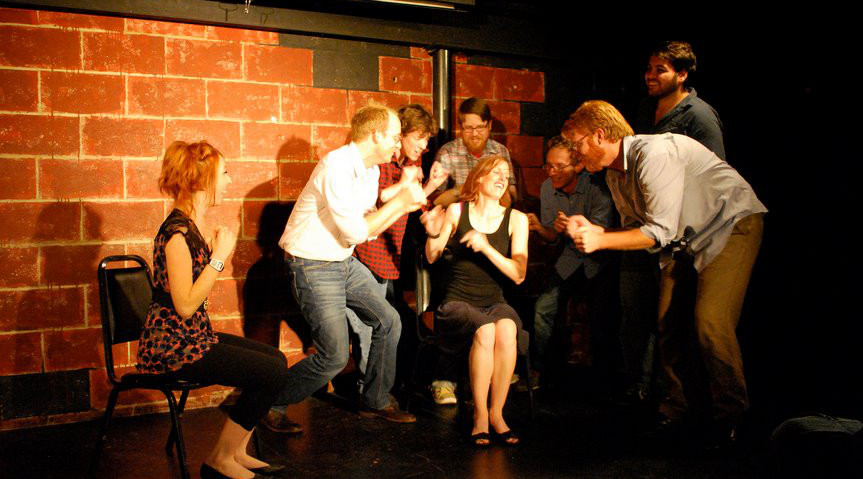 Once upon a time, about 10 years ago, a great big hurricane ravaged New Orleans and scattered her citizens far and wide. Part of the diaspora found refuge in Austin, where a group of comedians decided to plant roots. The troupe was called ColdTowne, and they became one of the city’s premiere comedy institutions.

A decade on, the award-winning ColdTowne Theatre is one of the best places in Austin to experience improv comedy. There are shows every night of the week, and enough classes and workshops to keep even the keenest student of comedy busy for years.

Just in time for the holidays, the core founders of ColdTowne have invited some new partners to the table, making a quiet party of three a much more flamboyant party of seven. Several members of longtime headlining troupe, The Frank Mills, have decided to join forces with the original ColdTowne leadership, with an eye on a more perfect comedic union — and then some.

The addition of Erika May McNichol, Bob McNichol, Dave Buckman, and Rachel Madorsky to the already stellar lineup of Michael Jastroch, Justin York, and Arthur Simone may not be apparent to the regular BYOB patrons of ColdTowne Theater, but their expertise will be a vital part of ColdTowne’s continued growth.

We caught up with Erika recently, who is acting as the marketing manager for now, with a few questions about how this is all going to work. Here’s what she (and the rest of ColdTowne’s leadership, albeit unattributed) had to say…

What catalyst(s) compelled the founders to seek partners in the company?

There are a lot of moving parts and it’s tough to run when one third of the owners live out of town and the other two are taking on administration along with teaching, performing, and outside creative projects. We needed a breath of fresh air and who better than these smart, talented people who have been there since the beginning and share our passion? Who’s ultimately in charge and how does that person(s) plan to navigate the expanded ownership?

There’s a board of directors – and each person is in charge of a department, from education to show production to budgets. Bob McNichol is CEO and oversees managers of different departments, but we’re all responsible for getting it done.

How does this expansion of ownership benefit ColdTowne?

First, fresh eyes and professional energy from trusted artists who have been with us already means there’s not going to be just one person fielding the phone calls when a toilet overflows. That alone is going to mean that some of the minor stuff that got lost in the shuffle will get taken care of easier.

Second, these guys have real world business acumen. They’ll bring a level of expertise behind the scenes in terms of their ability to manage large teams and crunch numbers – skills that we lack. ColdTowne is on organization of HUNDREDS when you factor in students and performers and for one or two full time people to manage that is tricky.

What qualities make the original founders of ColdTowne feel at home in Austin?

Friendly, welcoming people and audiences that are able to approach live comedy like it’s live music. When we told people that we were moving to Austin from New Orleans, many said, “Austin is like New Orleans with a functioning government.” And they were right. It immediately felt like home with some perks.

How does ColdTowne plan to stay relevant and vital in a rapidly changing Austin?

The way to stay relevant in comedy is to keep challenging yourself and your audiences beyond their comfort zones.  We will continue to take on challenges, off stage and on, to make sure we are ahead of the curve in what is funny and interesting.

A big part of that is the quality of our teachers and directors.  And with the confluence of tech companies, artistic and academic communities here, as well as 150 people moving to Austin every day…. there is a never ending supply of the uninitiated to train and develop into rock star comedians or repeat audience members.

People who go through our training program tend to either stick around the theater for years or they pack up and make the move to Chicago, LA or NY.  Those that move to a bigger market also tend to be head and shoulders above the others in their troupes and classes there.

What is the funniest thing about merging so many personalities into a business venture?

Comedians are able to playfully follow the logic of “bad ideas” that end up being brilliant ones.

Where do y’all see ColdTowne in five years?

We want to produce the strongest roster of comedic talent in the southern U.S.

Coldtowne Theater offers classes and live comedy seven days a week. For tickets and information check out their website here.