The richness and diversity of Austin’s food scene can sometimes feel like an afterthought behind its tastes; we rarely consider the history and the context in which many of the dishes and foods we love and eat regularly exist. Sometimes it feels as if we blinked and all of this culinary ingenuity appeared. The truth, however, is much deeper. Courtney and I were lucky enough to attend the Taste of Black Austin, an event celebrating African American chefs and African American culinary history. For more than 100 years, Austin’s food scene has been guided and shaped in part by African Americans, bringing cooking and healing influences from all over the world. 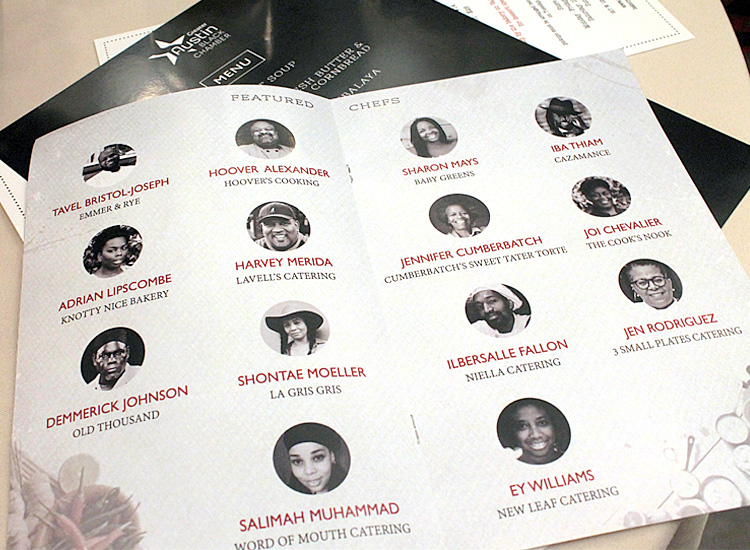 Taste of Black Austin involved a multitude of African American chefs who are all either taking part in the Austin food scene first hand, or have in the past. Amongst these esteemed chefs were heavy hitters like Hoover Alexander (Hoover’s Cooking) and Demmerick Johnson (Old Thousand), along with up-and-comers like Iba Thaim (Cazamance) and Shontae Moeller (La Gris Gris), just to name a few. These talented chefs prepared some killer food which went hand in hand with awareness and knowledge of how pre-industrial African American culture helped shape and inspire much of the food we enjoy as central Texans. 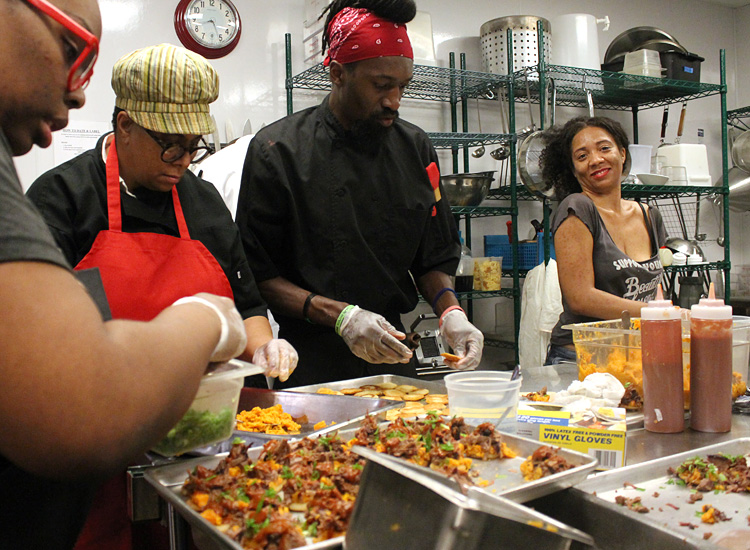 For the first course, we tried peanut soup, which was not as heavy as it sounds, almost like a finer peanut paste, but nothing like peanut butter. It had a little kick; the spice really put this dish over the top for me. 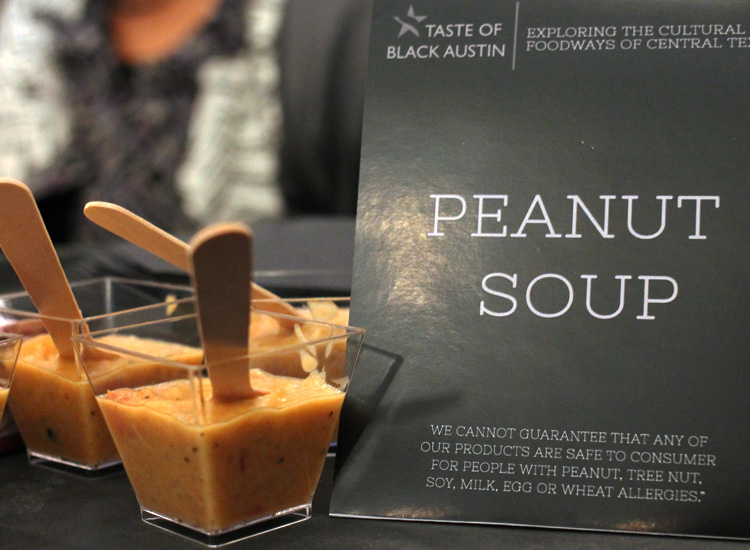 Next up was the spicy Austin jambalaya, a creole staple, this one done with barbecue sausage and pork stock. It was dynamic and way different than most of the jambalaya I’ve had in the past. Really tasty. 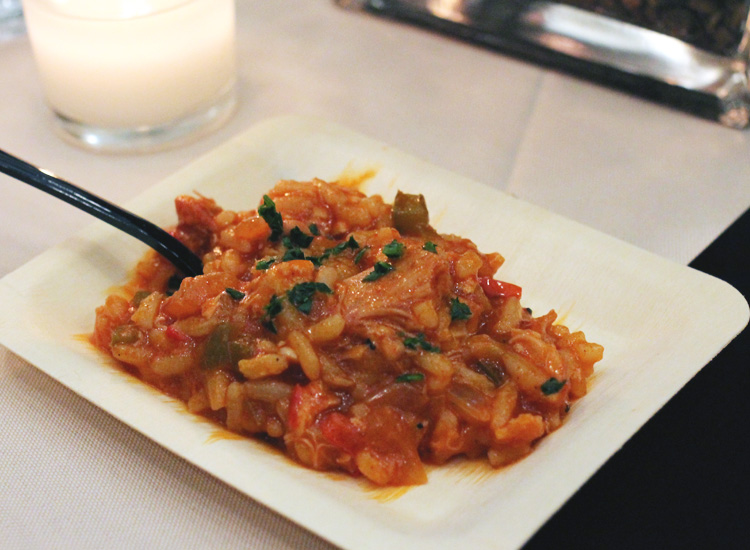 The honey vegetables were fantastic — not in your face sweet, which I was scared they’d be. A mix consisting of potatoes and zucchini, amongst others, in a semi-sweet, semi-tart sauce. 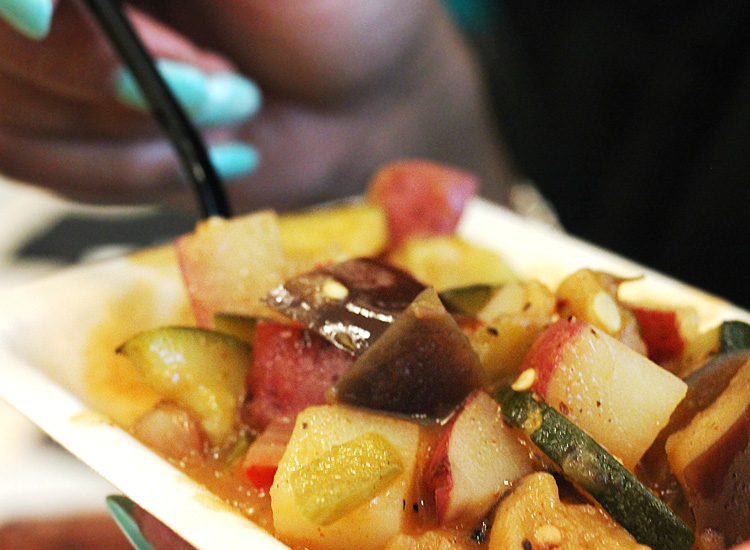 Next up was the central Texas chili. This dish was one of the cornerstones of the evening. It told an almost 200 year old story of emancipated African Americans as entrepreneurs. Some of the earliest African American chefs in central Texas cooked chili and sold it at chili stands. Austin’s close proximity to San Antonio made it optimal to gather the ingredients and recipes used for what was known as a “Bowl of Red.” The bowl was a classic with ground beef and beans, served with a side of cornbread. You could, in the most literal sense, taste the history in this dish. 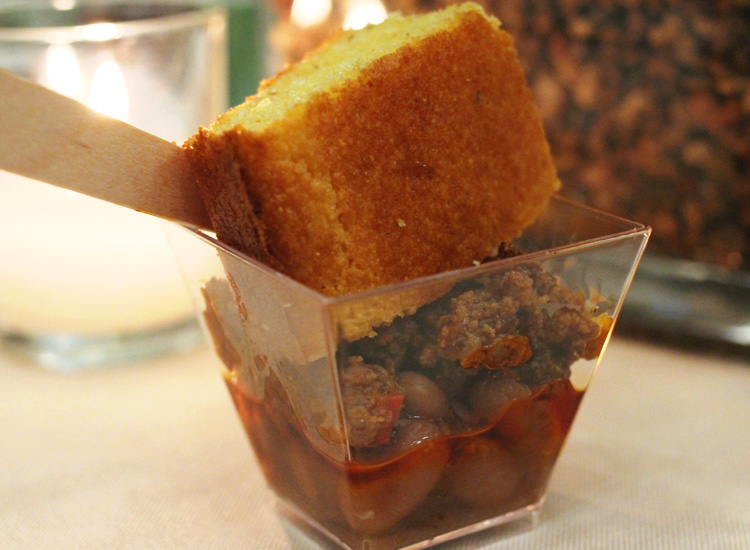 The next dish was my favorite dish of the evening: fried chicken medallion with corn pudding and collard greens. The corn pudding was so soft, sweet, and delicate it was like eating air. Delicious, delicious air. It was one of those dishes you could keep eating and not realize it, which could be good or bad. The collard greens and fried chicken were, of course, fantastic in their own right. The greens were a traditional ham hock-based recipe but had a sweetness to them I’m normally not used to, but it added a welcome complexity. 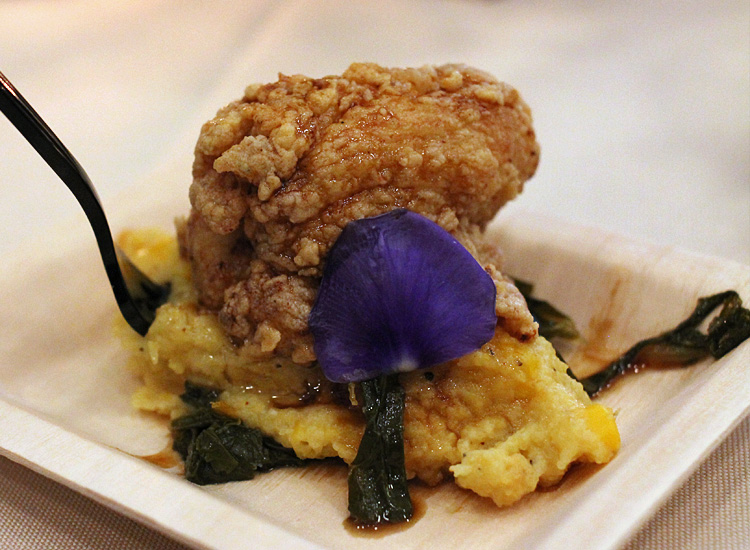 The hoecake topped with smoked brisket and sweet potato ancho chili sauce was next; it was the embodiment of what Taste of Black Austin was about, put into today’s context. Hoecakes, at their inception, were a dish made by enslaved African Americans who had little to work with, we learned. The hoecake, by design was a cornmeal cake that was thick and dense, almost like a thick potato chip. It played really well with the brisket and sweet potato ancho chili sauce — the ingredients were made for each other. 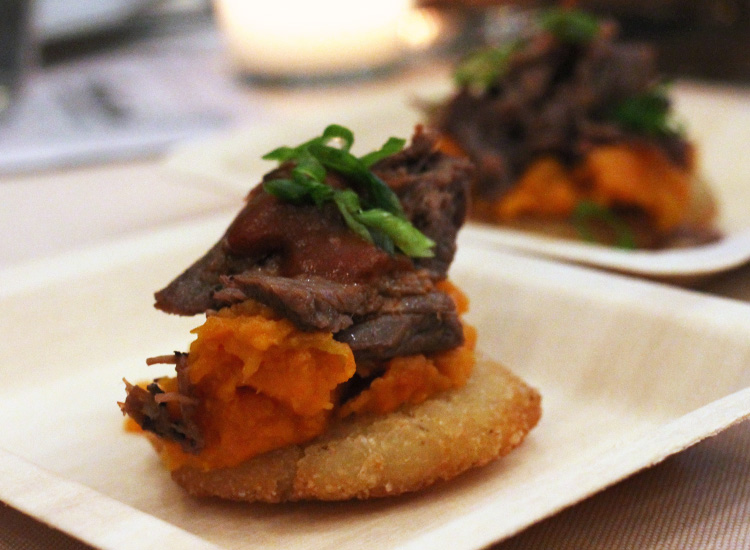 After all of the fantastic cultural and culinary heaviness we experienced, it was now time for dessert. The first was a “Sock it to Me” cake, an age old cinnamon, brown sugar, and pecan cake that, as legend has it, was made by a gentleman to give to the woman he was trying to court. However, the one we tasted was made with a twist, a variation made to resemble tres leches including a layer of cheesecake topped with sea salt caramel. 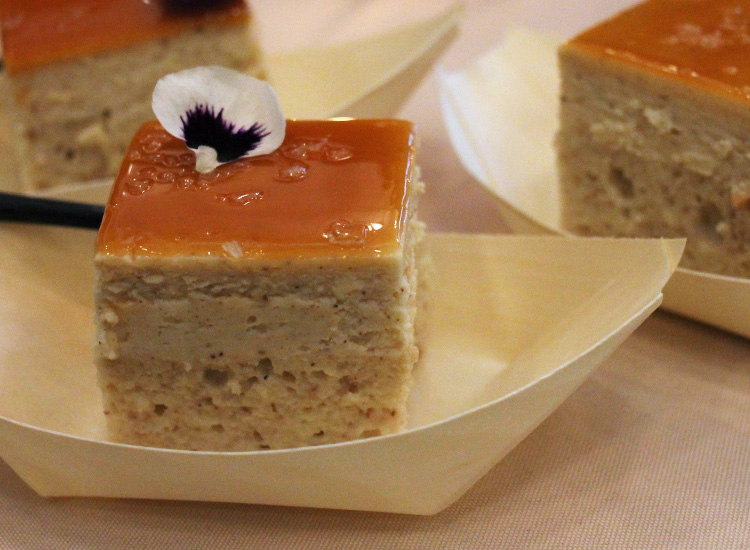 Sock it to Me Cake, Photo by Phat Foodies

In addition, we got to see a demo by Jennifer Cumberbatch on how she makes her sweet potato pie. She uses a quiche dish to make the sweet potato pie more dense and crispier; certainly not any less delicious, though. 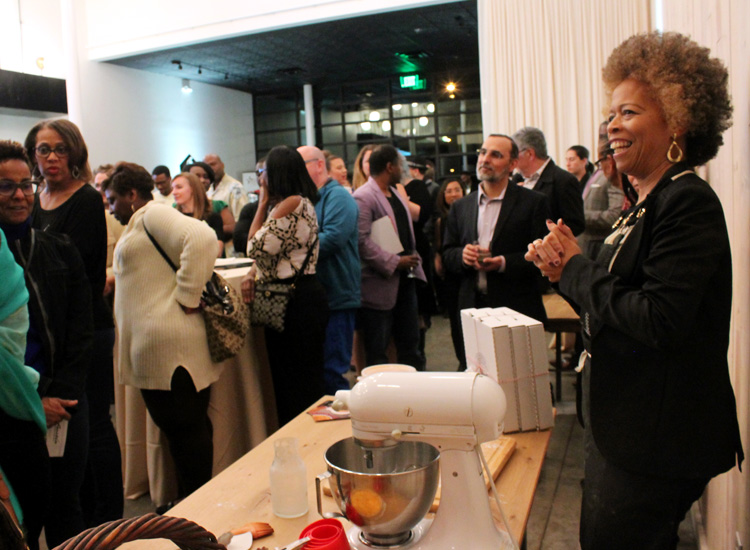 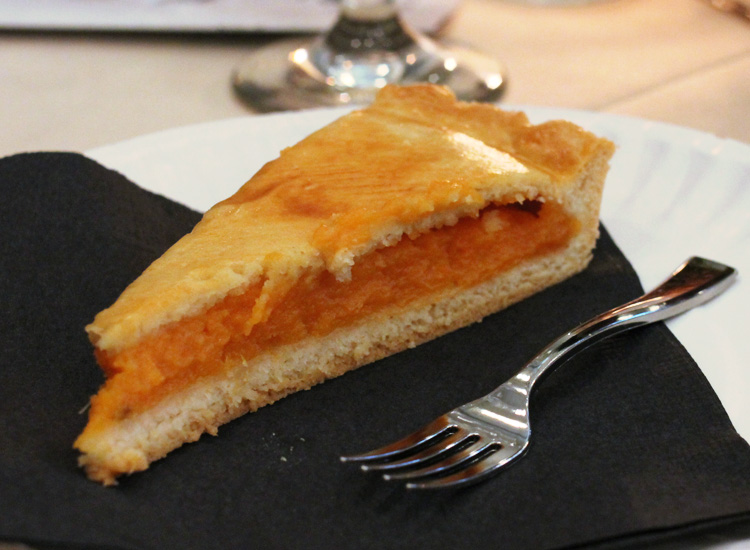 Rounding out dessert were teacakes and “Sweet Texas Candy”– a very tasty, highly addictive praline that had heavy caramel tendencies, more so than what you’re used to in pralines. 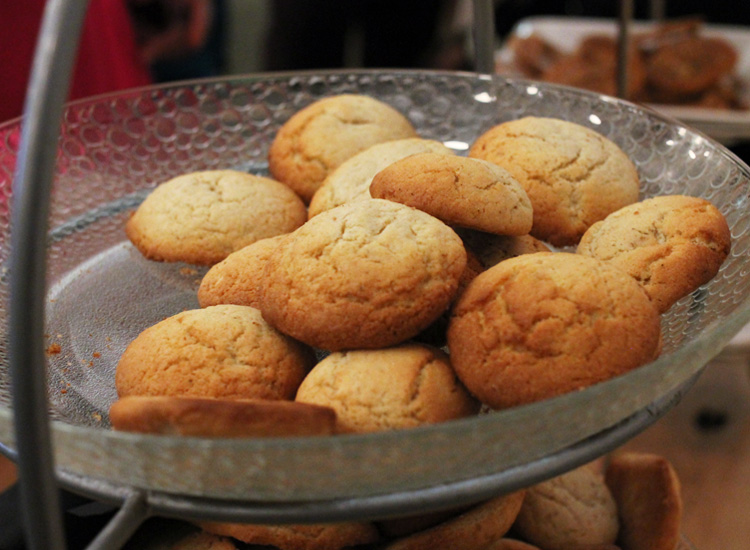 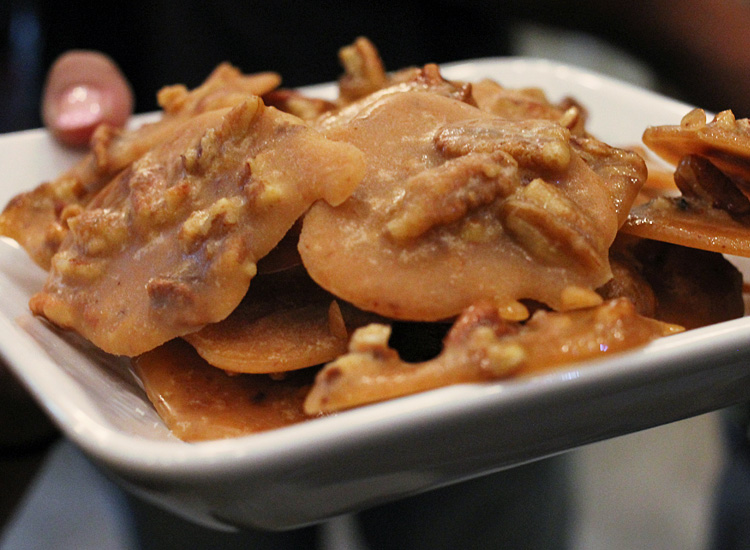 The African American food experience is vital to the Austin food experience. Learning the rich and dynamic history of what we know and love as Central Texas cuisine was special and unique! 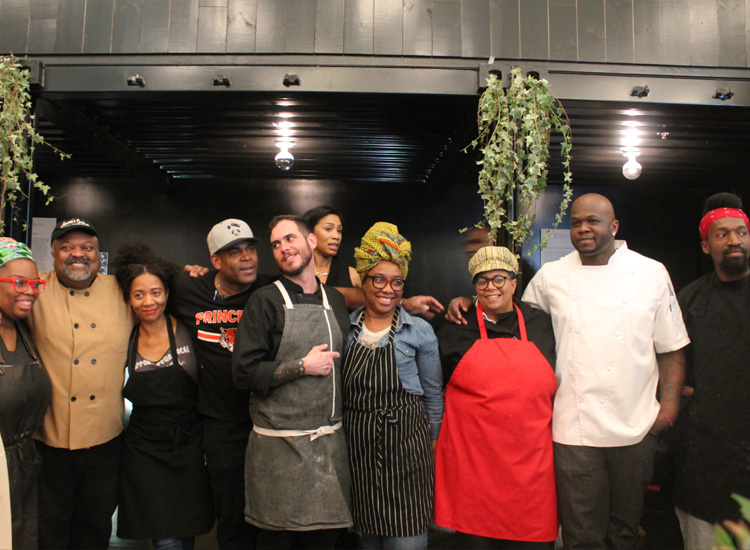