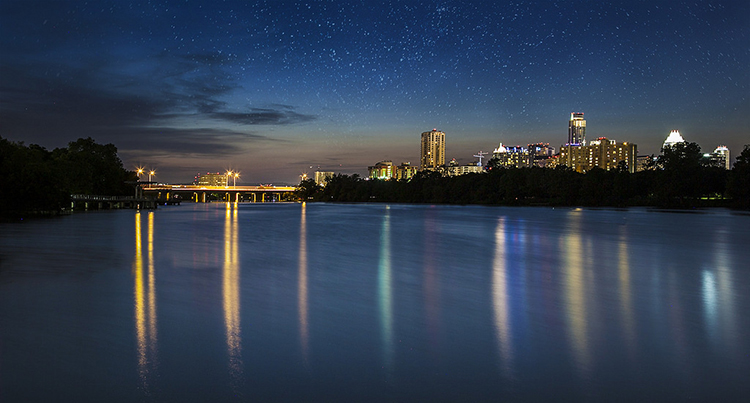 Believe it or not, Texas boasts some of the “darkest” skies in the United States — meaning that our great state contains an abundance of areas that provide optimal visibility of stars, planets, constellations, meteorites, and other astronomical phenomenon. Austin may be growing exponentially right now, which automatically means that we’re creating increasing levels of light pollution, but when you compare our fair city to other huge Texas metropolises like Dallas and Houston, our night sky visibility is actually pretty good.

With that in mind, we decided to publish an Austin stargazing guide to clue locals in to some of the best (and worst) places to stargaze and watch meteor showers, along with several tips for selecting the best viewpoints and tracking weather conditions to get the best visibility.

If you’re thinking about stargazing at Mount Bonnell, Wild Basin Wilderness Preserve, St. Edward’s University, Zilker Park, or even the Loop 360 Bridge Overlook — all of which are problematic due to light pollution or APD’s tendency to cite trespassers after hours — we seriously recommend that you consider one of these 10 amazing Austin stargazing viewpoints instead: The University of Texas at Austin, Austin Community College, and Southwestern University all host public star viewings at their respective observatories. At these events, you’ll get the chance to look at the night sky from the best viewpoints our fair city has to offer — and through epic expensive telescopes to boot!

UT houses two observatories — one located on the top roof of Robert Lee Moore Hall, which is generally open to the public on Wednesday nights while school is in session, and another at Painter Hall, which welcomes guests on Fridays and Saturdays during the regular school year. ACC and SU schedule public star viewing nights only every once in a while, so you should check their astronomy departments’ event calendars for updated information before you go. The Texas Museum of Science and Technology and Girlstart both offer interactive displays and educational shows aimed at teaching star enthusiasts of all ages about the wonders of the night sky in their planetariums. TMST maintains a full lineup of programs, each of which runs roughly 50 minutes long and features a “live star show” with a trained astronomer; view their current event schedule here. Girlstart’s “Starry Night” schedule is more limited, so be sure to check their website for current event dates and times.

Additionally, Eagle Eye Observatory at Canyon of the Eagles Resort in Burnet and Mayborne Science Theater in Killeen are also well known for hosting awesome astronomy events if you’re willing to make the drive. Texas Parks & Wildlife is quite proud of its Dark Skies Program and actively encourages their state parks, nature preserves, and natural areas to organize educational stargazing programs and install outdoor lighting systems that do not contribute to light pollution. Multiple parks within 1 hour’s drive time of central Austin — including McKinney Roughs Nature Park, Westcave Nature Preserve, Pedernales Falls State Park, and McKinney Falls State Park — host frequent star parties, which often include talks from experienced astronomers who bring their telescopes for guests to look through. Sometimes, these events even include refreshments, guided night hikes, and bat and owl watching. Score!

Rangers at McKinney Falls State Park, Blanco State Park, and Pedernales Falls State Park don’t usually host star parties, but these parks are still great places to do some independent stargazing of your own because they’ll have much less light pollution than city parks closer to downtown Austin.

If you’re thinking about driving a little (or a lot) farther to visit any of these locations, check TPW’s stargazing events calendar to see if the park that’s caught your eye has any official star parties coming up. If you’re a star loving Austinite, then get excited because we’ve got a killer local astronomy organization called the Austin Astronomical Society and they host stargazing events in the greater Austin area all the time! Check out the group’s website and resources to get connected and learn more about the night sky, and be sure to take a look at their online calendar here if you think you might like to attend any of their events!

Additionally, a national group called Astronomy on Tap periodically visits Austin, offering attendees the opportunity to sip delicious beverages while getting educated about the stars and planets.

Man-made dams are fairly ideal for stargazing because they provide observation areas and wide views of the sky, and because they are usually located away from the largest urban sprawls where light pollution is at its worst. Though we haven’t been to either location ourselves, our research turned up multiple suggestions that Mansfield Dam in West Austin and Granger Lake Dam are quite decent and popular local stargazing spots. While stargazing in Austin might be better than stargazing in Dallas, or other heavily populated areas with tons of light pollution, visibility won’t be that great downtown, even from the best viewpoints on a super clear night. However, the sky will literally open up if you drive 30 miles out of town in any direction. If you drive south, you’ll hit the small communities of Buda and Driftwood, where you can basically pull over anywhere along country backroads to see a sky full of stars. You’ll have to drive past Cedar Park and Georgetown to smaller communities like Leander, Jarrel, Hutto, and Taylor to find dark stargazing spots north of Austin, but if you’re willing to make the trip, we’re pretty sure you won’t feel disappointed once you get your first looks at the beautiful Milky Way over pastures and hill country oaks. Just east of Austin, Elgin is a favorite haunt for telescope-packing and amateur stargazers alike. It’s basically a paradise of farmland, which means you can drive down virtually any backroad, turn off your lights, and chill out under a blanket of stars. We’ve never been there personally, but lots of locals swear that the Highway 95 stretch between Elgin and Bastrop is seriously amazing. Don’t forget a blanket!

Expert tip: If you enjoy watching Texas-sized thunderstorms roll in over ATX, Highway 95 is apparently the place to do it! While light pollution will eventually taper off if you drive north and south of Austin, heading east or west is generally considered to be the smartest course of action and present optimal opportunities for rewarding and romantic (hint hint, all you lovers!) stargazing experiences. Head up to Lakeway to watch the stars by the shores of Lake Travis, or attend Dripping Springs’ annual Texas Night Sky Festival, which celebrates the community’s official “Dark Sky” status. Dripping was the first Dark Sky Community in Texas back in 2014, so you know you have a lot to look forward to. You can learn more about that here. The International Dark-Sky Association certifies parks and natural areas across the world as “Dark Sky Parks” if they meet several criteria; first, certified Dark Sky Parks must have little to no light pollution and they must install outdoor lighting systems that do not cause any. Currently, the IDSA has granted 31 parks this certification, and believe it or not, Texas contains not one but FOUR of them. Visiting these parks is going to require a time commitment, but if you’re wanting the best possible stargazing conditions, they’re the places to go because they are located in remote areas far away from hazy urban sprawls.

Enchanted Rock State Natural Area is your closest Dark Sky bet. To get there, you’ll need to drive about two hours west from downtown Austin. Park rangers at E-Rock (as we Texas natives call it in slang) often schedule night hikes to the summit of the park’s infamous granite dome to facilitate stargazing, so definitely jump on that if you’re planning to visit. You might also consider dropping by UbarU Camp & Retreat Center nearby, which achieved official Dark Sky Park certification in 2015.

The next closest Dark Sky Park is Copper Breaks State Park, which is located northwest of Dallas. If you’re willing to drive the 5 hours required to get there, you’ll be rewarded with stunning stargazing views and organized Star Walks.

And finally, the ultra-remote and rugged Big Bend National Park is the uncontested king of stargazing opportunities in Texas. You might be tempted to settle for Davis Mountains State Park, which boasts an impressive Dark Sky rating of 2 and will only require 6 hours drive time from ATX, but trust us: you will not regret traveling the extra 30-60 minutes to Big Bend.

As you select a location from which to stargaze, keep the following advice in mind:

Flee light pollution. “Light pollution” refers to the way that haze from traditional outdoor lighting systems like street lights and highway floodlights “brightens” the night sky and makes it hard to observe stars and planets. Big cities like Austin unfortunately generate a lot of light pollution, so if you’re thinking stargazing, you should plan to drive at least 30 minutes out of town!

Don’t tresspass. Before you decide to stargaze in a public park or climb over that fence to lay out your blanket in a pasture, consider the possible repercussions of your actions. Cops are known to often bust (and fine!) stargazers at Mount Bonnell, for example, and farmers probably won’t take kindly to unauthorized use of their land. Let’s keep it legal, people!

Use a Dark Sky finder to locate optimal viewpoints. Some truly awesome folks have developed helpful “Dark Sky Finder” applications containing data on possible stargazing locations all across the world, so it’s worth doing some quick research on a site that you’re considering visiting before you actually head out.

Use a Clear Sky finder to check star visibility. Once you have decided on a stargazing spot, be sure to run your choice through a clear sky application to check to see how current cloud cover and weather patterns will effect your visibility. The best viewing will happen when the air is calm and still and when the ground is already fairly close to air temperature.

If you have a favorite lesser known backroad or lookout point that you frequent to admire the stars in or around Austin, we know that the chances are good that you won’t be willing to let others in on your secret to avoid overcrowding your haunt. We totally get that! However, if you’re ever feeling forthcoming, please feel free to share directions to your go-to viewpoints and show us your best stargazing photos on our Facebook, Twitter, and Instagram pages.

In the words of our very own Austin Astronomical Society, let’s keep Astronomy weird, Austin!