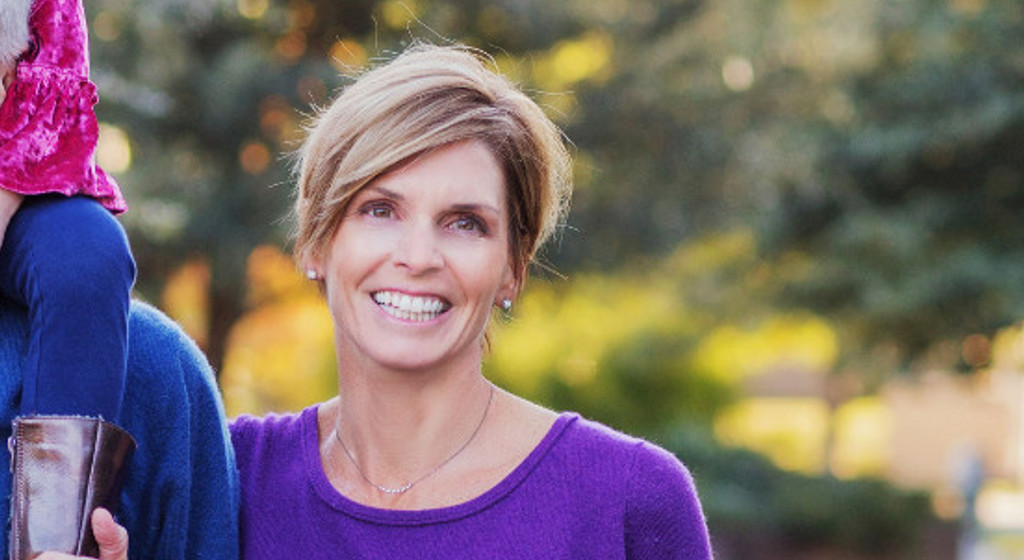 Kathy Terry knows how to change a belt for an exhaust fan or a pulley in a lemonade stand. She’s fixed plenty of broken appliances with a paper clip, keeps a tool box in her car, and is currently trying to convince her husband that she needs a welder. But on the day we met at P. Terry’s on North Lamar recently, Kathy was mainly after her daily iced tea.

Most days, the Terry’s like to eat something at their restaurants. With P. Terry’s, Kathy said she wanted to serve food that she could feel good about eating and would be happy to serve her kids. Her husband, Patrick, who’s the “P,” in P. Terry’s Burger Stand, is the entrepreneur or the “ideas guy” behind the business, as Kathy describes him. P. Terry’s is a nickname, by the way, from one of Patrick’s godson’s families.

In the beginning years of their business, when money was tight and the hours intense, Kathy was in charge of the operational side and most of the maintenance. Both of them worked long, often exhausting, shifts at the restaurant. The last time Kathy worked a full P. Terry’s shift was a week before giving birth to her first daughter. “I couldn’t even button my uniform,” she said. “I remember the look of pity on people’s faces when they saw me at the expo window.” You are reading “Abby In Austin,” a blog about Austin moms by Abby Roedel. Want to be featured here? Follow @AbbyRoedel on Twitter and say hi!

It turned out, that was actually a good time for Kathy to have a baby. The first few years of growing the business were hard – hard on her, and their marriage – and she was starting to feel burned out. They were three years in and P. Terry’s was starting to expand. The business was at a place where their employees were finally handling some of her responsibilities, giving her a chance to focus on family matters.

When her daughter arrived, however, working at P. Terry’s started to feel like the easier job. “I remember being overwhelmed at first,” she told me. Her inclination was to put a lot of stress on herself and try to be the “perfect” mom. “I had all of these ideas – that I’d puree all of their food, they’d only eat organic and not watch TV and then life happens.”

Fast forward seven years and Kathy now has two daughters and nine locations, with four more on the way.

Now that she has children, her days aren’t focused entirely on P. Terry’s. She sometimes works a lunch shift and concentrates on new projects engaging with architects and visiting construction sites, in addition to meetings at her girls’ school or for one of her nonprofit boards.

Philanthropy is a big deal to Kathy in both her business and personal life. Her family volunteers twice a month through the local nonprofit Little Helping Hands and every week she gives her time to Strong Start. She serves on the boards of Lift Alliance, Austin Children’s Services, SafePlace and HeartGift. The Terry’s have been a host family through HeartGift for a little girl from Belize and most recently a boy from Nigeria. It’s a model for giving back she’s trying to pass on to her girls. “I always tell my children if we are privileged enough with gifts of time or money, then it is our obligation to use those gifts to help people who are less fortunate,” Kathy said. “And we do that with our business as well.” As of last December, P. Terry’s has donated $400,000 to local nonprofits.

Kathy attributes her sense of community to traveling. When she was in her 20’s and 30’s, she worked contractually as a paralegal, which allowed for the flexibility to put in long hours for a year or so and then take months off to travel. She’s visited more than 40 countries, mostly by herself, all over Europe, Asia, South America and Africa. Guatemala, Turkey and Nepal stand out as countries that shaped her view of the world.

“These people have little if anything compared to the families in the U.S., but had an abundance of kindness, generosity, curiosity and compassion.” Her memories are of people who she didn’t know or couldn’t communicate with who gave so much and wanted nothing in return. “My wish for my girls is to realize that it’s the journey and the people you meet along the way that are important, not the destination,” she said. “Those experiences will shape the person they will become.”

At ages four and seven, Kathy is proud of the people her girls are becoming. “I love that they are very social and outgoing,” she said. “I love that they don’t really know a stranger. They want to know about things and meet people.”

She’s the more disciplined parent, she says, and the one who tries to be funny, but her girls typically just roll their eyes. She’s also structured their schedules, planning out weeks out in advance from lunches to homework to time with the girls. They’re expected to contribute, too – specifically, make the beds, unload the dishwasher, and feed the dog.

Still, moms often like to give each other advice, and she’s not above taking pointers. Some of the best Kathy said she’d ever received was that she alone is more than enough for her children. That’s one entry on a list of her favorite quotes stored on her phone. “My kids will be ok,” it reads. “They need me, not a perfect mother.”

In some ways, motherhood, especially when children are young, can feel like a daily race against time to get everything done. It exists in direct contradiction to the part of mothers that wants to slow it all down. Kathy feels that too. “My worry is the speed of life has gotten too fast,” she said, noting how technology is evolving alongside the expectations of today’s children. “I want my kids to enjoy childhood… It’s such a fast paced life and I wish I could just stop time.”

It’s a sentiment most moms can agree on.