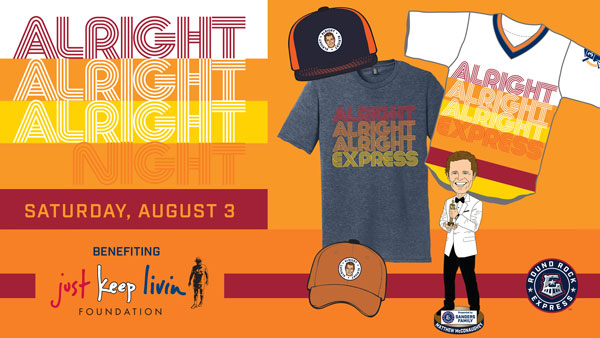 How to Lose a Guy Again

Apparently there’s a How To Lose a Guy in 10 Days revival in the works. No word on if or how the original cast will be involved but fingers crossed that Matthew McConaughey frosts himself in the new film.

Alright Night With The Round Rock Express

Exes Jennifer Aniston and Justin Theroux reunited for the most heartbreaking reason last weekend; the death of their beloved white shepard, Dolly. Theroux posted a series of pictures on Instagram honoring the beautiful canine. Dolly is survived by her three siblings: Clyde, Sophie, and Kumo. “The Leftovers” star rescued Kumo after Hurricane Harvey devastated the Texas coast. Though Theroux has moved on from Austin, he continues to support Austin Pets Alive! in a variety of ways. You can read more here.

Celebrities in Austin This August

It’s only the second day of the month but the August celebrity sightings have already started. Blink 182 and Lil Wayne performed at the Austin 360 Ampitheater last night and today, “SNL” alum Brooks Wheelan heads to town for a set of shows at Cap City Comedy Club. Carly Rae Jepsen is performing at ACL Live tomorrow while Nas and Mary J. Blige
\

\ will be at the aforementioned amphitheater. Read more about who’s headed to the ATX this month here.

Austinite Gabriel Luna posted a picture of the gang behind Marvel’s “Agents of Shield” on Instagram, marking their final day of production. He played Ghost Rider on the series. Next up you can see him in Terminator: Dark Fate alongside Arnold Schwarzenegger.

And finally, we love to give love to our fellow Austin bloggers out there. Gen Padalecki posted a fun little piece this week outlining how she and husband Jared get creative with date nights here in Austin. You can check out her blog nowandgen.com here.