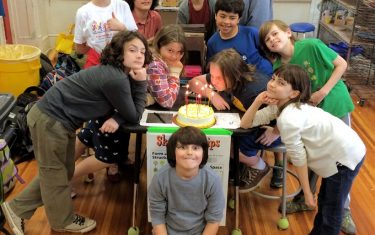 These Austin Elementary Students Are Building A Time Capsule With The Help Of A Dinosaur (And YOU!)

The students of Mathews Elementary are embarking on a project that will go down in history — by preserving the history of a historic Austin school. The Mathews Elementary Time Capsule Project officially kicked off on February 6 with opening efforts to raise funds for the  century-long time capsule which will be buried on the front lawn of this downtown Austin school.

Leading the charge (in more of a supervisory capacity) is Mazilla, the school’s unofficial mascot. He picked up the duties after a committee of Mathews students and parents conceptualized and designed the project to celebrate the school’s centennial anniversary. He’ll also stand as protector of the time capsule in the form of a three-foot-tall statue placed on the lawn over the capsule. 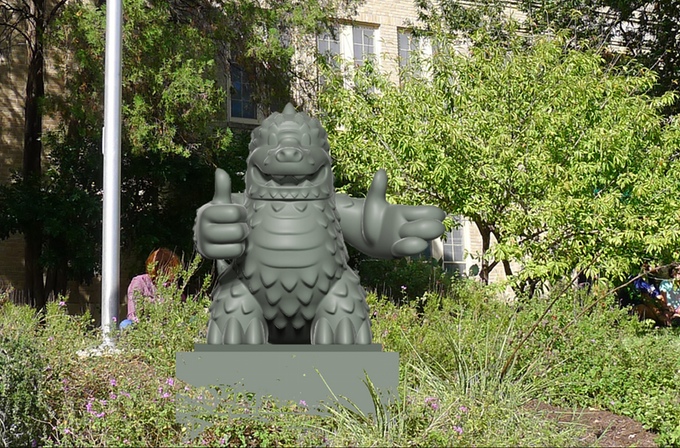 ”The time capsule is designed to be an internationally celebrated and locally loved public art project inspired by the weird and creative culture of Mathews Elementary and Austin,Texas,” a press release explained.

The fundraising goal for the project is to earn $12,000 via a Kickstarter page. If you’re wondering what all those funds are for (besides the beautiful statue of Mazilla, described as a Godzilla-like creature), they will also cover a high qulity, sealable steel vault with six capsules that include multiple twenty-year capsules and one one-hundred-year capsule that will remain in the chamber until the 2116-2117 school year.

$10,000 has already been generously donated by the Old West Austin Neighborhood Association to cover the cost of the architecturally-designed concrete and steel base, the watertight, airtight, dustproof, chemical-resistant and corrosion-resistant boxes required for the preservation of historical documents and artifacts, and the cast bronze commemorative plaques.

“I can’t think of a better way to celebrate the next hundred years of this historic school than by building a time capsule marked by a student-sized bronze statue of the school’s beloved mascot,” Sara Belknap, director of the project committee said. “Mathews Elementary has always been a great supporter of the arts and Austin has always embraced crazy and weird ideas. When our students grabbed onto this idea, we absolutely had to do everything in our power to make it happen. We’re calling on the Kickstarter community everywhere to help us make it a reality.”

The Kickstarter page is officially underway and will last until March 8, 2017. Learn more about the project and the variety of wonderful rewards that they’ve put together for backers (including admission to a taco party hosted by Tacos of Texas authors Mando Rayo and Jarod Neece, both Mathews Elementary parents, among many other items) here.