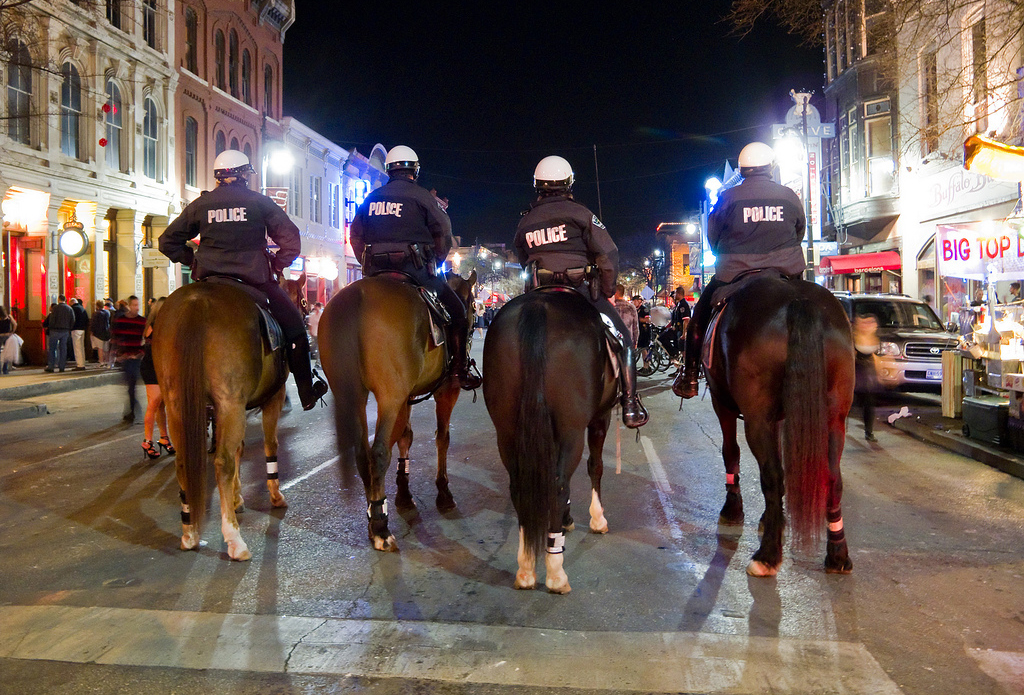 By now, you probably know a lot about Larry McQuilliams, the raging gunman whose post-Thanksgiving shooting rampage downtown shook us all up a little last week — but how much do you know about the Austin cop who took McQuilliams out? What Sergeant Adam Johnson did is pretty incredible.

Here’s how the scene played out, according to a timeline pieced together by The Austin Chronicle…

It was 2:18 a.m. on November 28. All those who had spent their Thanksgiving evenings painting the town were headed home as bars closed. Sgt. Johnson was riding his horse back to police headquarters near the end of his shift. That’s when the shooting started.

Larry Steven McQuilliams, 49, had thoroughly planned his attack. He wore kneepads, a tactical vest, and a Camelbak filled with water. He brought with him two rifles (an M&P 15 and an Arsenal model SLR 95), an assortment of IEDs, and most alarmingly, a map that detailed an efficient route to 34 different buildings — the Mexican Consulate, the federal courthouse, APD headquarters, and two churches among his list of targets. He had even written the words “Let me die,” across his chest and labeled a folded stack of clothing as “funeral clothes” in his home.

What he didn’t plan for was Sgt. Adam Johnson.

McQuilliams opened fire at the courthouse, a bank, and the Mexican Consulate before turning his sights to the Austin Police Department at 2:32 a.m. Johnson was standing near HQ, holding the reins of not one but two horses when McQuilliams arrived, shooting wildly.

Still holding onto the horses’ reins with one hand, Johnson returned fire with the other — and with such accuracy that Robin Hood himself might have been jealous. With a single shot from Johnson’s Smith & Wesson M&P .40 pistol, McQuilliams lay dead on the pavement more than 300 feet away, his might-have-been-deadly reign of terror cut short.

“What this officer did was phenomenal, especially if he didn’t brace his arm against anything,” long-range shooting expert and U.S. Army Major John Plaster told Fox News. “It was an extraordinary shot.”

Likewise, Austin Police Chief Art Acevedo praised Johnson for his marksmanship and also gave a nod to his department in a statement to the Austin American-Statesman. “For a guy to keep his composure [while] holding two horses with one hand and taking a one-hand shot with the other hand, it says a lot about the training and professionalism of our police department.”

According to the Statesman, Johnson told a local radio host that “he thanked God for being at the ‘right place at the right time.'”

It just goes to show that when we Texans say, “Don’t Mess With Texas,” we mean it.