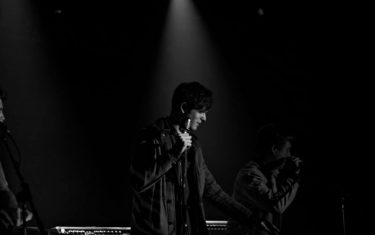 Aus10™ Live: 10 Bands You Should Not Miss This Weekend

Dylan Bishop at The Continental Club

Hailing from Dallas, young blues guitarist Dylan Bishop will be taking the stage at The Continental Club this weekend to perform songs that take obvious influences from legends such as Chuck Berry. Watch the video below of Bishop performing the tune “Eyeballin,’ to become wrapped up in his fiery guitar skills.

Gaining notice with their latest record Sound and Color released last year, Alabama Shakes have become an act that everyone is talking about. With deep and saucy vocals from front woman and guitarist Britney Howard, the Alabama Shakes’ bluesy vibe will settle you right into the weekend.

Fronted by Austin’s well-loved fiddle player Ruby Jane, her new band Ruby and The Reckless is a bit different than her previous projects. Performing music with a more chilled electronic vibe, this is the type of music that almost anyone can get into. Going out of her comfort zone, she will gain new fans while getting continued support from her devoted fan base.

Based in San Francisco, the Kronos Quartet has featured a rotating cast of musicians for over 40 years with 750 works written between all of the quartet’s members. Feeling the emotions of the songs as they perform, Kronos Quartet is perfect if you are looking for something more mellow this Friday evening. You can check out the groups abilities by watching their NPR Tiny Desk concert below.

Originally from Huntsville, Texas, country vocalist Cody Johnson has released six albums with his last, Gotta Be Me, being released in 2016. On the track “With You I Am,” newcomers get to hear his sultry voice while wanting to remember it for later listening.

The Mavericks at ACL Live

Weaving together country, Latin, and rockabilly influences, Florida act The Mavericks have got something unusual going. With up tempo tracks such as “Back in Your Arms Again,” the group tries performing different genres and putting their own spin on things, while still remaining strong as a unit. Knowing immediately that you are hearing something special, you won’t want to miss watching The Mavericks live this weekend.

Margo Rey at The Brass House

Writing songs that include tight funk and jazz grooves, there is no better to wind down from laughing with comedian Ron White, then listening to vocalist Margo Rey at White’s after party. Check out her performance at the Grand Ole Opry to see her magnetic performance.

Best known for his work in bands The Frames and The Swell Season, Glen Hansard will be coming to Austin this weekend to perform a solo show that you will absolutely want to get tickets for. With a powerful but mellow presence, Hansard is just the right performer for acoustic music fans and fans of Ed Sheeran.

Colvin and Earle at Paramount Theatre

Duo Shawn Colvin and Steve Earle are coming once again to The Paramount Theatre to wrap up their current tour. With tracks such as “You’re Right (I’m Wrong),” this country-folk duo is definitely worth seeing.

British singer James Blake will be stopping in Austin this weekend while he supports his latest release The Colour in Everything. With his soft electronic vibe and stunning vocal chops, wrapping up the weekend at ACL Live never sounded so good.

If you would like to check more of Lauren Gribble’s features, you can check out her website Listen Here Reviews.

New Orleans Saints Quarterback and Westlake High grad Drew Brees and wife Brittany are donating $5 Million to Louisiana to support Covid-19 relief.
- March 26, 2020
Here’s How You Can Help Your Community During the Quarantine in Austin

If you’re looking for a way to give back and don’t know where to start, this post is for you. Nobody can do everything, but everyone can do something.
- March 26, 2020
Here’s How To Swap And Barter For Hard-To-Find Items in Austin

Amid the virus panic, so much has vanished from our grocery stores that we are now turning to their neighbors for help finding free stuff in Austin. Here’s how it’s done.