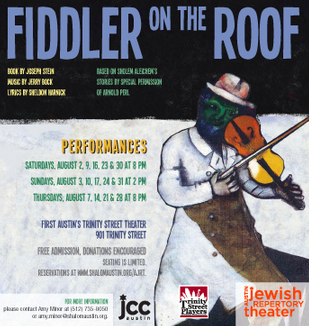 Area Theaters Celebrate 50 years of Fiddler on the Roof

To mark the 50th anniversary of one of the greatest musicals in history, Austin Jewish Repertory Theater and Trinity Street Players will come together to present Fiddler on the Roof, opening August 2, 2014 at Trinity Street Theater, located at 901 Trinity Street in downtown Austin.

Written by Joseph Stein, Fiddler on the Roof was based on Sholem Aleichem’s short story Tevye and His Daughters. First performed on Broadway in 1964, the production earned nine Tony Awards, became the first musical in history to exceed 3,000 performances, and grew to be a global cultural icon. The blockbuster’s classic songs — including “If I Were a Rich Man,” “Sunrise, Sunset,” and “Matchmaker” — were written by Jerry Bock and Sheldon Harnick.
Fiddler on the Roof centers on a poor Russian milkman named Tevye who struggles as his daughters fall in love and attempts to maintain his family values and their Jewish religious traditions in a time of exceptional change. As ethnic violence and modern dreams threaten his community, faith, and traditions, Teyve struggles with tradition.

Taking cues from the Chagall painting that inspired the musical’s title, the set will consist of a living art installation by scenic designer Ann Marie Gordon and artists Clara Foster Newby, Lyle Adair, Hank Waddell, Melanie Lewis, Lydia Apelgren, Richard Ewen, Barb Forrister, and Tatiana Nikolova-Houston. Together, in this intimate frame, audience and actors will experience both the joy of revered traditions and the pain of change. The installation is sponsored by the JCC Visual Arts League/Gallery at the J.

More information may be found online on the Trinity Street Players website or the Shalom Austin website.