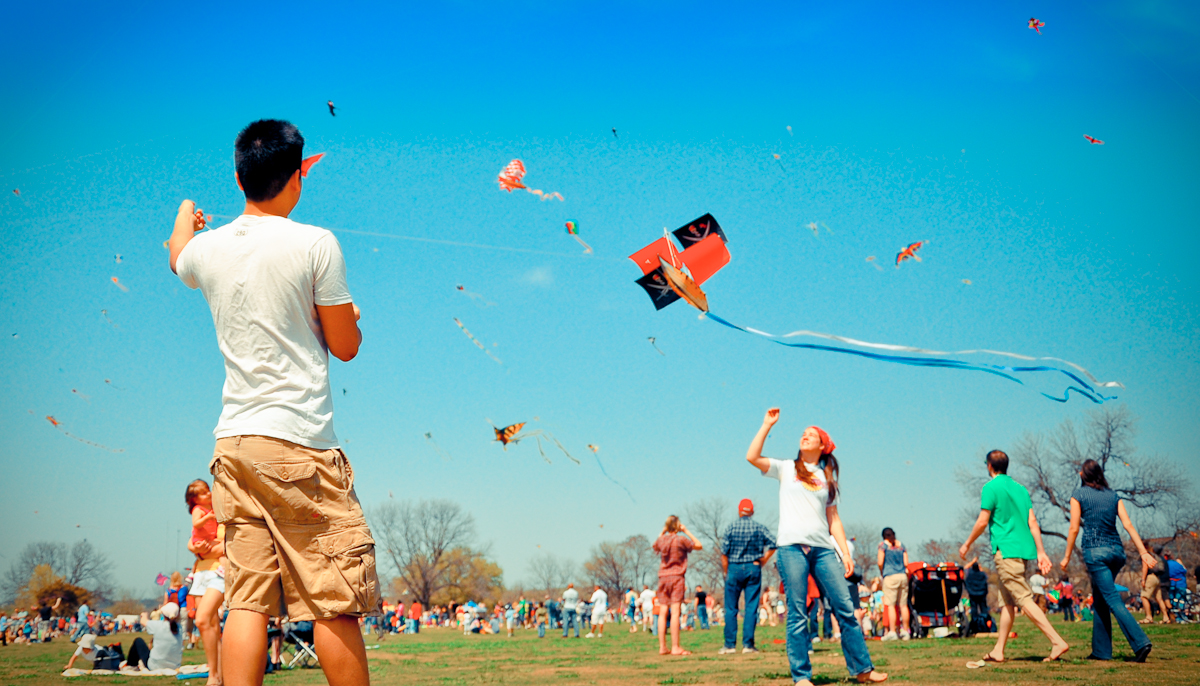 March is always a ridiculously busy and even more ridiculously fun month in Austin. The sun is usually shining, the allergens have calmed down for just a minute, and there are so many wonderful things to celebrate! Here are just a few of our favorite FREE activities in and around Austin this March.

Amplify Austin Day
March 1 and March 2 | All Day | Various Locations
Amplify Austin Day is our community’s annual day of giving. The 24-hour period provides an easy and fun way for our entire community to give together while helping local nonprofits.

Celebrating Texas Food
March 2 | from 9 a.m. to 5 p.m. | Capitol Visitors Center, 112 E 11th St
From delectable Tex-Mex to savory barbecue, Texas has a world-famous reputation for delicious foods. Although the flavors are widely known, what many people might not know is the roots of Texas food. A Diverse Blend: Celebrating Texas Food explores how diverse Texas communities Texas food. Explore unique items including Austin’s first published cookbook, home movies, vintage cookware and collectables from many food festivals from across the state.

It’s My Park Day
March 3 | Locations vary
The biggest city-wide volunteer event, It’s My Park Day, has expanded to a spring and fall event! Each year, thousands of volunteers work to improve parks and greenbelts throughout the city.

36th Annual Heart of Texas Regatta
March 3 & 4 | Festival Beach, 2101 Jesse E Segovia St
The Heart of Texas, A USRowing Nationally Recognized Regatta, is held annually in early March, making it one of the first sprint regattas of the spring. Austin Rowing Club has been host to the Heart of Texas Regatta since 1983 when the race was primarily for visiting college crews. The event has grown to include Masters, Open. and Junior events. Held on a seven lane, fully buoyed 1,000 meter course and state-of-the-art starting platform. Over 800 entries competed in the 2015 regatta for a total of over 1,500 competitors. FREE for spectators.

Texas Independence Parade
March 3 | from 7:30 to 11 a.m. | Congress Avenue
This year marks the 182nd birthday of Texas! Bring a lawn chair and a Texas flag to wave!

Explore UT
March 3 | from 11 a.m. to 5 p.m. | Campus of UT Austin
Held annually at UT Austin, Explore UT aims to inform students, parents, teachers, and community members from across the state about the importance of the public research institution and higher education in Texas. The day-long event invites Texans of all ages to experience robust research experiences, hands-on demonstrations and experiments, and participate in the richness of the university’s scholarship and knowledge. Explore UT seeks to broaden the horizons of students in Texas and motivate them toward achieving higher education after high school. It seeks to help parents and teachers encourage the excitement of learning and discovery, and welcomes alumni to reconnect with the institution that prepared them for their careers. View full schedule of events here.

MossFest 2018
March 4 | from 10 a.m. to 5 p.m. | Zilker Park, 2100 Barton Springs Rd
Music and a love for all people were defining attributes of Moss Pieratt’s life. These qualities drove the Pieratt and Jenkins families decision to stage a concert in Moss’s honor. Ultimately, the families wanted to stage a lasting event that Moss and other children would enjoy attending with their families. The 3rd annual MossFest will be held during the ABC Kite Festival in Zilker Park on Sunday, March 4, 2018, featuring various artists, vendors and associated child-friendly activities.

Sunday Funday: Off the Rack: Simple Fabric Dyeing
March 4 | from 1 p.m. to 4 p.m. | Neill-Cochran House Museum, 2310 San Gabriel St
Sunday Fundays at the Neill-Cochran House Museum feature historically-inspired activities for children, scavenger hunts in the historic house, and informal tours of the museum. Staff and volunteers will be available to help and provide supplies. FREE! This month they’re prepare their own nontoxic, food-based dyes!

Austin Barn Dancers
March 7 | from 7:30 p.m. to 9:45 p.m. | Hancock Recreation Center, 811 E 41st St
Contradancing in Austin originated when AFTM (Austin Friends of Traditional Music) started a jam session at Hancock Recreation Center (click here for map) over 30 years ago or so. Somebody (the name was lost in time) said “Hey, this is a good dance floor so let’s dance!” and thus the dancing started. The dancing went through several variations and around 1990 became predominately contradance.

To this day the Wednesday night dance at HRC is still a community dance with an average of 40-60 dancers and and occasional 75 dancing to the music of LOCO (Local On-Call Orchestra) – an open band of 3-10+ members with many excellent musicians, where anyone is welcome to come and play. The callers will call a variety of dances, whether it be contras, squares, circles, or whatever. This is a FREE dance courtesy of the City of Austin and Austin Parks and Recreation Department.

SXSW
March 9-18 | Various locations
The South by Southwest Music and Media Conference (SXSW) is held every March in Austin. A large multi-industry trade show exhibition, Music Gear Expo, and daytime stage performances round out the day while evenings are devoted to the SXSW Music Festival, which showcases over 2,200 acts ranging from the unsigned to the iconic. The festival itself is not free, but there are lots of FREE concerts and public events that do not require a badge to attend.

Hands on History
March 10 | from 10 a.m. to 2 p.m. | The Williamson Museum, 716 S Austin Ave, Georgetown
Come celebrate 170 years of Williamson County and learn about our namesake, Three-Legged Willie! This is a FREE, come and go activity.

Rodeo Austin Rodeo Rumble Kid’s 1K Fun Run (RSVP)
March 10 | from 9 a.m. to 12 p.m. | Travis County Expo Center – Luedecke Arena, 7311 Decker Ln
The Rodeo Austin Rodeo Rumble Kids’ 1K Fun Run is a FREE event for children ages 12 and under held in Luedecke Arena on Saturday, March 10, 2018. Beginning at 9:30am, children get the chance to race on the dirt where the cowboys and cowgirls compete each night! REGISTRATION BEGINS AT 9:00 AM AND THE FIRST HEAT OF RUNNERS BEGINS AT 9:30 AM.

Smart Home Open House Hosted by Yonomi
March 10 | from 10 a.m. to 6 p.m. | Yonomi Townhouse, 111 West 8th Street
Come join Yonomi, Schlage, Gentex, LIFX and more at the beautiful Yonomi Townhouse in downtown Austin, just a few blocks from the Austin Convention Center. We’ll have free wine and beer, snacks, home goods on display from local vendors, and demos of all your favorite Yonomi-compatible smart home devices. Come relax in the 100 year-old Yonomi Townhouse and learn more about how to bring your home to life with the latest smart home technology! FREE

Third Thursdays at the Blanton
March 15 | from 12:30 p.m. to 1:30 p.m. | Blanton Museum of Art, 200 E Martin Luther King Jr Blvd
Every third Thursday, the Blanton has a FREE themed event that features extended hours, multiple programs including Yoga in the Galleries, tours, and other offerings. Thursdays are always FREE at The Blanton.

Mighty Texas Dog Walk
March 24 | at 10 a.m. | Austin American Statesman, 305 Congress Ave
Teams and individuals can walk with their pooches to help raise money for Service Dogs Inc, who help turn strays into stars! This year, dress up as your most festive self in celebration of Carnaval!

Shadowing
February 5 – March 18 | Throughout Downtown Austin
The City of Austin Cultural Arts Division, part of the Economic Development Department, presents Shadowing, a public art installation that utilizes city streetlights to capture and project shadows of passersby. Supported in part by an Art Works grant from the National Endowment for the Arts, the installation will catalyze communal interaction and play, and create connections – person to person and person to city. Integrating art and technology, Shadowing underscores Austin’s reputation as a hub for innovation. Shadowing street lights will be positioned throughout downtown Austin at: South Congress Avenue, West Monroe Street, Rosewood Avenue, Navasota Street and East 11th Street. A map with detailed locations may be viewed here.

Lakeshore Learning Free Crafts for Kids
Saturdays in March | from 11 a.m. to 3 p.m. | Lakeshore Learning, 9828 Great Hills Trail
This learning products store has a wealth of educational merchandise for both teachers and students, alike. Each weekend they host a FREE craft activity for kids. March 20: What’s Next?  Clock; March 17: Springtime Finger Puppets; March 24: Be a Birdwatcher! Binoculars; March 31: Be Inspired Bracelet

Explore vaudeville’s influences from Roman mimes to the saloons of the American frontier. Learn what life on the road was like for the thousands of entertainers who traveled around the country performing in theatres that were part of a vast network of venues, and witness the mid-century revival of vaudeville’s relevance in musical theatre, radio, film, television, and the internet. See artifacts related to some of Vaudeville’s best-known performers—Harry Houdini, Mae West, W. C. Fields, Bert Williams, George M. Cohan, Burns & Allen, Tony Pastor, the Nicholas Brothers, Barbette, and more.

The exhibition features the Ransom Center’s extensive holdings of Harry Houdini, Tony Pastor, and Florenz Ziegfeld, among others, to show the development of vaudeville’s highly organized form and its long-lasting impact on contemporary film, television, and comedy. FREE